Counting every species at a mine site can give a true gauge of ecosystem health
By Peter Braul
May 17, 2017 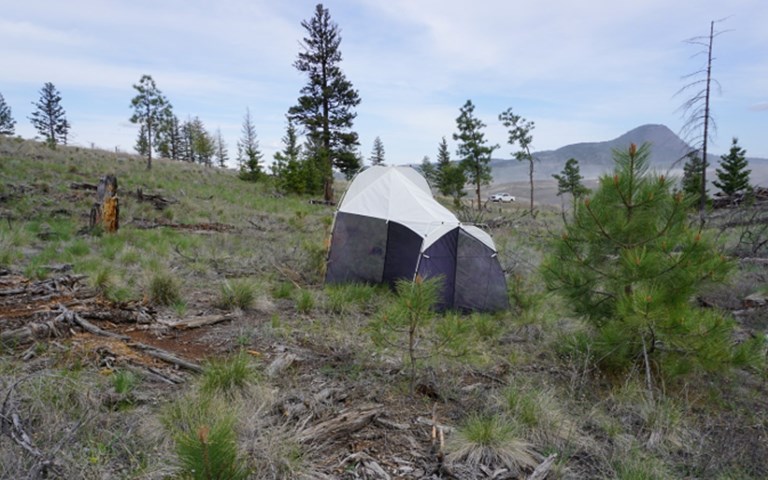 New Gold set up Malaise traps at two sets of sites in wetlands and grasslands on the New Afton property to collect insects a part of its plan to monitor biodiversity onsite. Chrystal Simon

When mines close, mining companies often rehabilitate them at a significant cost. But how healthy is the ecosystem after the company has left, and is the money well spent? Is counting large animals, such as birds or deer, a good enough indicator of the environment’s wellbeing? These were the questions Scott Davidson, manager of environment, social responsibility and tailings at New Gold’s New Afton mine, had as he attended an ecology and evolution conference in Kelowna, British Columbia, in 2013. Paul Hebert, the director of the Centre for Biodiversity Genomics at the University of Guelph happened to have the answers.

“The fact that you see a bird fly through a reforested habitat doesn’t tell you a whole lot,” said Hebert, who has spent his life collecting and identifying insects. Tiny bugs have a special place in the food web, because larger organisms constantly eat them and could not live without them. At New Afton, the number and diversity of insects could be a good indicator of how healthy a particular ecosystem is at any moment in time.

As part of his Barcode of Life project, Hebert has developed a major research facility to scan a small section of DNA, a so-called barcode, to identify species. “What I talked about at the conference was that here was a fast way, for the first time, to get a handle on terrestrial biodiversity as opposed to focusing on a handful of rapidly moving big organisms like birds and mammals,” he said.

Insects on the ground and in the soil, he said, “are immensely more diverse.” But that diversity is not necessarily obvious to the naked eye. Identifying each arthropod species accurately “simply wasn’t possible before. It would have cost a phenomenal amount of money and you would have to find a hundred taxonomists,” Hebert said.

What is there at New Afton anyway?

Hebert and Davidson began working together almost immediately after the conference. Later that same year, Davidson sent Chrystal Simon, an environmental technician, to set up Malaise traps at two sets of sites in wetlands and grasslands on the New Afton property. Each set included a control site at an undisturbed area of the mine, and an area that had previously been reclaimed. The traps look like small tents with a large opening at the bottom that allows insects to enter, after which they are funneled upwards towards a collection bottle full of ethanol, where they are preserved.

Every week, from spring to fall of 2013, Simon collected the samples and sent them away to the University of Guelph for analysis. The results were remarkable: the sites averaged roughly 1,300 specimens each per week. That compares to 106 specimens collected each week at Pacific Rim National Park on Vancouver Island and 317 specimens per week at Banff National Park. Furthermore, while both wetland sites captured a similar number of specimens each week, the reclaimed grassland site collected roughly 45 per cent fewer specimens, perhaps indicating a heightened sensitivity to the mine’s activities. Five species of spiders that had never been identified in British Columbia before were found to exist on the New Afton site.

“I was pleasantly surprised,” said Davidson. “We had no preconceived notions of what we would see. We figured we’d let the numbers speak for themselves.”

To accurately determine if a specimen belongs to a certain species, Hebert had to find a section of DNA that exists in every animal species, shows little variation in individuals of the same species and possesses marked differences between species. The right section happens to code for cytochrome c oxidase, a gene region that codes for an enzyme in the mitochondria that helps with electron transport. This gene shows so little variation within a species that once Hebert’s lab sequences a single individual of a species, they can be sure it represents the entire group.

The team is presently waiting on more numbers from a follow-up study they did in 2016. “We’ve added pitfall traps, focusing more on millipedes and other ‘creepy crawlies,’” said Davidson. They also expanded the scope of research to include grasslands off the New Gold property in collaboration with Thompson Rivers University and the Nature Conservancy of Canada.

Lauchlan Fraser, a community and ecosystem ecologist at Thompson Rivers, was the organizer of the 2013 conference, and has worked with New Gold to monitor a number of grassland sites in the Kamloops area outside of the mine property. He has been involved with the company for the past eight years. His specialty is “assembly rules,” which determine how an ecosystem comes together after a disturbance, and said mine closure gives a unique opportunity to scientists to study environments in a before-and-after context. He also said the technology Hebert has developed “has definitely changed the direction” of his research, and will only grow in importance in his work.

The technology surrounding genetics has gotten much better, but there is still a very hands-on element to the analysis at Hebert’s lab, which represents a $100-million investment in staff, buildings and research infrastructure. “We have about $10 million worth of hardware: sequencers and robots to handle DNA extraction,” he said. “We also have about 100 people working here who are specialized in different parts of the work flow.” Once a vial full of bugs is sent to Guelph, a technician removes one of the legs from each specimen to have its DNA sequenced and preserves the rest. It is a process that takes time, but the other option is classifying 4,000 bugs by eye.

“The beautiful thing from the mine’s perspective is that it’s pretty easy,” said Hebert. The cost of the analysis at New Afton in 2013 was between $30,000 and $40,000, estimated Davidson. That did not cover the sampling time or equipment they needed, but Davidson said he feels it was a worthwhile investment. “We see genomics and the application of this type of technology as growing in the next few years.”

That is something Hebert is preparing for by driving analytical costs down at his facility in an effort to be the “Kodak film processing lab” for ecosystem assessment through DNA barcoding. The first years of operation have been more costly because work has focused on building the DNA barcode reference library. Once species are entered in the catalogue, new analytical approaches can be employed that will simply match newly collected specimens to their DNA on file.

As mines continue to spend major money on reclamation, Davidson said, DNA barcoding will only become more important. “To me it’s always been one of those questions about restoration and reclamation: we can grow stuff, but are we truly achieving that objective of a healthy ecosystem?” The metrics provided by this kind of sampling program, he said, have the potential to inform stakeholder discussions, though he hesitates to say what role DNA barcoding will play in the future. “We need more sites doing it to understand the value of it,” he said. “Genomics in general has a tremendous upside in mining.”