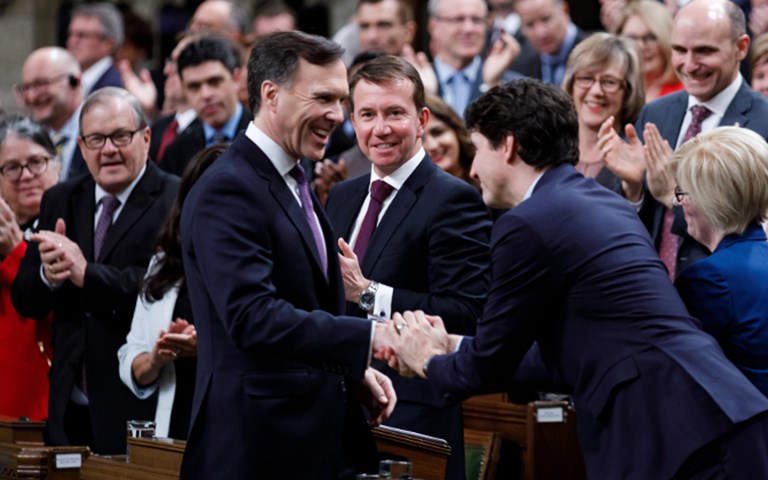 Finance Minister Bill Morneau delivers the 2018 federal budget in February. Courtesy of the Office of the Prime Minister of Canada

Updated on Nov. 22 with comment from the Association for Mineral Exploration and the Mining Association of Canada

Canada committed to a five-year renewal of the mineral exploration tax credit (METC) in its fall economic statement, after almost two decades of calls from industry groups for a multi-year renewal.

Since its implementation in 2000, the tax credit has been renewed yearly in each federal budget, which groups like the Prospectors and Developers Association of Canada have said does not provide stability for junior miners and their investors, as mineral exploration programs are carried out over several years.

The METC is a 15 per cent nonrefundable tax credit to incentivize investment in junior exploration companies. The credit’s flow-through share mechanism allows companies to transfer the expenses associated with their exploration activities to investors, who can deduct the expenses in calculating their own taxable income.

Discoveries at the Ekati and Diavik diamond mines in the Northwest Territories, the Voisey’s Bay nickel mine in Labrador, and the Eleanore gold mine in Quebec’s James Bay region were made with flow-through shares financing. Mining companies raised an average of $505 million of equity annually between 2010 and 2016 using the METC, according to the federal government.

“We are pleased that the government has heard our concerns about Canada’s waning competitiveness and adopted our recommendations,” PDAC interim executive director Lisa McDonald said in a statement. She said the five-year term “will help to provide greater certainty and boost confidence for investors.”

Association for Mineral Exploration president and CEO Edie Thome said in a statement to CIM Magazine that the renewal “recognizes the nature of multi-year exploration programs and provides greater certainty for companies, communities and investors as the benefit of longer term planning is realized.”

In its 2018 budget, the government had previously extended the tax credit until March 31, 2019.

Business will also now be able to immediate write off the entire cost of purchasing clean energy equipment, which MAC CEO Pierre Gratton said in a statement “will serve to incentivize investments in northern Canada where access to grid power does not exist, supporting a transition to low carbon energy alternatives.

“We are hopeful that this will also include the transition underway to move towards the use of electric haul trucks, and other heavy equipment.”

The fall statement included a total of $17.1 billion over five years in new measures to boost investment in Canada, including $14 billion over the same period in new tax incentives.

The government will also put $800 million toward its strategic innovation fund over five years.

Responding to trade tensions with the United States, Morneau said the government is establishing an export diversification strategy to boost sales to countries other than the States by 50 per cent by 2025.

It is also giving the Canadian Trade Commissioners Service an additional $60 million over the next five years to increase its online tools for exporters and market intelligence, and $44.1 million over the same time period to expand the service’s capacities in China, India and markets involved in the CETA and Trans Pacific Partnership trade agreements.

It will dedicate $100 million over six years to the CanExport program, which helps businesses reach new markets, particularly those within the CETA and TPP agreements.

The statement also said Canada’s marginal effective tax rate would be lowered to 13.8 per cent, down from 17 per cent previously, to compete with the U.S.’s deep cut to its federal corporate tax rate in 2017, to 21 per cent, from 35 per cent prior.

In response to reports from the Canadian Chamber of Commerce and government panels like the Advisory Council on Economic Growth, the government will establish a dedicated external advisory committee made up of business leaders, academics and consumer representatives to advise ministers and regulators on what regulatory changes will increase economic growth and industry innovation.

It is also putting $11.4 million over five years, and $3.2 million per year after that, towards a Centre for Regulatory Innovation, which will connect businesses with regulators and manage a collection of “regulatory sandboxes” – places where new systems are being tested that allow regulators to keep pace with rapid technology innovation.