UBC professor Greg Dipple aims to prove that tailings could be a mine’s secret weapon for reducing its carbon footprint
By Cecilia Keating
August 22, 2018 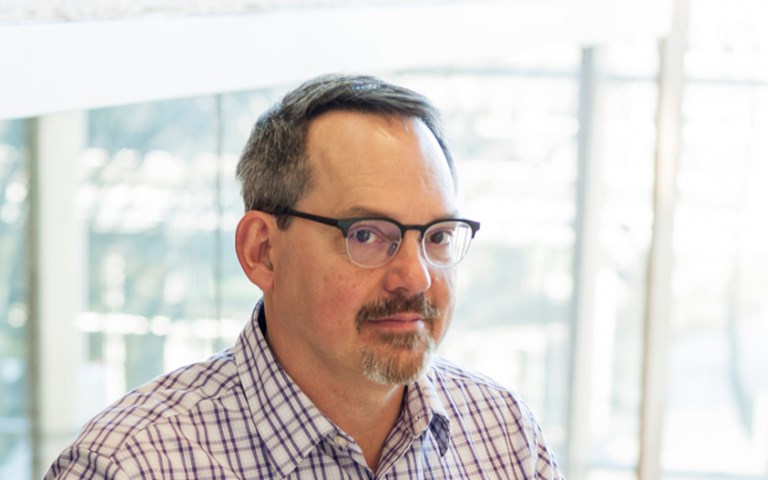 In order to avoid an increase of the global temperature by two and half degrees by 2100, the scientific consensus is that society must achieve net negative emissions ­­– in other words, pull more planet-warming carbon dioxide (CO2) from the air than we produce.

According to University of British Columbia Bradshaw Initiative for Minerals and Mining professor Greg Dipple, the mining industry could become a major player in helping society achieve this goal. For over a decade, he has been researching a process in which tailings waste naturally draws CO2 from the air and traps it into new stone formations.

Dipple’s focus has been on how to accelerate and optimize the phenomenon and recreate it on a large scale at mine sites. Next year the findings of his research will be applied to active mines for the first time.

The research brings together five universities across Canada and Australia ­– UBC, the University of Alberta, Trent University, the University of Queensland and Bond University ­– and has been funded by mining companies, the Natural Science and Engineering Research Council, Carbon Management Canada, the governments of British Columbia and Yukon, and Environment Canada.

CIM: How did you first notice carbon sequestration in mine tailings?

Dipple: It was total discovery science. Twelve years ago, we were visiting mine tailings piles to explore ways that waste could be used as a feedstock for high-temperature, high-pressure chemical reactors that would be used for accelerating a natural process called chemical weathering. Chemical weathering is part of the long-term carbon cycle and is when minerals take the CO2 from the air to create carbonate rock.

The initial idea was that mine waste would be fed into an autoclave or other reactor linked to a point source of CO2 from power generation. The project fell by the wayside when we realized recreating the process on a large scale would be too energy-intensive and expensive to be beneficial.

However, what we did discover was that, at every site we visited, chemical weathering was already happening; magnesium silicate rock in the tailings waste was reacting with carbon in the atmosphere and forming a magnesium carbonate material. Our research quickly changed from characterizing the reactive materials as feedstock for a reactor to trying to understand the process by which they were capturing CO2 from the air. We wanted to understand the process’s limits and see if we could accelerate it enough to significantly offset the total emissions of a mine.

CIM: Carbon sequestration normally occurs over thousands or millions of years; why was it happening so quickly in tailings facilities?

Dipple: It is fundamentally linked to the mining process, because when you crush ore into a fine size to extract commodities like diamond or nickel, you increase the reactive surface area around a millionfold. And so, a reaction that takes a million years happens in one year.

CIM: How can the reactions in tailings facilities be accelerated?

Dipple: The first way is to increase the amount of material needed for the reaction ­– in this instance, by optimizing CO2 transport to reactive minerals. And that one is easy, given that humans already know how to move air (e.g., for heating and air conditioning), and it’s not expensive. To do this, a mine can flow cooled exhaust from its powerplant into its tailings pile or integrate it into the tailings processing circuit. If a mine doesn’t have a powerplant, they can buy CO2 from companies that provide direct air capture services. Another way is to capture CO2 from the air.

The second way to speed up the process is by increasing the reaction rate. In our research, we discovered a class of minerals that release magnesium much faster than anticipated, which we refer to as labile magnesium.

We are in the process of identifying what type of deposits have high labile magnesium content, using exploration reports and geochemistry at different mine sites to generate 3D mine models of reactivity to CO2. We’ve come to appreciate that the reactivity of a rock is highly variable in a single deposit.

CIM: What types of mines are likely to be most suited to this process?

Mines that are in hot and dry climates are best for air capture because at the end of the day, it’s the evaporation of the water off the surface of the tailings pond that drives mineral precipitation (because water blocks the tailings access to CO2). As we develop new approaches to accelerate these reactions, we will optimize processes for other climates.

CIM: What have been key findings along the way?

Dipple: In the laboratory environment, we fed air with 10 per cent CO2 ­– like you get from a power plant ­– to highly reactive material and made rock in 200 hours (a little over eight days).

In field tests, we discovered BHP’s Mouth Keith open-pit nickel mine in Australia was accidentally capturing 40,000 tonnes of CO2 per year by direct capture from air and turning it into minerals. That mine’s total emissions are about 350,000 tonnes ­– so it was unknowingly producing an 11 per cent offset on their total mine greenhouse gas emissions in their tailings pile!

We also demonstrated that a mine could significantly increase the amount of carbon sequestration in a tailings storage facility by simply turning the taps on and off in a different way. Mount Keith’s tailings facility had five alternating spigots spewing out waste. Often, two were open at once. Essentially, they were burying their reactant material ­­– the labile magnesium ­­– before it reacted. We demonstrated that if those taps were turned off and on more frequently, the individual layers of tailings were thinner, and those thin layers could react with the air, doubling the amount of carbon sequestration taking place.

CIM: What stage is the technology at now? Have you constructed any purpose-built systems?

Dipple: When the resource sector crashed, we had eight years where we lived off government funding and spent most of our time developing new approaches in the lab.

We’ve seen our research skyrocket in the last two years, given that the resource sector is now booming and there’s a stronger belief in a carbon tax. Next year we will begin testing our acceleration approaches in active mine sites.

De Beers recently declared that they want to be the first company to have carbon-neutral mines, and we are the primary people they have engaged to do this. We start field trials with them next year.

We are hoping to help retrofit existing mines but also optimize mine tailings design for carbon capture and storage in future mines.

CIM: Why is this research important?

Dipple: As a society, we have already missed our chance to reach global warming targets by simply reducing our emissions. Our grandchildren are going to have to pull CO2 from the air, and if we can identify the right materials, we can use existing technologies in mining to do that at the scale of billions of tonnes of CO2.

Of course, there’ll also be brand new technologies, but mining will probably be in the mix; it’s a proven technology, and the costs are not huge. And by 2100, mining will look much different.

This technology is going to fundamentally change the scale of mining and the face of the industry. In the future, mining may be viewed as something that’s essential for environmental sustainability.

CIM: What benefits does this technology have for mining companies?

Dipple: For mines operating in jurisdictions that have a carbon tax, this will be a revenue stream for them. While no jurisdiction currently recognizes carbon sequestration in mine tailings as a carbon offset, there is a protocol under review in one province  for green cement, which uses many of the same processing techniques. Once that protocol is established, we can use it as a framework to quickly do a second protocol. Our belief is that once one jurisdiction does it, others will follow quickly because they have an example to go by.

There are also co-benefits to this science around dust production, stabilization and cementation of tailings that are often as big as or greater than CO2 sequestration.

Given the huge competitive advantage this technology brings, we think it will get picked up quickly once one company invests. If we can be part of the first carbon-neutral mine – that would be a very important step. I’d love to be a part of that.