Strength in numbers When it reached capacity in 2015, Largo Resources’ Maracás mine became one of the largest primary producers of vanadium in the world

When it reached capacity in 2015, Largo Resources’ Maracás mine became one of the largest primary producers of vanadium in the world
By Eavan Moore
June 08, 2015 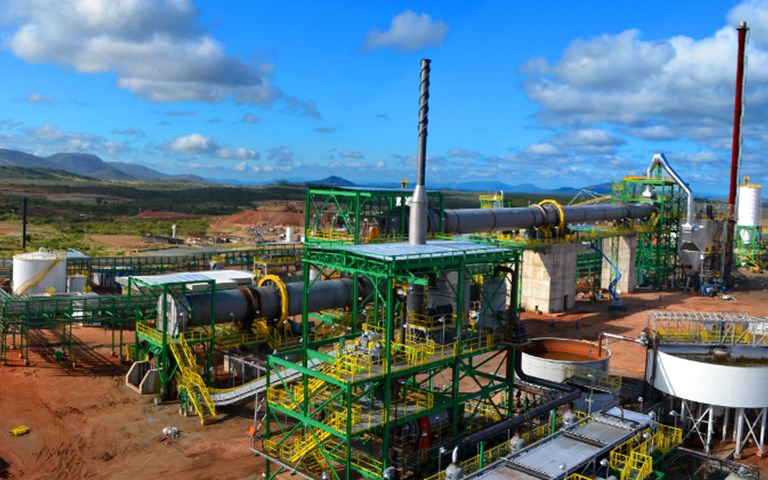 With few impurities and grades at 1.34 per cent, around double the global average, Maracás sits in a niche even within its specialized market: the vanadium pentoxide it produces can meet the demands of high-purity applications whether for plane wings, turbines or batteries.

“We have been complimented by two steel companies as of late,” said Mark Smith, who took over as Largo’s president and CEO in April 2015. He added that steel companies – the end users – tell him the vanadium pentoxide his company produces is some of the purest in the world. Primary vanadium producers are rare: most of the metal is a byproduct or co-product of some other commodity, often iron. The Largo team says it hopes to contribute up to a tenth of the world supply in later stages of its project and to add geographical diversity in a field dominated by China, South Africa, and Russia.

If expansions proceed as planned, the average production over the total mine life of 29 years will be 11,400 tonnes per year. Global vanadium production in 2014 was 97,000 tonnes.

Built on a budget

The mine design itself is specific to the mineral but not unusual for vanadium. Collectively, the team at Maracás has worked on every vanadium mine in South Africa, and the mining method and processing flowsheet hew to tried-and-true precedents for titaniferous magnetite deposits. The ore is mined from an open pit using conventional drill and blast methods by contractor Fagundes Construção e Mineração, then hauled by truck to the processing plant. The total surface production fleet includes one drill rig, two excavators, seven 36-tonne trucks and one dozer. 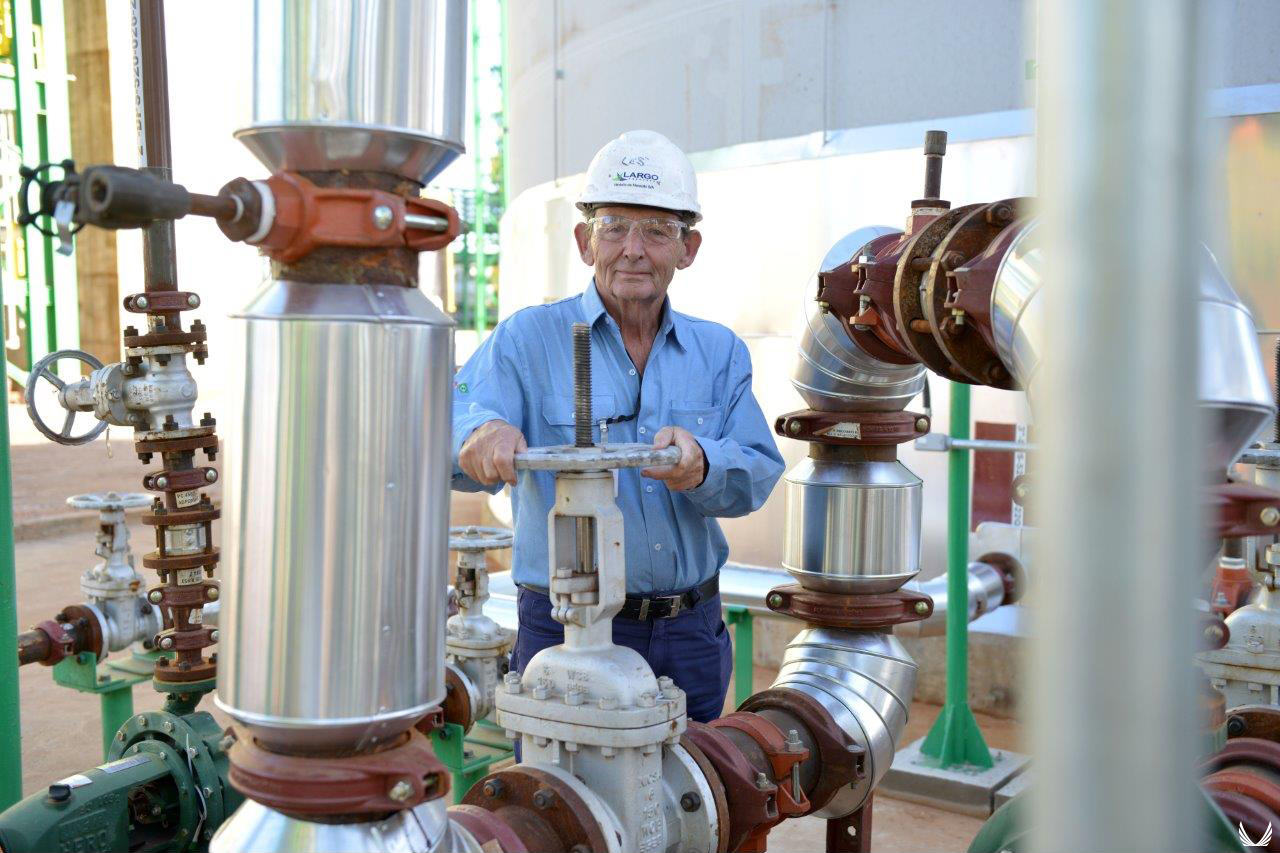 The operations team boasts a number of veterans of vanadium operations including Les Ford, who has decades of experience working on such projects in South Africa. Courtesy of Largo Resources

The ore first goes through three rounds of crushing. Initially, the plan sent it straight to the mill afterwards, but mine management decided during the commissioning stage to add two dry magnetic separation units that sort out the vanadium-rich magnetic ores from gangue. “We realized during commissioning that we can utilize our ore from the ore body much better by adding dry magnetic separators,” explained Casper Groenewald, technical director at Maracás. The ore has to get up to at least 44 per cent magnetics before it enters the milling stage; upgrading via dry magnetic separation means that magnetic contents as low as 35 per cent can be mined and fed through the crusher.

According to COO Michael Mutchler, dry magnetic separation could potentially drop the deposit’s cut-off grade, currently at 0.6 per cent vanadium in ore. “The first cut-off grade is always driven by price, and right now prices are low so there may be a trade-off there,” he said. “But someday, evaluating more on the vanadium content of the magnetic ore, we’ll be able to drop that cut-off grade.”

After dry magnetic separation, the ore passes through a tumbling mill then through a wet magnetic separation stage that further isolates the vanadium ore. The tailings from this stage contain small amounts of ilmenite and platinum group metals that could theoretically be recovered if the mine had the capital to install the necessary circuits. But for now the only saleable product from the ore is a magnetic concentrate with about 3.4 per cent V2O5.

This is roasted in a kiln with soda ash and sodium sulphate to produce a water-soluble compound, sodium vanadate. The hot material is cooled to 450 degrees Celsius, quenched, and then passed through a grate discharge mill for reduction down to particles 6 millimetres in diameter or smaller. That product spends 45 minutes in agitated leaching tanks filled with warm water and is then cycled through the leach thickener.

The next step is desilication. At this stage, aluminum sulphate is added in order to precipitate the aluminum and silicates out together, along with any traces of phosphorus and arsenic.

Ammonium sulphate is added to precipitate the vanadium as ammonium vanadate (AMV). This process generates sodium sulphate, which is recycled back to the kiln. The AMV is deammoniated and emerges as a reddish-brown V2O5 powder.

Finally, a fusion furnace heats the powder to 800 degrees Celsius. At this temperature, the powder melts and runs onto a water-cooled flaking wheel. The flakes are scraped off into a flake crusher to break up the larger flakes, then conveyed into a bin, from which they are loaded into one-tonne bulk bags ready for shipment. Maracás’ customer, metal broker Glencore, picks up the goods directly at the Maracás loading dock.

Vanadium is usually added to steel in the form of ferrovanadium (FeV), created by combining V2O5, aluminum and iron. If markets warrant, at some point in the future, Largo could install an additional plant to convert V2O5 to FeV, which would save the freight costs of shipping the V2O5 elsewhere for conversion and, potentially, back to Brazil. But for now, the economics do not favour that plan.

The tailings from vanadium mining are relatively benign, according to Mutchler. They are not easily handled from the operation’s point of view – a plan to dry-stack tailings was scrapped when the filter kept clogging – but also not acid generating.

Although Maracás managers said they would reach their 2015 capacity goals with the existing equipment, Largo is busy raising funds for expansion. Built on a limited capital budget during a recession, the facilities that began producing last August are already starting to reach their limits.

“It was, as all construction projects are, whittled down to the very minimum specs, the minimum costs that we could get financed and get a project built,” said Mutchler. “Now we’re finding pieces of equipment that we perhaps spec’d a little too tightly are now bottlenecks for us that require either rebuilding or upgrading earlier than we’d planned.”

The first round of capital spending ended in May 2014 at US$241 million. Now Largo is looking at raising another $50 million in 2015 and 2016 to open some of those bottlenecks. The kiln can comfortably handle any expansions on the mining side, but much of the plant will need to be scaled up to manage more throughput.

Largo’s 100 per cent offtake agreement with Glencore dates back to 2008. “When we were doing our construction financing, one of the requirements of the banks was to have a long term offtake agreement,” said Mutchler. Largo had a few selling points to offer Glencore: the material supplied by Maracás exceeds specifications, the production tonnages are large for vanadium and there are no other vanadium mines in the Americas. Largo was also willing to let its vanadium go for market price minus a discount, which at current prices means that Glencore is getting a very good product for cheap.

The starting quality of Maracás ore makes it a low-cost operation; in March 2015 operating costs for the month were down to US$3.91 per pound, which compares favourably with an average primary-producer cost of US$4.50. On the other hand, the vanadium market has been rough since last year, hovering below US$5 per pound of V2O5 all spring. Five years ago, long-term forecasts were more positive, but the slump in steel demand brought with it a drop in demand for steel additives. According to Roskill Consulting Group, vanadium is oversupplied and likely to remain so. 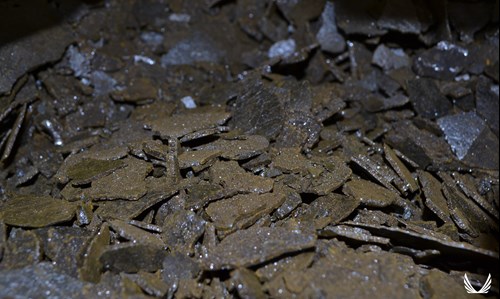 Glencore has committed to purchase all the vanadium pentoxide the mine produces for at least six years. Courtesy of Largo Resources

Smith says he does not believe vanadium will stay unsustainably low. “If you take a look at the last 10 years of vanadium pricing, V2O5 has not been below $5 a pound for longer than a 30-day period,” he said, “and that’s largely driven by the cost structure of vanadium suppliers.” Many producers quickly drop out when prices bottom, he added.

In the longer term, Smith foresees possible knock-on effects from struggling Chinese iron ore mines. More than half of the world’s vanadium comes out of China, most of it recovered from steel slag from Chinese iron ore. If low iron ore prices take out Chinese mines with high operating costs, then the balance of supply and demand could become much more favourable for mines like Maracás.

Smith is the former head of Molycorp, and he raised more than $2 billion for its Mountain Pass rare earth mine, so he has experience convincing investors he has a winning proposition. In Maracás, he said, “You’ve got an absolute world-class resource, you’ve got the lowest-cost production among primary producers in the world, and from a vanadium standpoint I don’t think you can find more intelligent people, and more experienced people.”

Steel dominates vanadium’s current fortunes, but the metal also has a potential market in cleaner energy: research into vanadium redox batteries suggests they could store the volatile output of wind turbines and solar panels.

“It’s a nascent market and makes up one per cent [of demand] currently,” commented Darcie Ladd, vice-president of investor relations at Largo. “Certainly, if it were to take off, it has huge potential for the market.” She noted that while Maracás has the high-grade material battery applications would require, not all vanadium producers could deliver.

For now, with no particular need to find markets for its product, Largo is focused on paying off its debts and bringing Maracás through its ramp-up successfully.

“We obviously have the start-up pains that one goes through with a brand-new facility, but those are being managed pretty well,” said Smith. “We’re starting to see consistent production day in and day out, which is very important. Our operators understand what they’re doing, they’re taking ownership of what they’re doing, and they’re building the pride of production into a facility – and that’s after just nine months. So we’re feeling pretty good about our production costs, ramping up production levels and getting our finances in order so that Largo is going to be a significant vanadium supplier for a long time.”