Nejat's passion for engineering and healthcare led her to the study of assistive robots
By Anne Millar and Mary Wells
September 14, 2017 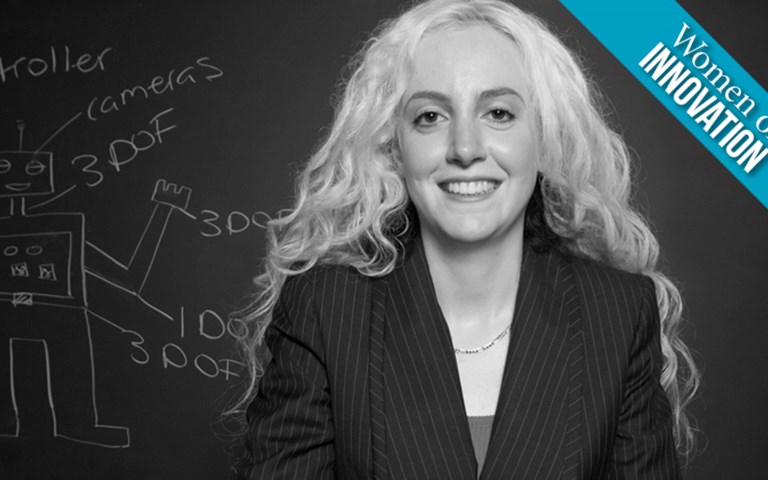 Goldie Nejat is an award-winning engineer in the field of robotics and mechatronics at the University of Toronto and the Toronto Rehabilitation Institute. Courtesy of Goldie Nejat.

Goldie Nejat is the Canada Research Chair in Robots for Society and an associate professor in the Department of Mechanical and Industrial Engineering at the University of Toronto (U of T). She is also the director of the university’s Institute for Robotics and Mechatronics and an adjunct scientist at the Toronto Rehabilitation Institute. Her leading research in the development of intelligent assistive robots is changing the face of robotics worldwide and has earned her the Professional Engineers Ontario and the Ontario Society of Professional Engineers Young Engineer Medal as well as the Young Engineer Achievement Award from Engineers Canada.

Why did you decide to become an engineer? When I decided to pursue undergraduate and graduate degrees in mechanical engineering at U of T, I did so because I felt I could build the engineering skills and knowledge needed to one day make an impact. I was motivated to make a positive difference in overall quality of life; I wanted to have an impact on society. I was looking at areas that would interest me but also would allow me to directly interact with society.

What types of robots are you working with? Brian is our one-on-one assistive robot. Tangy facilities group activities. Casper is designed to work in private homes and is a smaller robot. All three robots have been developed to help with activities of daily living. We have also developed multi-robots — robots that interact with each other as well as people. If you have a group of robots in a long-term care facility or in a search and rescue mission, you need to know who does what and when. We have a disaster scene in the lab in which robots collaborate to see where they should search for victims and generate a map of the environment. For the rescue robots, they can’t be fully autonomous because it’s such a cluttered environment and a very challenging environment for robots, so we have a human supervisor to share tasks. The robot asks for help when it needs assistance from the human. They are all team members. I wanted to try something different than the master-slave robot system design.

Is that a new approach? Yes, definitely in rescue robotics. Previously it involved a person tele-operating a robot in an environment. The person had almost all control. Some of the lower level tasks, such as moving from one place to another, the robot took care of but all of the high-level decisionmaking — where it should go, where it should look, or what it is looking for — had always been done by the human. When we did that, it was new. We called it semi-autonomous control and task sharing. To make it even more challenging we then had the robots learn from their experiences. We’re pushing towards autonomy. For long-term care, we are working on getting the robots to collaborate with each other. The whole idea of having multiple robots in that environment is new. Right now, you usually design one assistive robot and it does a single task. It might come to you (the user), but usually the user goes to it. This idea of having a group of robots assisting is something new. It has been implemented in the hospital setting with pharmaceutical transport, but now we’re trying it with this social interaction element. The idea of social human-robot interaction — you still have human caregivers but they play different roles — and having the robots take over some of the tasks to assist caregivers, is really new as well. We’re the first to develop robots for some of these applications.

Can you talk more about the development of your research into the use of robots for social interaction? I went to see veterans’ homes and nursing homes to understand one-on-one interactions between people. Care is so individualized. A robot can adapt its emotions or behaviours to a person through interactions and that seemed interesting to me because that’s what caregivers do to provide person-centred care. The robot has to be really intuitive so we looked at natural interactions between robots and humans and then using them for cognitive and social stimulation. Could a robot help a person play a memory game? Or help them eat their meals by prompting them through the steps of eating because they might get distracted or forget the steps? My research was based on two perspectives: the residents that needed help, but also the caregivers who had so many tasks to do. The stress level is very high in these jobs and turnover rates are high. Could you have a robot do the repetitive tasks? And would people interact with a robot? People were thinking about robots in hospitals, mostly for delivering drugs from the pharmacy, so there already was this question of how you could integrate robots into hospitals. Surgical robots is also an emerging field. But then there was this other element of actually interacting with patients, not just doing a task for them but socially interacting with them to get things done together. The robot doesn’t actually touch anything; it is non-contact based. It has the person doing the tasks for themselves to promote independence. I started peeling away the layers of social interaction, looking at verbal and non-verbal cues, and how you could get robots to recognize and display these cues. It taught me a lot about psychology and social behaviours.

What obstacles have you encountered in your career and how did you overcome them? At the beginning of my career, I was directing two research labs, one in the U.S. and my new lab at U of T. I was building my lab and research at U of T and resuming the funding process and recruitment of students. I would frequently travel back to the U.S. to run my other lab and work on my projects there. This went on for about three years. Since I couldn’t be in two places at once, this opportunity helped strengthen my multitasking and timemanagement skills. This has allowed me to take on a variety of different tasks throughout my career, including my position as the director of the Institute for Robotics and Mechatronics.

What have you found the most rewarding in your career? Working in the area of socially assistive robots. The first opportunity we had to have our robot Brian interact with older adults, and watching it actually interact with people. We have this robot and after all those years of blood, sweat, and tears from myself and my students, we got to see that first real interaction, how people were responding and embracing it, the real positive feedback about the need for the robot. In these situations, you see that all your work was really worth it. I think that is why I like having direct interactions with potential users of our technologies. You really feel like you’re contributing something to society and that it is going to make a difference. I’m also proud when my students graduate and enter fulfilling careers. They come in and learn with me and they grow. I get to see them ten years later and they are successful in their careers. You don’t get that opportunity in every career.

What advice would you give to a young woman considering a career in engineering? A career in engineering can take you anywhere. It’s a profession that empowers you to make an enormous impact, right here at home and globally. Pursuing your curiosity about the world around you and a love of science and math equips you to tackle some of the world’s most urgent challenges — from medicine and healthcare to clean water and renewable energy. You can be in so many different areas and it all fits within this umbrella of engineering. Engineering is a wonderful field for creativity, imagination, and inquisitive minds. I think this is a wonderful time to be a woman in engineering. More women than ever hold positions of prominence in STEM [science, technology, engineering, and mathematics] disciplines. Our dean, Cristina Amon, is a terrific example. She is an internationally renowned innovator.

How do you define innovation? Innovation is the research and development of new technologies, products, processes, and services that will have a direct, positive impact on the world and their translation and commercialization. The innovation should be impactful. In robotics, innovation is helping mold our future by providing unique assistance and services for the workplace and the home. I think Carolyn Wendell, then program manager at Google for Education, summed up innovation nicely in The Innovation Poem: “An inspiration → a revelation → a bold creation → determination → implementation → consternation, appreciation → iteration → celebration.” An innovator is a person who recognizes that a need exists and works hard to develop a creative or cutting-edge solution. Now more than ever, youth have the opportunity to become innovators in their communities, for example through STEM and robotics clubs. Innovators are everywhere. It is exciting.

Do you believe women bring a unique perspective to engineering? Diversity deepens the engineering creative process, enhances student experience, and enriches our profession with different perspectives. Each engineer brings their own unique perspective, but we all aspire to make positive and meaningful contributions to the world. That happens through true collaboration and inclusion of voices from different geographic, gender, economic, and cultural groups. In my research, multidisciplinary collaboration is crucial. I direct the Institute for Robotics and Mechatronics, which unites incredible researchers in fields from mechanical engineering to aerospace and healthcare. We need input and ideas from a diverse group of individuals to solve open challenges in robotics and mechatronics, from autonomous vehicles to search-and-rescue robots.

To learn more about Goldie and the other Women of Innovation, purchase the book here.

Next: Denise Pothier gives a voice to those who need it
Pothier is applying traditional Aboriginal knowledge to business frameworks to make them more holistic