Advances in the treatment of fluid fine tailings
By Graham Chandler
November 16, 2017 What to do with tailings ponds from oil sands mining operations has long been the industry’s leading environmental challenge. These vast ponds have grown to 220 square kilometres and now hold about 1.2 trillion litres of murky, contaminated water that will take many decades to settle out. About ten years ago, operators and researchers began seriously looking at ways to speed up the separation of fluid fine tailings (FFT) – mostly clays – from the water.

Progress has come gradually; some approaches made operational recently, like centrifugation and CO2 application, have become best practices. Others, electrokinetic remediation, for example, are advancing experimentally. And another, ionic liquids technology, holds some promise for the Holy Grail – eliminating the ponds altogether.

At the industrial scale

Centrifuges use centrifugal force to separate water out of FFT. Spinning it in a large cylindrical vessel at high speeds assisted by a coagulating agent forces the water out. Released water is returned to the tailings pond and ultimately recycled. The solids are transported to a dedicated area for land reclamation.

Syncrude began developing the technology with a lab-scale proof of concept study in 2005, then a pilot scale two years later. The full scale started in 2015.

According to Ken Bell, production manager of tailings and lease development at Syncrude, centrifuges produced 3.5 million cubic metres of the solid ‘cake’ material from a total of 4.1 million cubic metres of FFT put into the plant in its first year of operation. “The difference is the water that’s recycled into our tailings operation.” The solid material goes to a deposit where it is left to gain strength and become part of landscape reclamation.” 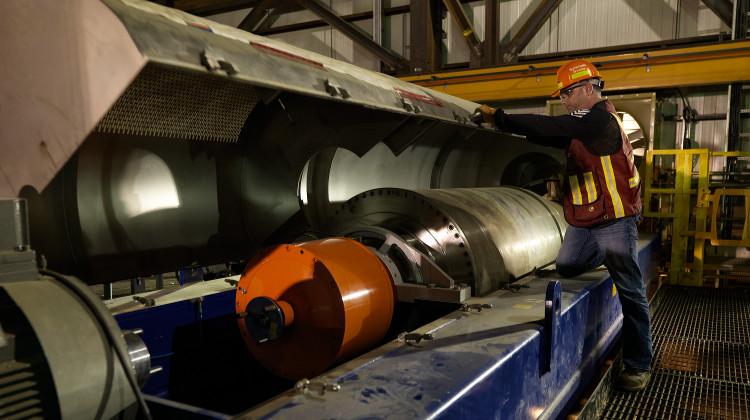 The first lab-scale test of centrifuge technology for tailings dewatering began in 2005. Today Syncrude has 16 in operation. Courtesy of SyncrudeBell said that because Syncrude’s 16 centrifuges are a new application of the technology, there is still a lot being learned. “We’re a little over two years into it and we are just working out some of the reliability issues to make sure we hit our required [throughput] rates.”

“CO2 changes the tailings water pH to the same as river water, allowing the solids – fine clays, silts and sand – to settle more quickly,” explained Joy Romero, vice-president of technology and innovation at Canadian Natural Resources. From 2009 the company continued research to improve the technology, and in 2015 implemented their current non-segregated tailings (NST) program.

NST adds two steps to the original process: cyclones and thickeners. “The tailings are pumped to the cyclones that remove the water from the coarse sand, along with thickeners that are used to remove the water from the clay fines,” Romero said. The streams from the cyclones and thickeners are combined in a pump-box and pumped to the tailings ponds where they are deposited as NST. “CO2 is added to the NST mixture just past the pump-box where it changes the charge on the clay surfaces, allowing the rock, sand and clay fines to bind together and further dewater.” The water is recycled and the solids used for reclamation.

The process is vastly more efficient than the old way. “The tailings footprint is 50 per cent that of traditional ponds,” said Romero. “Fifty per cent less water is required from the river and because warm water is immediately recycled back to the extraction plant, greenhouse gases (GHGs) are reduced.”

EKR involves inserting electrodes into an FFT deposit. As most of the fine particles are clays, which hold an electric charge, the resulting electric field causes the solids to collect and consolidate. The released water can be reused in the plant and the concentrated fine solids for reclamation.

Tests on oil sands tailings are underway in tanks at Western University in London, Ontario. “We’re running a process optimization program, refining our treatment techniques,” said Clare Armstrong, manager of research and development at ElectroKinetic Solutions (EKS), a company exploring the use of EKR for oil sands tailings treatment. “We have a number of test cells to address questions industry has communicated to us about how our technology is able to work in a scaled-up environment.” She said they are ready to begin engineering for a field demonstration with an industry partner, but, despite serious federal and provincial government commitments, the biggest barrier is getting industry to commit.

Ed Hanna, vice-president of technology development at EKS, said he anticipates that following a successful demonstration, all hardware could be deployed in situ for a 2 km-by-2 km pond. “The ideal application of this technology avoids the large costs associated with centrifugation or flocculation and their associated materials handling costs,” he said. The company already has a clear business plan, according to Hanna, including a field demo completed by early 2019 and commercialization in mid-2019.

What if you could take oil sands tailings ponds and separate out the FFT in hours instead of decades? Or, eliminate tailings ponds altogether by separating bitumen, water and the clay fraction at the processing stage? Such a revolution may well be in the cards if Steven Bryant, his team at the University of Calgary, Innovate Calgary, and their oil sands industry partners can successfully demonstrate how the use of ionic liquids can pull it off on a large scale. His team has already shown the process works – at the laboratory level – and a patent is pending.

The idea of using ionic liquids in the field is not novel. There have been several attempts to use this type of fluid, usually in combination with other materials or additives, for this and similar applications, though none have been commercialized so far. Bryant partnered with Robin Rogers, formerly the Canada Excellence Research Chair in green chemistry and green chemicals at McGill University, who has significant experience in developing ionic liquid technologies for various applications, including clean separations. The combination of their expertise is what makes this approach unique, designing, selecting and tuning ionic liquids specifically for this particular purpose, without requiring other additives or compromising the environmental and economical sustainability of the process.

“The liquids we have developed work in a fundamentally different way than the additives the industry is currently using,” explained Bryant, Canada Excellence Research Chair in materials engineering for unconventional oil reservoirs at the University of Calgary. “Currently they add a polymer to flocculate the small clay particles. The particular ionic liquids we are using [a type of organic salt, but proprietary at this stage] react with what is known as the ionic exchange capacity of the clay minerals themselves.

All clays typically have some partly negatively charged anions, and positively charged cations will be attracted to them and catch electrostatically to the clay surfaces.” Tuning the other component of the ionic liquid enables it to pull clay particles out of the aqueous phase, so they can be removed rapidly. Clean water would be returned to the environment, solids back into the reclaimed mines, and ionic liquids recovered and reused. Courtesy of the University of Calgary

The process he envisions would be to pump the liquid into a facility near the pond and add the ionic liquids to get separation of the solids, then possibly even recycle the ionic liquid. “So instead of dumping it into the ponds we envision a more proactive, sustainable approach.”

He admits the volumes are vast. “I imagine you’d have multiple combinations of pumps and lines, depending on if you want it done in 10 years or 20 years,” he said. “A key step is speeding it up by orders of magnitude; I think [cleaning existing tailings ponds] can be done in a decade.”

The team has held meetings with various stakeholders, including three applicants for remediation of existing ponds. Oil sands operator interest is keen. “We’ve got interest from a handful of oil sands mining operators,” said Bryant. “There will soon be an opportunity for funding to start scaling up our discovery.” At this early stage, particular companies have not yet committed.

From beaker to pilot field demonstration will be a significant leap. “What needs to be done is the iteration between the basics and what a large-scale operation might look like,” explained Bryant. “The experiments we’ve done in the lab are things like the effect of different liquids. We want to speed up that screening. So we get to ‘here is how the mechanism works.’ And in scaling up, the liquid that works best in the lab is not necessarily the one you’d want to use in a scaled-up process because the ability to recover may be different.”

That ability to recover and reuse it is still a leading question for the team. How easy will it be? “There are a lot of tricks you can play,” said Bryant. “One of the interesting features of ionic liquids is that there are so many different separation techniques, one being reverse separation. How we will do it? We are working on this aspect, but I have no doubt we can.”

The team is aiming to ensure water freed from the tailings will be pure enough for any of the environments anticipated by current reclamation plans. “We are working on that in the lab right now,” said Bryant. We know that we get the metal out and also the residual bitumen. Using simple measurements like infrared we see the high quality of the recovered water.”

In planning the process engineering part of the project, preliminary discussions have been held with engineering firms in Calgary, but Bryant said it would be premature to name them at this stage. “There is strong interest in putting together some kind of vehicle – a joint venture perhaps – to collaborate on developing both process and material to meet the large-scale challenges.”

Ionic liquids technology would not necessarily be restricted to cleaning up existing ponds. With advanced development, Bryant said he reckons it could be applied to achieve separation right in the processing plant, obviating the need for settling ponds. Or, further down the road, even eliminate water-based processing plants as we know them today. “We have shown in a beaker that you can, in one step, mix the ionic liquid with the ore,” said Bryant. The result? Separation into its three main constituents: sand, fine clay and bitumen.