Solving the selenium problemThe science behind selenium in the environment is young but for miners managing it, the element is an immediate concern

The science behind selenium in the environment is young but for miners managing it, the element is an immediate concern
By Alexandra Lopez-Pacheco
November 04, 2016

GE Water’s ABMet technology is a biological treatment approach which uses a packed bed reactor system. The ABMet process has been deployed at mine and coal power generation sites. Courtesy of GE Water

Between 1974 and 1984 something caused severe deformities in the fish and wiped out 19 of Belews Lake’s 20 species at alarming rates in North Carolina. The scenic manmade lake in the foothills of the Blue Ridge Mountains was built by Duke Energy as a cooling water reservoir for one of its coal-fired power plants. It took scientists until 1984 to figure out the unlikely culprit: selenium in the power plant’s effluent. At 20 parts per billion, selenium concentration in the effluent released into Belews Lake in the 1970s was well below the US Environmental Protection Agency’s (EPA) guidelines for safe levels at the time, of 35 parts per billion. In 1987, the EPA revised its recommended criteria for selenium concentration in freshwater to five parts per billion. Little did anyone realize at the time that over the next 30 years the problem of selenium poisoning would slowly, gradually grow into a conundrum for not just the power generation industry, but also for agriculture and mining.

The reason selenium was an unlikely culprit is that it is a naturally-occurring metalloid found in soil, rocks, shales, coal and phosphate deposits. In low levels, it is also a nutrient vital to all animal life. But when its harmless elemental form is disturbed by industrial activities, it oxidizes and changes chemically into a water-soluble species. When these accumulate in aquatic ecosystems, selenium becomes toxic and lethal. What constitutes toxic levels, including to humans, has been revised — and continues to be so — by scientists.

“The poster child of selenium poisoning, is the two-headed baby trout,” said David Kratochvil, president and CEO of BioteQ Environmental Technologies, which specializes in water treatment solutions for mining.

Selenium poisoning in aquatic ecosystems continue to this day in the United States and Canada. According to Environment Canada, elevated selenium concentrations in fish have been found around mining operations in this country, including coal mines in British Columbia and Alberta and uranium mines in Saskatchewan, compared with fish from non-mining areas.

In the summer of 2016, the EPA once again lowered its guidelines, this time to 1.5 parts per billion. In Canada, the Canadian Council of Ministers of the Environment (CCME) sets the recommended level at one part per billion. Recently, the B.C. government set it at two parts per billion. 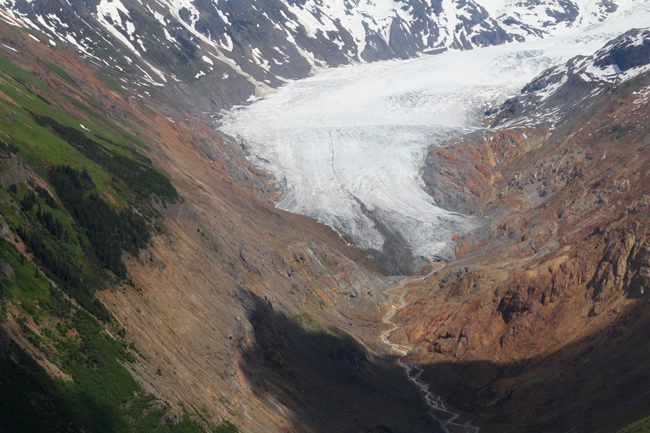 Seabridge’s Mitchell deposit, revealed by the retreat of the Mitchell glacier, contains an estimated 10 million ounces of gold as well as naturally elevated levels of selenium. Courtesy of Seabridge Gold

Achieving these new levels is easier said than done. Selenium is a slippery, multi-headed problem for mining. For starters, any technology has to treat large volumes of water to remove tiny traces of selenium. Any given wastewater can contain various selenium species with different solubility, toxicity and oxidization states that react differently to treatments and water temperature, and compete with other constituents. One of the most common species, selenium IV, is relatively easy to remove with traditional water treatment technologies. However, the other one, selenium VI, which has a very high oxidation state, is an enormous technical challenge.

In the last decade, many have attempted to crack the selenium VI problem with dozens of approaches. Some have tried physical methods, such as reverse osmosis, nanofiltration and ion exchange. Others have tried chemical methods to reduce selenium VI to selenium IV or elemental selenium. And some have developed biological technologies that use bacteria to do the heavy lifting.

One of these is GE Water’s ABMet technology, which uses a packed bed reactor system and activated carbon media. As water travels through the media, bacterial growth is promoted on its surface. The bacteria form a sticky biofilm that transforms the soluble selenium species into elemental selenium, which can be discarded in a landfill. “It’s very similar to existing media filter systems used to filter out solids in drinking water or industrial applications with the exception we’re using bacteria within the system, which specifically target and remove selenium from wastewater/runoff streams,” said Nelson Fonseca, the company’s global product manager. “The lowest selenium guarantee we have been asked to provide in the mining industry was 3.8 parts per billion, which we did offer upon a successful on-site pilot study that demonstrated that level of performance.

Veolia Water Technologies’ AnoxKaldnes systems, on the other hand, uses moving bed biological reactor technology. In this system, instead of a fixed media, free-moving polyethylene media is circulated in the reactor to grow the biofilm. Another approach is INOTEC’s electrobiochemical reactor system that uses electrons to provide the bacteria with energy to more efficiently transform the selenium VI to elemental selenium.

Since biological systems treat high volumes of water, they tend to be quite large, but companies are trying to address that. GE has introduced a modular ABMet with a 50 per cent to 75 per cent footprint reduction. Envirogen Technologies, which like GE has a fluidized bed reactor system, also boasts more compact systems that do not sacrifice effectiveness. Frontier Water Systems has developed a modular biological treatment system called SeHAWK.

Biological technologies are considered best in class, but as selenium accumulates in water systems, the best is increasingly not good enough to meet stricter regulations. Depending on all the variables, sometimes the technologies can reduce selenium to below five parts per billion. Sometimes it is 10 parts or more.

Technologies that can achieve the most stringent selenium thresholds are largely emerging ones, said Gulshen Tairova, founder and CEO of EnviraMet Inc., a company engaged in the development of water treatment technologies.

That leaves mining companies such as Seabridge Gold, whose Kerr−Sulphurets−Mitchell (KSM) project is one of the world’s largest undeveloped gold projects, in a tough spot. “Our KSM project site has naturally elevated levels of selenium,” said Brent Murphy, the company’s VP of environmental affairs. “As soon as we start disturbing the area for development of the mine, there is the potential for the selenium to increase in the aquatic environments downstream of the mineral deposits. We needed a method that was much more effective than the biological method to treat to low concentrations of less than one part per billion.” 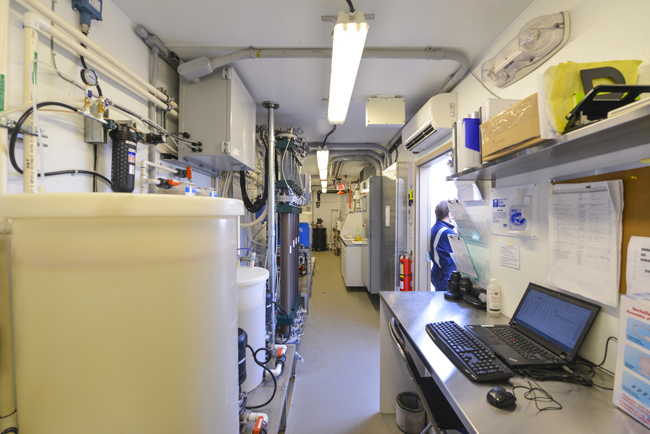 A view inside the mobile pilot plant used during the Seabridge Kerr-Sulphurets-Mitchell selenium removal pilot. Courtesy of Seabridge Gold

As well, the KSM project simply did not have the geographical space for a large biological water treatment plant. To find an alternative, Seabridge turned to BioteQ. The result was Selen-IX, a system which combines a low-cost ion exchange resin with electrochemical reduction to selectively remove selenium from mining wastewater.

In the system, water passes through an ion exchange resin that captures all selenium-producing final effluent, with residual selenium concentrations well below one part per billion. When the resin reaches its capacity, it is regenerated and the selenium stripped from the resin reports into a small volume of brine solution. This brine solution is then processed through an electro cell in which iron is released to react and precipitate selenium out of the solution into an inorganic solid containing approximately 50 per cent iron by dry weight. The brine solution, now free of selenium, is recycled back to the ion exchange process, thus eliminating any liquid waste typically associated with ion exchange. “We have tested the solids. They are non-hazardous and, in fact, we talked to steel manufacturers in the US who expressed interest in taking it to use as feed stock,” said Kratochvil.

Last year, BioteQ and Seabridge ran a pilot project as part of KSM’s environmental assessment approval process that consistently reduced the selenium to less than one part per billion. Seabridge and BioteQ are now in the process of designing a small scale Selen-IX treatment water plant.

“BioteQ was very instrumental in ensuring that we have a mining project,” said Murphy.

BioteQ, which is running a pilot scale plant for another mine in B.C., doesn’t consider the Selen-IX process to be a silver bullet.

“Every mine water is different and every mine has a different receiving environment. Consequently, the approach to selenium treatment must be site-specific,” said Kratochvil.

“The need for this is difficult for the industry to embrace because until recently lime treatment was relied upon as the treatment that can be applied everywhere for almost everything. This is no longer the case due to new regulations, and not just selenium regulations.”

BioteQ is not the only company that has turned to ion exchange, which until recently was dismissed as ineffective. Envirogen Technologies has developed a new High Efficiency Ion Exchange process it says is capable of removing selenium to less than five parts per billion.

In fact, many are rushing to solve the selenium problem with affordable and effective technologies that can meet the new limits, including pre-treatments for biological technologies. One approach some believe has potential is zero valent iron, although research is still ongoing. Even new chemical approaches are being considered. EnviraMet’s Tairova said her company has developed a new patented chemical system that can reduce selenium to less than one part per billion using stable chemicals at a cost comparable to biological methods. And over at the University of Waterloo, Andrew Holmes, a chemical engineering PhD student, is developing a solution using nanotechnology.

To understand the emerging science of nanotechnology requires wrapping one’s mind around the fact that, thanks to nanomaterials’ vast surface area compared to their volume, there are literally enough nanomaterials in something the size of a sugar cube to cover an entire football field. That makes the potential to treat large volumes of water to remove selenium traces with a small-footprint system enormous. “You can utilize the advantages of nanomaterials, including high surface area and high catalytic power in order to treat large volumes of ultra-low concentration wastewater more efficiently,” said Holmes. “The potential impact of this technology, along with minimizing both treatment costs and chemical usage, will provide a platform for treating water to high purity for the protection of aquatic environments.”

There is still much work to be done, but with the new regulations, awareness and interest in solving the problem, the solution could be getting closer.