Program encourages women at Goldcorp to risk taking the lead
By Kelsey Rolfe
May 19, 2015 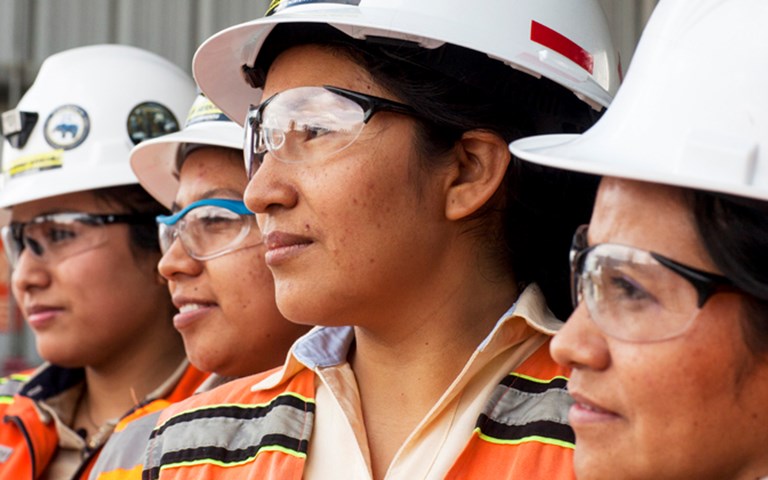 When, in 2007 and 2008, Anna Tudela toured Goldcorp’s recently acquired assets in Mexico and in Central and South America, she saw many women working on mine sites whose talents seemed underused and whose careers appeared stalled. They were, the company’s vice-president of regulatory affairs and corporate secretary, recalled, “shy or not pushing hard enough to be recognized,” and were limited in career advancement because of it. The experience compelled Tudela to help women develop their confidence and succeed at the company.

Women are a clear minority at Goldcorp. According to the company’s 2013 diversity report, women make up 12 per cent of Goldcorp’s overall workforce. Tudela said women comprise 20 per cent of the seats on the board of directors and 23 per cent of the executive management team.

Women currently represent 14 per cent of the Canadian mining sector workforce and 12.3 per cent of senior roles, according to WIM Canada. “I saw the need to do something about helping every woman at [Goldcorp], at every level of the company, to develop their leadership skills and potential,” said Tudela.

She founded the Creating Choices program at Goldcorp in 2010 to address the issue. The program, a two-day professional development seminar for women, runs year-round and helps participants build confidence and self esteem while encouraging them to set professional goals and take on leadership roles.

Since its inception, the program has graduated more than 1,200 women across all the countries Goldcorp operates in, and its success prompted Tudela to launch a new phase this year, aptly called Growing Choices. Following up on the skills taught in Creating Choices, the newly rolled out second phase teaches participants how to “brand themselves as leaders,” plan for career success, and network and build relationships that will help advance their careers.

Tudela said she feels the program is necessary because it encourages women to constantly take chances and ­opportunities they might not have otherwise. “A lot of the times we’re afraid to put our foot forward and say, ‘I want to take this challenge, I want to do this,’” she said, “because we feel we have to first make sure that we are overqualified before we say we’re ready.”

Boi Linh Van, the engineering team leader at Goldcorp’s Musselwhite gold mine in Opapimiskan Lake, Ontario, and a Creating Choices graduate, understands that feeling. She got involved with the program in 2011 when she was living in Vancouver, spending a year job-shadowing Goldcorp’s COO at the head office. But the decision to apply for that opportunity in the first place, she said, was a tough one.

“I didn’t know if I could do [the job], but a lot of my colleagues said, ‘Yeah, you should, it’s an opportunity and you’d be good at it,’” she recalled. “I had worked at the company for quite a number of years and it never occurred to me to think about moving forward, think about my career, [and] think about where I want to go.”

Van, who joined Goldcorp in 2003 as an engineering intern and described herself as “more introverted,” reached out to Tudela once she was in Vancouver and signed up for the program. She said it taught her to be more open to taking chances.

“It might’ve taken me years to take other opportunities [before], whereas now I know that it’s okay, even if I am not perfect or things don’t go as well,” she said. “You’ve gotta put yourself out there.”

When she was planning Creating Choices in 2010, Tudela invited 16 women, one from each of Goldcorp’s operations and regional offices, to Vancouver to brainstorm the most effective program for women in the company. Goldcorp partnered with communications firm The Humphrey Group and modified its existing four-module program to fit Goldcorp’s culture. “We needed to bring the program home where women could identify themselves with the examples and day-to-day life experiences,” Tudela said.

The result was a six-module program recorded in English and Spanish with video components.

The first few modules of Creating Choices teach women to build on their self-esteem, set future career goals for themselves and take chances that they might normally believe they are not prepared for. The last three focus on leadership-specific skills: communicating effectively and what Tudela called “achieving a leader’s presence.”

As well as Creating and Growing Choices, the program also has a third component, which pairs the women who have ­participated in workshops with a mentor in the company. Based on a woman’s resumé, experience, and career goals, Tudela pairs her with a mentor higher up in the company, and they have a meeting or a conference call once every two months for a year to discuss professional development. Both men and women can mentor, but Tudela said she makes sure mentees and their mentors are never working at the same operation.

Rather than bringing in external teachers for the program, Goldcorp took the approach of training women within the company to be program facilitators before sending them back to their respective mine sites to offer Creating Choices there.

Kaeli Gattens, a coordinator of change management in Goldcorp’s Mexico City office, was among those women. While working as an investor relations intern at Goldcorp’s head office in 2012, she met Tudela, who encouraged her to join the facilitators group.

“I’d started off quite young at the company, and part of those [modules], gaining confidence and learning how to use your voice, really spoke to me,” Gattens recalled. “Once I was in the actual course with the other women, I knew that was exactly what I needed to develop my skills and to grow as an employee at Goldcorp.”

After her internship, Gattens started working full time in corporate communications, and then in 2014 made a big move down to Mexico. She said the skills she learned from the program encouraged her to take the job, even though it was a very different role.

“It was a really tough decision to make because I thought I was going to be sticking with communications and investor relations,” she said, “but [the program] showed me [...] that it’s okay to jump around to different areas. It pushed me and challenged me to see that change management is something I’m really interested in.”

While Tudela pairs mentees with both male and female mentors, the Creating Choices program trainers are exclusively women, as are the participants. Though Tudela said she has heard men at the company express an interest in participating, she has kept Creating and Growing Choices a women-only program. The reason, she said, is having men present might discourage women from speaking up.

“You can see the mechanics anywhere,” she said. “You attend a meeting where it’s two women and 10 men, women do not say anything unless [...] they’re strong characters, but most of the time they go quiet. You put those two women with another 10 women and everybody at the table will be talking.”

For participants, a sense of friendship and a network remain after the program ends. “Over the course of the two days you gain a lot of confidence with the group that you’re with and it’s a very supportive environment,” Gattens said. “All the women are in the same boat, so it’s a safe place to work through all those different challenges that we have as women in the mining industry, and share stories and experiences.”