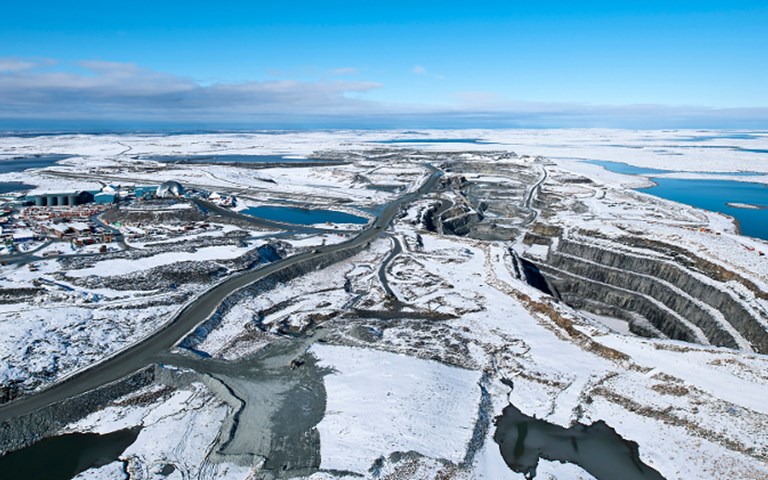 Absenteeism was a major problem for Agnico Eagle’s Meadowbank operation, as workers from local communities were not accustomed to a fly-in/fly-out lifestyle. Courtesy of Agnico Eagle

Operating the Meadowbank gold mine was never going to be easy. The fly-in/fly-out operation is located some 70 kilometres north of Baker Lake, Nunavut. What is now Agnico Eagle Mines’ highest-producing gold mine faced unique difficulties from the start. The inhospitable climate, non-existent infrastructure and remote location above the 65th parallel in one of Canada’s most undeveloped regions were all challenges that needed to be addressed. What was not foreseen was a more prosaic problem – how to help local employees adapt to a new lifestyle.

Local Inuit from seven communities in the Kivalliq region of Nunavut make up over 30 per cent of Meadowbank’s workforce of about 830 permanent employees. They arrive weekly on flights from each community to work their two-weeks-on, two-weeks-off rotations. The remoteness of the mine means, practically speaking, that if employees miss their ride, they will miss a week of work. And until last year, that was all too common. Absenteeism averaged out to 22 employees missing each day. Employee retention was even worse. Agnico Eagle had turnover rates of 42 per cent for new employees at Meadowbank.

Krystel Mayrand, human resources superintendent at Meadowbank, says the company did not anticipate the scope of the problem. “It was our first experience in this territory. Were we well prepared for that? Probably not,” she admits. “And were all the employees, all the people in the communities, prepared to come work for a mining company?

“It was culture shock, both for them and for us,” continues Mayrand. “We had to learn a lot about Inuit culture, and [they had to] learn about the work environment at Meadowbank.” Employees faced big changes in their day-to-day lives and sharp cultural differences from Inuit traditions. For most of the people who came to Agnico Eagle, any previous work experience was in regular eight-to-five, five-days-a-week jobs, often doing clerical or administrative work, or working on water or sewer trucks for their communities. “This was the first job for most of them working two-twos (two weeks on, two weeks off) and in a remote environment,” she adds. That was not easy for everyone.

Jody Ningeocheak is a haul truck driver at Meadowbank. She has been with Agnico Eagle for two and a half years and has adapted well. But she has seen people come and go. “My brother worked here once upon a time, for a little bit,” she says. But the separation from his family was too much. “He quit – he just went home. He was here for like four days. He and his girlfriend had just had a baby boy, so it was really hard for both of them.”

“It’s mostly personal reasons that they miss work – they don’t have a babysitter or something,” Mayrand concurs. “Their priorities are different. For southerners, if your daughter is sick, you will not necessarily miss work for that. But in Inuit culture, if your daughter is sick, you really want to go home and take care of her. The family is so important that if there is something little at home, their priorities change.”

Community events and traditional activities can also lead to absenteeism. When the hunting and fishing seasons open in the spring, there is a spike in absences at the mine. Community fishing derbies, with large cash prizes, also lure employees away from work. Often, when employees are out on the land, they are unreachable. It can take days before the company finds out where they are.

Correcting these problems required the company to change its approach right from the ground up. To start, Agnico Eagle tightened its hiring criteria. “To enter a training program,” Mayrand explains, “you have to have a really good file. You can’t have missed work before.” The company spends more time interviewing candidates and checking their references to ensure that the applicant’s priorities are in the right place.

Once accepted, the trainees will go through a tougher training program. A one-day trial before training begins weeds out some applicants, while stricter exams ensure that trainees are fully ready for work when they finish. Because the new system helps trainees better understand what to expect, only 76 per cent now finish the basic training compared to 96 per cent under the old system. Retention of employees who do finish, however, has improved from an abysmal 58 per cent to 92 per cent.

Community coordinators have also made a difference. The day before a rotation starts, coordinators call every employee in their jurisdiction to make sure they will show up to catch their flight. Many employees do not have vehicles, so the coordinators also provide rides to and from the airport, which can be as far as 20 kilometres from town sites. The coordinators are also a personal liaison between employees and management. “It makes it a lot easier to reach our people,” says Mayrand.

The final pillar of Agnico’s new approach is a clearly delineated career path for all employees. “The career path tells them exactly what they have to do in terms of experience, number of hours in the equipment, and the assessment they have to go through to progress to the next step,” explains Mayrand. “If a person is absent, then they don’t get the hours as fast. It’s really focused to motivate employees.” The company has also begun to focus heavily on their high-potential employees, as identified by their files and their performance. Since 2012, Agnico Eagle has increased the number of these employees it sponsors for apprenticeships in skilled trades, to a total of eight now.

All of these efforts have markedly improved things at Meadowbank. Turnover among Inuit permanent employees has dropped steadily from 25 per cent in 2011 to just 8 per cent year-to-date in 2013.

The transparency of the career path has also made it easier for women who begin in unskilled roles to access promotion, says Mayrand, adding that attitudes are slowly changing. The company now has 16 female heavy equipment operators, with four more in training. “For a married woman to work with other men away from home was something that wasn’t easy at the beginning,” notes Mayrand, “but now we don’t hear about it anymore.”

Ningeocheak had only worked at the post office and the school in her hometown of Coral Harbour before applying to Agnico Eagle. Now she boasts of being on the auxiliary relief as a haul truck driver, and of being on the emergency response team at the mine. She is training to become a bulldozer operator through the career path program and hopes to become a mine supervisor one day. “I don’t know what I’d be doing right now if I’d never applied for that training,” she explains. “There aren’t many jobs in my community.”

Lower turnover and absenteeism are also reducing Agnico’s staffing costs, just as the lower current price of gold eats away at profits. “Right now, we are (still) overstaffed,” notes Mayrand. “For ore truck drivers, we have 20 permanent positions because we have 20 trucks. But we actually have 24 employees on the payroll just because of absenteeism. Our objective eventually is to cut these four additional positions.”

But cutting extra positions is not the same as cutting employees, Mayrand concludes: “We would take these people, train them on other equipment, and move them along the career path.”