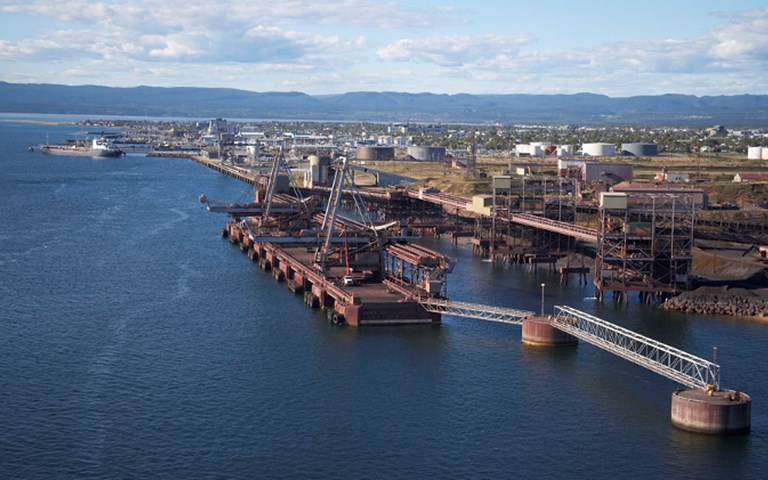 The class action suit in Quebec against Rio Tinto concerns the Iron Ore Company of Canada’s existing mines, rail and port facilities, including its operations in Sept-Îles, QC. Courtesy of Rio Tinto

In a significant legal precedent, two recent Supreme Court of Canada court decisions have cleared the way for Canada’s Indigenous Peoples to directly sue resource companies for damages over alleged violations of aboriginal title. Until now, native communities had no other option but to sue governments over such matters.

The precedent is the result of two separate legal actions seeking damages against two Canadian Rio Tinto subsidiaries – Rio Tinto Alcan and the Iron Ore Company of Canada (IOC) – one brought by First Nations groups in B.C. and the other through a class action by two Quebec Innu communities.

On October 15, the Supreme Court rejected Rio Tinto’s attempts to have both damage cases thrown out of court; the miner argued the First Nations in question had to sue the government to prove their aboriginal title rights before they could sue the company. Though the court did not rule on the challenges, it upheld the appellate court rulings from the two provinces, allowing the First Nations groups to proceed with lawsuits seeking damages and operational changes from resource developments that were established decades before the Australia- based mining giant owned the Canadian assets in question.

(Because of similarities in the cases, the Court released both decisions on the same day. The news of the late- October decisions was lost in the lead-up to the 2015 federal election, so the implications of the cases were underreported at the time.)

What has changed with the precedent, said Ravina Bains, associate director of Aboriginal Policy Studies at the Fraser Institute, is that indigenous communities no longer need to prove aboriginal title before moving forward on a civil suit seeking damages against a private party. The result is that this opens up many projects, proposed or existing for decades, to legal action. “This provides another avenue for First Nations to prove aboriginal title and it also opens up a new area of litigation that was only previously brought against governments,” Bains said.

In the past, an indigenous group could not launch a damages case against a private company before first proving aboriginal title, usually through complex, lengthy court cases involving governments – where the group had to demonstrate their ancestors exclusively used and occupied the land over time.

In the B.C. case, the Saik’uz and Stellat’en First Nations of north-central B.C. are now free to sue over the impacts of a dam built on the Nechako River in 1952 by Alcan to power an aluminum smelter in Kitimat. Rio Tinto acquired the dam when it purchased Alcan for $38 billion in 2007. “This opens the door to us not just having to deal with the government,” said Jackie Thomas, lands and resource manager for the Vanderhoof, B.C.-based Saik’uz First Nation, who confirmed they will not seek an out-of-court settlement. “It means we can deal with the company, including old proponents that were part of [causing] the cumulative effects on our landbase.”

In their lawsuit, the two B.C. First Nations groups are calling for Rio Tinto to change the way they operate the dam – including providing “cold water releases” from the dam into the river to better protect its salmon stocks from rising water temperatures, droughts or other events that would alter the river. The damages also seek to address the impacts to salmon caused over the life of the dam.

The Quebec case, brought by the Innu chiefs of Uashat mak Mani-utenam and Matimekush-Lac John, concerns the operations of the Iron Ore Company of Canada (IOC), which Rio Tinto acquired in 2000 and now majority owns (Mitsubishi also owns a piece). According to James O’Reilly, the lawyer representing the Innu, the Quebec natives are seeking a declaration from the court that they have aboriginal title over the areas and natural resources where IOC activities are taking place, including existing mines, rail and port facilities, and that the creation of those projects has “interfered” with this title. If successful, the case could be devastating for Rio Tinto: in addition to seeking $900 million in compensation, the Innu are seeking an injunction to halt Rio Tinto IOC projects on their territory – which is where all IOC activities take place. “Discussions with the company have never led anywhere to date, and a settlement out of court is very unlikely at this point,” said O’Reilly.

The trial, which is now proceeding to Quebec Superior Court, could last up to seven years.

Rio Tinto spokesman Bryan Tucker would not comment on the cases in progress, but insisted aboriginal relations are of vital importance to the company. He cited the Diavik diamond mine in the Northwest Territories, where nearly a quarter of its employees are indigenous, and a 2010 agreement with the Haisla Nation of northwest B.C., which established a framework for the two organisations to work together over the next 30 years to maximise the benefits of Alcan operations at Kitimat. “We are committed to doing the right thing,” he said.

O’Reilly said the October cases made it “crystal clear” that First Nations can sue companies for violating their rights without suing the governments as defendants as well. And this fact, he said, does not necessarily spell doom for resource companies seeking to develop projects in Canada.

“Whether you’re talking about a new or old project, failing to partner with First Nations when you’re on their land is the wrong way to go,” he said. “The answer is to seek consent upstream of project construction.”

O’Reilly said this approach has already worked well in certain areas of the country, such as in Northern Quebec, where industry has signed significant impact and benefit agreements with the Quebec Cree, as well as the Innu. “I don’t think this will be all doom and gloom for industry.”