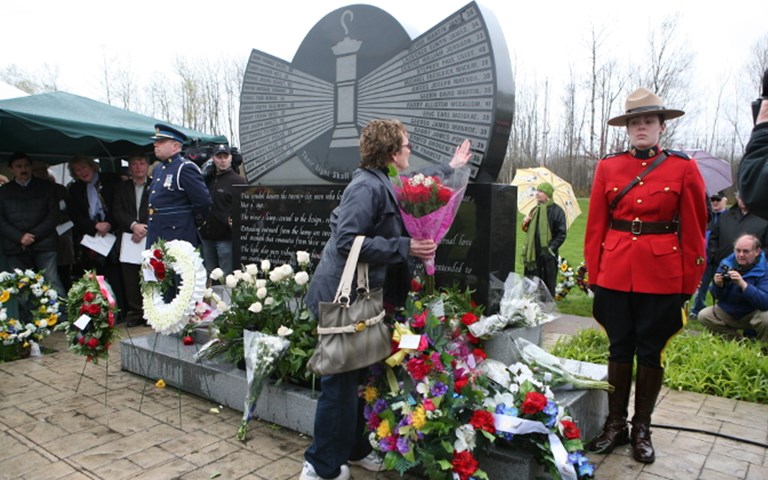 May marks the 25-year anniversary of the disaster that killed 26 workers at the Westray coal mine in Pictou County, Nova Scotia. While it remains Canada’s worst workplace disaster in recent memory and a tragic milestone for the industry, it also ushered in a new era in how both industry and government approach safety and corporate responsibility across the country.

In the early hours of May 9, 1992, as underground workers were finishing a four-day shift, methane escaped from the Foord coal seam, erupted into flames, igniting coal dust and creating a blast that could be felt for kilometres. Media from around the country descended on the small hamlet of Plymouth and the nation watched for days as it became clear that dragermen would find no survivors in the wreckage – 11 bodies were never recovered.

Included in the public inquiry that followed were accusations of gross negligence at the site. The mine’s owners and managers at Curragh Resources refused to testify. It also revealed that the unsafe conditions in the mine were known to both workers and overseers long before the explosion.

“The Westray story is a complex mosaic of actions, omissions, mistakes, incompetence, apathy, cynicism, stupidity and neglect,” wrote Justice Peter Richard in his final report, released in 1997, which excoriated the mine’s management, provincial regulators and politicians.

The explosion and its aftermath prompted a wave of provincial and federal legislation reform that sought to address serious concerns surrounding workplace safety and accountability in the mining industry.

The Nova Scotia Underground Mining Regulations were completely rewritten with significant involvement from mine operators, labour groups, federal and provincial regulators, and industry associations. “These regulations came into effect in 2008 and include specific provisions, as well as strict approval requirements, for underground coal mines. They incorporated the majority of recommendations from Justice Richard,” said Lisa Jarrett, a spokesperson for the government of Nova Scotia.

Federal Bill C45, often referred to simply as the Westray Bill, came into effect in 2004 and opened the door for criminal liability of organizations, corporations and their representatives, allowing the law to hold employers criminally responsible for negligence in the event of fatalities or serious injuries on the job.

Yet, none of Curragh’s top brass were ever held criminally responsible for the disaster. Now, after a quarter century, groups like the Canadian Labour Congress (CLC), who were instrumental in drafting Westray-related legislation, argue that not enough is being done to enforce criminal prosecution to protect workers, despite new laws.

“After the federal government made the change, they did absolutely nothing to promote compliance. They didn’t bring the provinces and territories together to talk about the significance. They didn’t train frontline law enforcement to look at workplace accidents as a criminal matter, or put enough resources to train crown attorneys to prosecute,” said CLC president Hassan Yussuf, likening the issue to drunk driving. “Health and safety laws are good, but the problem is that making companies simply pay a fine is just a slap on the wrist. There hasn’t been much deterrent in preventing accidents wholescale across the country. We feel that the code sends a clear message. If people know they may be held criminally responsible and go to jail, they might take this a little more seriously.”

Legislation in the wake of tragedy can only go so far – the ultimate goal is to permanently alter workplace safety culture to reflect realities and the dangers inherent in the extractive sector.

“It’s important to have good regulations and safety laws in place. But if they’re not enforced, they don’t mean anything,” said Coal Association of Canada president Robin Campbell. “I think we’ve come a long way, especially since the turn of the century, but it’s still a dangerous occupation with its risks. That’s why it’s important to make sure that people follow the safety regulations in place.”

Sean Kirby, executive director of the Mining Association of Nova Scotia, said the provincial mining industry has reduced its injury rate by 90 per cent in the past two decades. “You can’t bring back the miners who were lost that day, but our focus is on trying to learn from that terrible experience and honouring those miners by always doing a better job in terms of safety,” he said.

Several memorials will be held around the anniversary of the tragedy. The United Steelworkers (USW), who chartered the Westray miners after the accident, will be holding a morning vigil at the monument and several other commemorative events along with family members of victims.

“We made a commitment to them, all those years ago, that we would never forget them, and that their light would always shine. We will continue this work until we get justice for the miners and their families,” said Nancy Hutchison, health, safety and environment department leader with USW. “Now it’s about enforcement.”