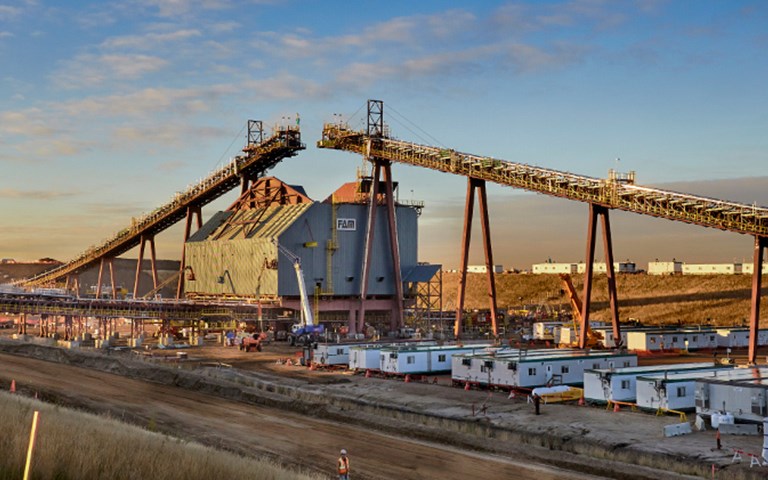 The ore preparation plant at Suncor's Fort Hills operation. A recent ruling from the Alberta Court of Queen's Bench siding with Suncor over random drug testing may provide hope to heavy industries in the wake of recreational pot legalization. Courtesy of Suncor

After more than a year of deliberation and months of legislative ping pong between the Senate and the House of Commons, Prime Minister Justin Trudeau said the country will federally legalize the consumption of recreational cannabis on October 17, after the senate approved the government’s legalization bill on Tuesday. What this will mean for those managing workplace safety, however, is still a work in progress.

The new law allows adults in Canada to legally possess and consume small amounts of cannabis and outlines the framework for the production, possession, safety standards, distribution, and sale of the drug. It also creates new Criminal Code offences for selling marijuana to minors and sets the minimum age for legal consumption at 18 – although provinces can opt to increase it.

Despite concerns voiced by players from heavy industries like mining, transportation and oil and gas, – where employees must operate large, dangerous equipment – the lack of precise drug-testing methods for cannabis, existing case law, and employees’ right to privacy mean any significant overhaul of workplace safety regulations is unlikely.

“Employers always had the right to prevent impairment, whether a drug is legal like alcohol or illegal like marijuana, so I don’t see the law changing,” said Rob Champagne, legal counsel for the United Steelworkers (USW) union. “Employers’ time is better spent trying to educate people about the problems with bringing drug and alcohol into the workplace and offering employees’ assistance in preventing that from happening.”

Goldcorp spokesperson Christine Marks wrote in an email that the company is “planning to take a proactive approach – educating ourselves, sharing information and providing education for employees.” She added that “impairment is still impairment, whether it’s a legally prescribed medication or a recreational substance. Safe production is our priority and that won’t change.”

Currently, mining companies and other employers in safety-sensitive industries must adhere to provincial workplace safety regulations and, if dealing with unionized workers, collective agreements. The law around drug testing employees is governed by a patchwork of decisions outlined in human rights tribunals and the courts, and by labour arbitrators. Historically, the large majority of random drug and alcohol testing policies have been struck down by arbitrators as an infringement of employees’ privacy rights.

Related: Mining companies wonder how to deal with excessive consumption of energy drinks

Last January, Champagne worked on the USW’s arbitration case against Teck Resources, one of the newest additions to the body of case law. An arbitration victory for the union put an end to a five-year random drug and alcohol testing regime at Teck Resources’ coal mines in British Columbia’s Elk Valley. The case – which ran over three years and involved 39 days of hearings, multiple expert witnesses and undisclosed amounts of money ­– does not bode well for mining companies considering implementing random drug testing policies once cannabis is legal.

“At the end of the day, Teck pulled out the stops and wasn’t successful,” Champagne said. “It signals to other mining companies that they are unlikely to succeed with random testing policies.”

However, the uncertain outcome of another case between Suncor and labour union Unifor bouncing through the courts in Alberta sends a more encouraging message to employers who want to implement random testing after October 17. While a provincial arbitration panel ruled that the oil sands giant must stop randomly testing its workers because it was an invasion of privacy, Alberta’s Court of Queen’s Bench quashed the ruling on the grounds that the panel should have considered evidence of alcohol and drug incidents involving all workers, not just union employees, and ordered the case to be heard by a new panel. The province’s Court of Appeals upheld that judicial review. Unifor then took the case to the Supreme Court of Canada, which in mid-June refused to hear it. The case will go through a fresh round of arbitration. An injunction from the Court of Queen’s Bench preventing random drug testing while Unifor appealed to the Supreme Court is still in place.

The lack of new laws on drug testing in the workplace post-legalization is not for lack of trying from groups like the oil and gas safety association Enform, which lobbied the federal government for regulation that restricts employees from using cannabis “in close temporal proximity” to work as well as in the workplace itself, and the BC Trucking Association, which called for a regulatory framework that would allow employers to conduct random drug and alcohol testing.

Earlier this year, a federal committee tasked with looking at whether and how to impose random drug testing on workers in safety-sensitive industries reached no conclusions, according to a report from The Canadian Press in March, and the Liberals have not indicated that they plan to federally sanction random drug testing in workplaces since. (The only place such federal labour rules exist is in the military.)

Mine management can safely resort to the two forms of drug and alcohol testing that are generally approved by arbitrators and human rights commissions for industries deemed safety-sensitive. The first is reasonable cause testing, where an employee can be justifiably tested if they look, smell or behave as if they are impaired. The other is post-incident testing, which applies when there is evidence that an employee’s condition may have caused a substantial accident on site. Random drug and alcohol testing is only permissible if an employer can prove a problem of substance of abuse in the workplace that needs to be controlled – something Teck failed to do in its arbitration case.

The issue of testing for cannabis is further complicated by the fact that, unlike for alcohol, no fair test exists yet. Current methods, through urine samples and saliva tests, are misleading. The psychoactive substance in cannabis that causes impairment, called THC, lingers in an infrequent user’s body for up to four days and a heavy user for eight weeks. The test therefore indicates prior consumption, not present impairment.

Champagne called current testing methods an “imperfect science,” and explained that a positive drug test cannot be the only indicator of impairment from cannabis. The failed test has to be matched with “something else, like slurred speech, staggered walking or glassy eyes,” he said.

Provincial health and safety organizations are working to update their regulations in the light of the difficulties surrounding testing and monitoring cannabis impairment. The Workers’ Safety and Compensation Commission of the Northwest Territories and Nunavut said it is currently developing a new definition of impairment that “will likely not focus on amounts of any substance but rather the effect and signs of impairment.”