The board published a 441-page report detailing adverse environmental and socio-economic consequences from the proposed development
By Sarah St-Pierre
May 19, 2022 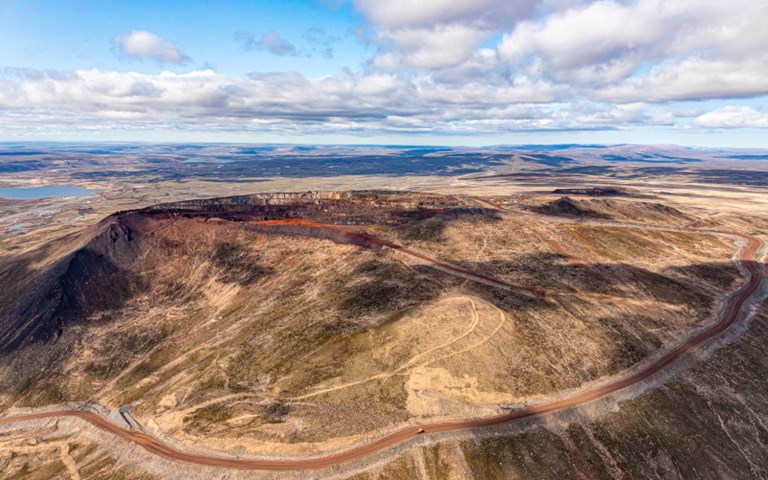 Minister of Northern Affairs Dan Vandal said he will reach a verdict on the expansion within 90 days of receiving the report. Courtesy of Baffinland.

The Nunavut Impact Review Board (NIRB) published on May 13 a report recommending that the Phase 2 Development Proposal for Baffinland’s Mary River mine not be allowed to proceed, citing potential negative impacts on the ecosystem as well as socio-economic concerns.

The recommendation was put forward despite the $2.4 billion economic threat to the province in lost royalties that the closure of the Mary River mine could present, which Baffinland has said was a possible outcome if approval was not granted. Other economic benefits, including financial assistance with community infrastructure and employment, are also on the line.

With the Phase 2 Development Proposal, Baffinland put forward plans to accommodate doubling the annual ore production from the between 4.2 and 6 million tonnes per annum (Mtpa) to 12 Mtpa. A change in the shipping schedule of ore from year-round to a five-month period during open water season and the construction of a second ore dock at the mine’s Milne Port for larger ships to dock would intensify shipping activity.

To support the production increase and facilitate transportation, a 110-kilometre North Railway would also be built between the mine site and Milne Port, replacing ore trucking. An enclosed crushing facility would be installed at the Milne Port site, and the accommodation camp at Mary River would be expanded.

The assessment conducted by the NIRB spanned four years. Interventions external to the board involved two dozen registered intervenors from organizations of interest, over 50 people participating in public hearings as community representatives and hundreds of attendees. Participants from the affected Pond Inlet, Igloolik, Sanirajak, Arctic Bay, Clyde River, Grise Fiord and Resolute, as well as a number of hunters and trappers association members, were part of the community representatives.

The NIRB found that it could not trust Baffinland to adequately prevent, mitigate or manage the potential adverse effects of the proposed increased production and resulting increased ship traffic after reviewing the measures proposed by the company and observing the state of its relationships with local communities and actors. Moreover, the report noted several parties challenged the socio-economic benefits from the mine, citing a track record of missed Inuit employment targets for the existing mine and potential job losses when Baffinland moves on from trucking ore and starts carrying it by rail.

The increases in shipping during the open water season constitutes a potential threat to marine wildlife such as narwhals, seals, walrus, fish and the broader marine ecosystem, according to the report. Increased volumes of iron ore being transported along the existing Tote Road and the construction of a new North Railway and the already-approved South Railway could also impact caribou populations and their movements.

Dust emissions at various sites related to mineral exploitation at the Mary River mine also raised concerns when it came to the quality of air, vegetation, freshwater and ice. The use of heavy fuel oil by increased ship travel would raise levels of black carbon emissions, impacting the snow and ice further.

In the chairperson’s foreword, Marjorie Kaviq Kaluraq highlighted that Inuit knowledge has not been meaningfully considered and applied by Baffinland so far. Impacts identified by Inuit communities, which go as far as “threatening food security and creating cultural losses for which communities cannot be compensated,” are already going unaddressed or dismissed.

“The trust necessary for effective collaboration has eroded and important working relationships between the communities, Inuit organizations, regulators, and [Baffinland] have been damaged in the decade after the [NIRB] approved the original Mary River Project,” also noted Kaviq Kaluraq.

One such example revolves around mitigation solutions for dust emissions, which are highly visible when it comes to iron ore. While Baffinland has acknowledged the issue, communities have been aggravated by the lack of progress and the company making the enclosure of the crusher contingent on the approval of the Phase 2 Development Proposal.

In response to the release of the report, Baffinland said it was surprised and disappointed with the recommendation. “Our Phase 2 proposal is based on years of in-depth study and detailed scientific analysis, and has considerable local support based on years of consultation with Inuit and local communities,” said CEO Brian Penney. The company said it will review the board’s recommendations before providing a more detailed response.

Minister of Northern Affairs Dan Vandal, to whom the report is addressed, thanked the NIRB and its Indigenous partners for the report on Twitter and said he, along with federal officials,  would be taking the time to review it before announcing a decision. He has previously stated a verdict would come within 90 days of receiving the report.

In the meantime, news of the recommendation was well-received in Pond Inlet, where a parade celebrated the report’s publication. Oceans North, a non-profit environmental group, which has warned Baffinland about the effects of shipping on narwhal populations, commented that “the NIRB’s decision recommending against this expansion, known as “Phase 2,” affirms positions taken by the most impacted Inuit communities.”