A new app provides 3D engagement for the Giant Mine Remediation Project
By Sarah St-Pierre
August 29, 2022 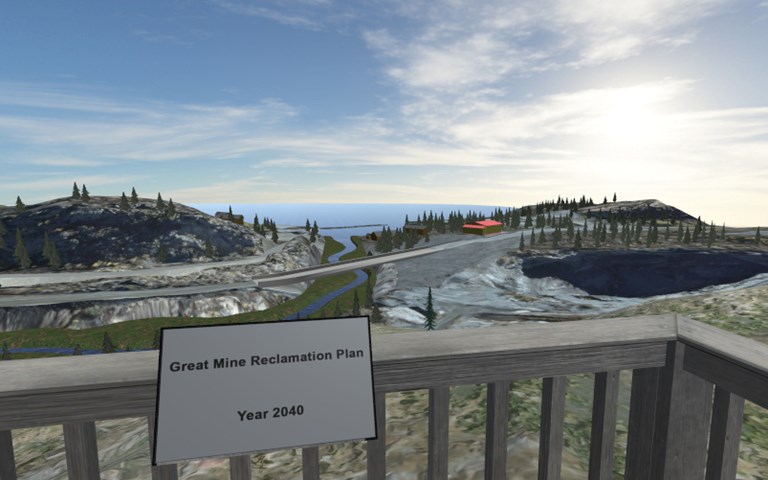 Users of the new Giant Mine app can see 360-degree immersive views of the future landscape after reclamation is complete. Courtesy of Clirio

The Giant mine was operational from 1948 to 2004, through which the ore roasting process released arsenic trioxide into the environment, leaving behind 237,000 tonnes of the toxic dust in underground chambers when it closed. The mine’s custody has since passed on to the federal government, which is now co-managing a $1 billion remediation project with the Northwest Territories government.

Because of the mine’s proximity to Yellowknife, Indigenous communities and the Great Slave Lake, the management and containment of the arsenic waste have been a source of concern for nearby communities. In the long term, arsenic trioxide is carcinogenic and can adversely affect the cardiovascular system, the nervous system, the reproductive system, bone marrow, skin, kidneys and the liver. It can lead to conditions such as anemia, dermatitis and impaired organ functions. It is also corrosive and at high enough levels can cause death.

Through the early years of activity at the Giant mine, unchecked arsenic pollution adversely affected the health of the nearby population, particularly that of the Yellowknives Dene who lived closest to the ore roasting facility.

The Giant Mine Reclamation Viewer app was designed to help people understand the government’s solution to the problem, which consists of freezing the majority of the arsenic dust in its stopes and chambers by circulating cooled liquid through underground pipes. Thermal siphons will keep the ground frozen in the identified areas by removing heat, all to prevent arsenic from leaking into groundwater. While removal of the arsenic was considered as an option, it was decided that the process and the subsequent transportation and storage of the arsenic trioxide would only increase risks of exposure.

Ongoing water treatment and monitoring will act as a parallel effort to mitigate the dust found in smaller quantities throughout the rest of the mine. Indeed, while remediation efforts at the Giant mine will be implemented over a period of 10 years, the project itself is defined for 100 years, with some arsenic management components being assigned to a care plan in perpetuity.

“Obviously, as you can imagine, it’s not at all feasible to take the general public into the underground of a mine such as this,” said Keith Lay, director of sales and marketing, Clirio. “So we use the visualizations as a way to show people what is happening in the underground without actually having to take them there.”

When users start up the app, they are prompted to find a flat, empty surface. The map of the site gets projected onto the surface through augmented reality on their mobile device, with highlighted areas offering more information about its particularities in both English and the Dene language. Switching to different views turns the map of the area into an underground model of the arsenic stopes, the mine tunnels and their relation to changing levels of groundwater.  Modelling of the freeze drift solution comes next, then followed by a simulation of what the site would look like in 2040, showcasing restored creeks, demolished surface buildings, covered tailings ponds and a new water treatment plant.

A variety of data sets, including LiDAR, GIS, CAD and underground measurements, were combined to create the augmented reality models. While Clirio originally worked with CIRNAC to provide in-person engagement in Yellowknife through the Microsoft HoloLens, a headset that allowed local residents to view the 3D models, the public stake in the expensive project led to the development of the app for wider access.

“I think that this is kind of a first of its kind initiative, certainly in Canada… Anyone with an Android or iOS device can go and download this for free and learn about what’s happening in our own backyard here in Canada,” said Lay. “All Canadians can now use this as an opportunity to learn what’s happening not only in our country, but with our tax dollars as well.”