Canadian Mining Hall of Fame introduces 2023 membersLeaders in sustainable development, exploration and valuation will be joining the Hall’s other 200 members

Leaders in sustainable development, exploration and valuation will be joining the Hall’s other 200 members
By Ashley Fish-Robertson
November 10, 2022 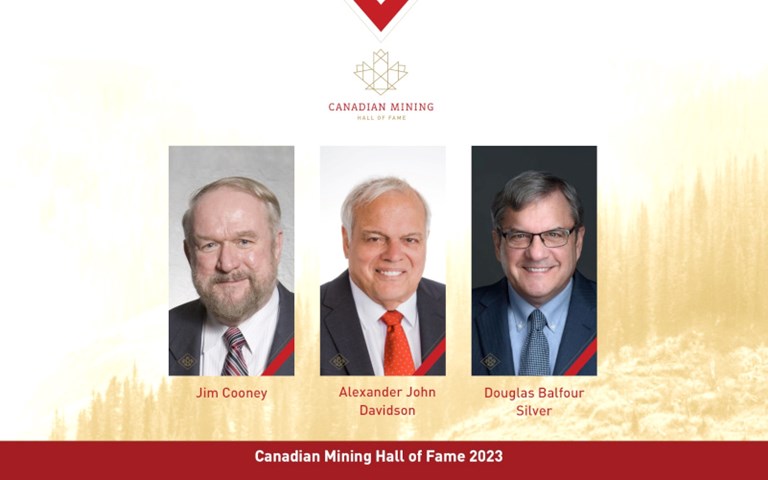 Three new mining industry leaders will enter the Canadian Mining Hall of Fame (CMHF) in 2023. These individuals are being recognized and celebrated for their accomplishments, contributions made to the extractive industry, and dedication to advancing the mining sector.

Jim Cooney, Alexander John Davidson and Douglas Balfour Silver will be inducted in May 2023. Last year’s induction was a noteworthy one, as it saw the 200th member welcomed into the CMFH since its founding in 1989.

“Our 2023 inductees are multidimensional; their contributions span many areas of the industry and their impacts set new standards,” said Janice Zinck, chair of the Canadian Mining Hall of Fame and executive director, geoscience and mines, of the Department of Natural Resources and Renewables, Nova Scotia. “The mining industry is at the forefront of the world’s energy transition and Canada is well-positioned to lead the supply of future-facing minerals and metals. What gives Canada a competitive advantage is our leadership examples, in part set by our 2023 inductees, who fiercely championed a better, more responsible, sustainable and successful industry.”

Born in 1942, Jim Cooney was considered a “non-miner in the mining industry” having initially been a philosophy and political science student who studied at Georgetown University, and later on, an East Asian studies student at the University of Toronto. From the mid-1990s to his retirement in 2006, Cooney played a crucial role in establishing sustainable development policies and practices in various national and international forums serving the mining community. Coining the term “social licence to operate” in 1997, he soon saw this concept flourish within the extractive industry. From 1982 to 1987, Cooney worked as a manager of government affairs for Placer Development and as a resource policy analyst with the Federal Economic Development Coordinator. In 1988, when Coney took over as director of international and public affairs for Placer Dome following the Placer Development and Dome Mines merger,  the company was the first miner to extensively integrate sustainable development practices. Cooney led these efforts, introducing two innovative sustainability initiatives at the Las Cristinas and South Deep mines. Cooney is a past recipient of CIM’s Award for Excellence in Sustainable Development in 2011, and AME BC’s Robert H. Hedley award for social and environmental responsibility in 2016.

Born in Montreal during 1951, Alexander John Davidson attended McGill University, receiving a -master of science degree in economic geology. Not long after graduating, Davidson led an exploration program for a predecessor of Cameco, drilling the discovery hole at Saskatchewan’s McArthur River uranium deposit. During 1980, he was employed by Ontario’s Falconbridge Copper, where he aided in the discovery of the Winston Lake zinc deposit, which was inproduction from 1988 until 1999. In 1993, Davidson joined Barrick Gold and worked alongside former CMHF members Peter Munk and Robert Smith. He played a significant role in the expansion of the company’s total resources, and contributed to the company’s discoveries, mergers and acquisitions. Davidson’s accomplishments over the years led to him receiving the PDAC’s prospector of the year award in 2003, later followed by CIM’s A.O. Dufresne Award in 2005, and most recently, the SME’s Charles F. Rand gold medal in 2019.

Born in 1955 and raised in New Jersey, Douglas Balfour Silver graduated from of the University of Arizona with amasters in economic geology. During the early 1990s, Silver was president and owner of Balfour Holdings, where he played a crucial role in drafting industry valuation standards, including the CIMVAL Code. Silver’s accomplishments over the years include the launch of the International Royalty Corporation, which was later sold in 2010 at a value of $749 million. Following this sale, Silver was employed by Orion Resource Partners, where he played an active role in increasing the company’s royalties. In addition to this role, Silver also founded the Denver Gold Group, whichconnected gold companies with institutional gold investors. He is a past recipient of several awards, including one from the Society of Mining, Metallurgy and Exploration. In 2018, he was inducted into the U.S. Mining Hall of Fame.

The new members will be celebrated at CMHF’s annual gala dinner and induction ceremony that is set to take place on May 24, 2023 at The Carlu in Toronto.