Continental Gold aims to bring its Buriticá project to production in two years – an important milestone for the company and for Colombia
by Ryan Bergen
December 19, 2017 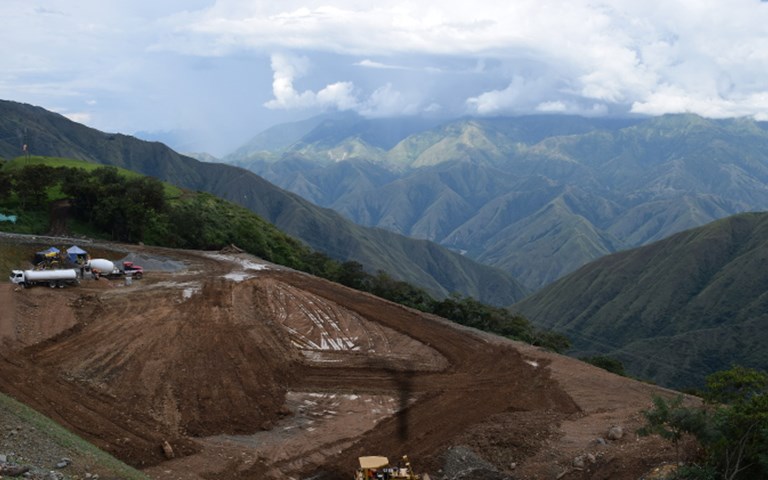 The top of the deposit is at around 1,700 metres above sea level, with the plant site roughly 600 metres below in the Higabra Valley.

There is plenty of gold in the green mountains of Colombia. That is not in doubt – mining activity has been traced back to before the arrival of the Spanish. But decades of political turmoil, entrenched resistance movements folded in with the influence of the illicit drug trade, have kept it from advancing beyond its place as the next great destination for major investment in gold projects.

Continental Gold stands a good chance of changing that with its Buriticá project on the Cauca Gold Belt in Colombia’s Antioquia province. In 2011, the company released the maiden resource estimate for Buriticá. The property, 60 kilometres north of Medellín, has two identified vein systems, the Yaraguá and Veta Sur, which at that time had a Measured and Indicated Resource of 630,000 ounces of gold based on 1.1 million tonnes with an average grade of 17.8 grams per tonne. Continental’s stake in Colombia includes land around the Buriticá project as well as the Berlin mine, located further north of Medellín, which was operated by a Canadian company that extracted nearly half a million ounces between 1930 and 1946.

The company has since succeeded in turning that early estimate into a project that, based on a March 2016 feasibility study by JDS Mining and Energy, is expected to produce nearly 3.5 million ounces of gold and 6.4 million ounces of silver over a 14-year mine life. The results were impressive enough to get the interest of Newmont Mining, who gave Continental a solid vote of confidence with a US$109-million investment last May. By late October, major earthworks for the plant site were underway in preparation for the first concrete to be poured early in the New Year.

Related: B2Gold is off to a fast start at its Fekola mine in Mali

The progress at Buriticá, however, is bound up in that of its host country, which has struggled to end a more than 50-year armed conflict. What began as a fight organized around political ideologies splintered into a mess of competing factions, many of them sustained by the drug trade, kidnapping and illegal mining. The conflict has  killed an estimated 250,000 people, displaced seven million and left large parts of the country inaccessible. Last November, the government signed a peace deal with the FARC, the most prominent of the resistance groups, which has since demobilized over 7,000 militia members.

The small hill-top town of Buriticá was tangled up in the conflict. The gold bearing veins nearby made it a hub of mining activity that helped fuel the illegal economy. One part of the larger effort to bring stability across the country has been to force illegal miners out. Though the process has been fitful – six security guards working for Continental died in July in a confrontation with trespassing miners – the area, which once swelled to twice its normal population of 7,000, is more like its quiet, former self. Since 2014, Continental has been working with miners who have roots in the area to formalize artisanal operations next to the Buriticá project. Currently the mine has a 30-tonne-per-day plant with which it can process the ore it purchases from the artisanal miners. The formalization process was helped along by a government program to end illegal mining across the country in the spring of 2016. “That got us over a major hurdle,” said Continental CEO Ari Sussman. “Illegal mining is never going to be 100 per cent gone.” More than 200 mining tunnels have been found and closed off, some repeatedly. But, said Sussman, “now we are dealing with a significantly reduced amount of illegal miners. There is a permanent security plan in place on a 24-hour basis by all three pillars of Colombian government.”

If progress within Colombia has given a boost to Continental, so too has the slowdown in mine development. The company has built a deep bench of experienced talent working on the project. Donald Gray, who has extensive experience in Latin America, took on the role of COO in 2015 after bringing the Escobal silver mine to production as vice-president of operations for Tahoe Resources. He was joined earlier this year by Jon Graham, who became Continental’s vice-president of operations after three years as operations manager at Goldcorp’s Cerro Negro operation in Argentina and Tim Barnett, Buriticá’s project manager, fresh from the start-up of OceanaGold’s Haile mine in South Carolina. “Mines are complicated projects to build, so the more experience you can have, the better,” said Sussman. “The team we were able to assemble was one of the benefits of the bear market. And it’s a great project.”

Related : OceanaGold writes the latest chapter in the long history of South Carolina’s Haile mine

Gray has also found that the timing of the project worked to Continental’s advantage. “When we started with procurement earlier this year, we saw both excellent delivery times and very competitive pricing. With time, we’re seeing delivery times tending to lengthen, but pricing has remained competitive,” he said. “We made the conscious decision to finalize purchase orders as early as possible, because we saw the potential for this longer lead-time trend.” Sandvik is providing the loaders, trucks, jumbos and bolters for the underground operation and is now working with Continental to train operators on site.

In putting the leadership together, the company has also been careful to include Colombians in upper management and on the board of directors. Continental’s president Mateo Restrepo is a Medellín native and the public face of the company in Colombia, and Leon Teicher, the company chairman, a dual Canadian-Colombian citizen and past-president and CEO of Cerrejon Coal, is one of three Colombians on the board of directors. It is a model that Sussman suggested would save many headaches for Canadian mining companies operating abroad. “When a foreign company comes into Canada and needs government support everyone gets their back up. Why should we expect it to be different in a developing country where they are not as used to having the same level of foreign investment?”

Gray noted that since the feasibility study, the mining team has optimized the design to limit the amount of pre-production development. “We adjusted the layout to allow our ventilation raises, ore passes and waste passes to be constructed much earlier, which takes pressure off some ramp development.” They have done similar work on the plant design to reduce the amount of earthworks required by shrinking the footprint of the plant. A six-kilometre road now connects the plant site to the existing transportation network.

The operation will mine two deposits, which are described in the feasibility study as part of “a porphyry related epithermal carbonate base metal gold narrow vein breccia system.” The majority of these two swarms of veins will be mined using the longhole open stoping method, with some cut and fill and shrinkage mining.

Production, set for 2020, will begin at 2,100 tonnes per day (tpd) and then increase by the third year to 3,000 tpd for the remaining 12 years. Moving the ore, waste and water will be made easier with the help of gravity because much of the reserve lies in the hillside above a valley where a tunnel – already developed – will be used to truck ore to the processing plant on the valley floor. Crushed and ground ore will go through gravity concentration, cyanide leaching and counter-current decantation, and the gold and silver will then be removed from the solution using the Merrill-Crowe process before being refined into doré bars. Continental expects to recover 94 per cent of the gold and 60 per cent of the silver processed to produce 282,000 ounces of gold and 494,000 ounces of silver annually over the first five years.

About half the tailings will be dewatered and stacked in the valley with the other half delivered to a paste plant and then hoisted back up the hill on a Doppelmayr aerial tramway. 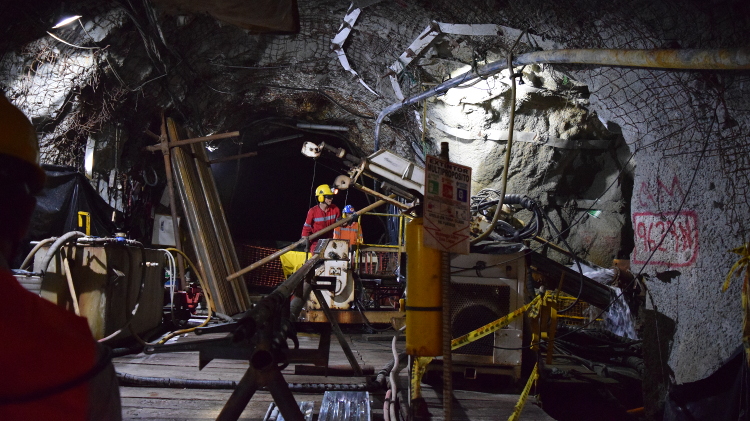 Continental is planning an extensive drilling campaign at the project in 2018. Ryan Bergen

The mine will need 900 workers once it begins producing, so the company has also been active in workforce training, partnering with a government vocational training program to set up a trade school in the town of Buriticá. One course covers basic mining skills and hazard recognition and the second is focused on basic construction skills. “The other thing we’re doing is integrating this curriculum with our equipment training, for example training on loaders and trucks,” said Gray. They are also working with Sandvik on a training program located at the project site itself that Gray said has shown very encouraging results. “We are very confident that our workforce will achieve the competency level we need for development and operations.”

For 2018, Sussman said that, in addition to the ongoing development of the mine, they plan to have a 100,000-metre drilling campaign on the Buriticá property. The two deposits that make up the current reserve and are open at depth and along the strike will be the focus of 60,000 of those metres, with the remaining drilling targeting other prospects on the property. “We are eager to see just how many ounces of gold and silver we can discover in our intrusion-based gold system,” he explained to a group of analysts and investors visiting the Buriticá project in October. “We need to create as much value as possible.”