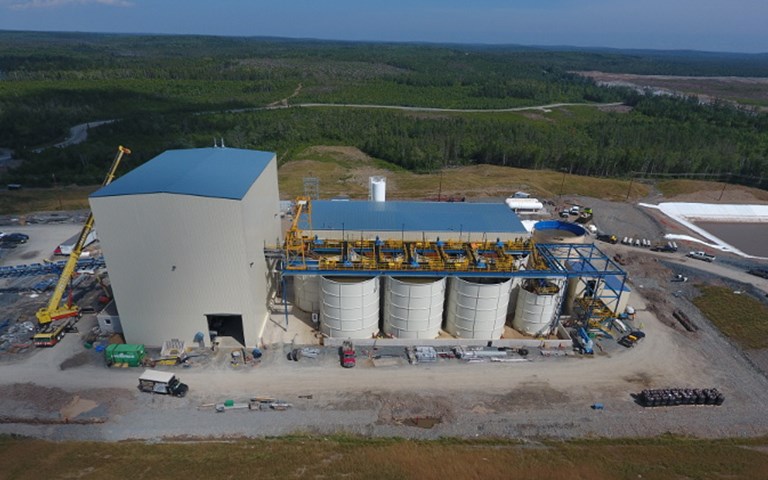 The processing facility at the Touquoy site. Courtesy of Atlantic Gold

Maryse Bélanger is proud of her new company’s first project: the $137.3-million Moose River Consolidated project in Nova Scotia, scheduled to start producing gold in October. “It’s small, but it’s well-done and well-designed,” said Bélanger, the COO of Atlantic Gold since July 2016. “You can tell I’m quite passionate about my place here.”

Moose River is starting off small, with what the company calls its “phase one” with current Proven and Probable Mineral Reserves of 425,000 ounces based on 9.2 million tonnes (Mt) at an average grade of 1.44 grams per tonne (g/t) at its Touquoy project and another 335,000 ounces from 7.25 Mt at 1.44 g/t at nearby Beaver Dam.

Moose River has a long history. A provincial survey in 1861 led to a Nova Scotia gold rush and the designation of a total of 65 gold mining districts by the early 1900s, including Sherbrooke, Seal Harbour, and Tangier. Nova Scotia – specifically, the Cambrian greywacke and overlying slate of its southern Meguma Group – became known for gold-bearing quartz veins, often high-grade and accessed by underground workings. Moose River Gold Mines produced about 21,500 ounces from 1877 to the First World War.

By the mid-20th century there was little mining activity in the province. But over the 1980s and 1990s, a series of companies explored the possibility of open-pit mining at the Touquoy deposit, where there was medium-grade but non-refractory gold disseminated in argillite. Atlantic Gold got involved during the booming early 2000s. In addition to Touquoy and Beaver Dam, the company is exploring two other deposits, Cochrane Hill and Fifteen Mile Stream – altogether, an investment it describes as a “string of pearls.”

At the moment Touquoy stands alone as the only producing gold mine in the province and will directly employ up to 215 people by this fall.

In an unusual move, Atlantic Gold signed a fixed-price EPC contract with Ausenco. The first such contract for a gold processing facility, it lowers the risk of cost overruns by guaranteeing they will not hit the mining company. The contractor benefits by being able to offer a predictable cost and having strong incentives to work efficiently. It does require significant upfront work for both parties, which Bélanger said she thinks is one reason it is overlooked as a strategy. “Everyone has to bring clarity,” she said. “On the client’s side, what you want; on the contractor’s side, how much things will cost.” Detailed engineering work must include precise equipment selection, down to pump model and size, and firm quotes must be secured from suppliers.

But from her point of view, the work was worth it. “For us it’s been a really good experience,” she said. “As the client, we are on schedule and on budget.”

The construction process has not passed entirely without annoyances. Bélanger shared a bit of wisdom she learned the hard way: “Don’t try to build the clay core for a tailings dam in the winter.” When frozen lenses develop in the clay, the material has to be discarded; in a Nova Scotia winter, the safe temperature window for working with clay lasts about two hours at midday.

In many ways the project is a conventional open-pit mine and process plant. The Touquoy deposit will be mined using leased equipment, and when it is depleted in year five mining activities will switch to the Beaver Dam deposit. All ore will be processed at the Touquoy process plant, which is designed for a throughput of 250 tonnes per hour. The plant relies on standard milling methods: a three-stage crushing circuit, followed by a ball mill, a gravity concentrator, a carbon-in-leach circuit and a smelter that will produce doré bars. In its phase one scenario, the site will produce an annual average of approximately 87,000 ounces over at least eight and a half years at an all-in sustaining cost of $690 per ounce and a gold recovery rate of 94 per cent.

But Bélanger is pleased with the details that Ausenco worked into the process plant. “As a group, we’re really proud of the smart engineering that’s been incorporated in the design,” she said. In addition to her past work at Mirabela Nickel, Goldcorp and Kinross Gold, Bélanger was once a director of the Coalition for Eco-Efficient Comminution and she was drawn to Atlantic by, among other things, the opportunity to implement mine-to-mill practices with a focus on energy. 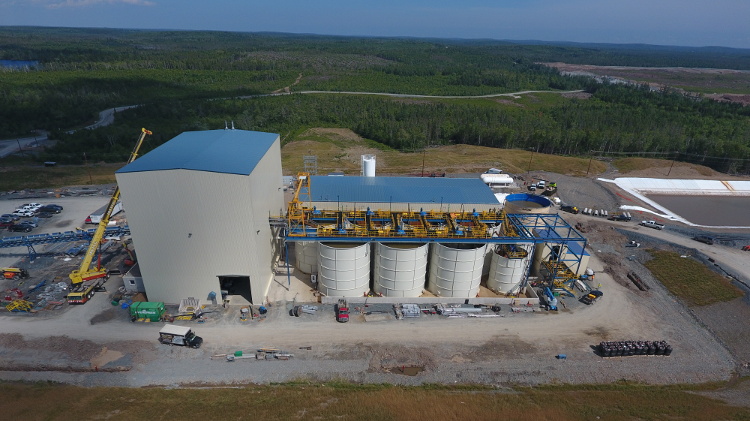 The process plant, adjacent to the Touquoy pit, is designed for 250 tonnes per hour. Courtesy of Atlantic Gold

The mill building was given a height of 45 metres to accommodate large equipment, but the rest of the plant has a lower profile to save on heating, ventilation and air conditioning costs. The Moose River project will also apply blast optimization practices. “More and more people are focused on this approach,” said Bélanger, “because we know that it’s in some instances 30 times cheaper to break the material in the mine than it is in the plant.”

The seven leach tanks were fabricated for Atlantic Gold by a company called Modular Fabrication in nearby Miramichi, New Brunswick. “Instead of taking three to four weeks to install them, it took about four or five days,” she said, “because it was all pre-fabricated and they just needed to be snapped on and filled.” Having the manufacturer nearby made quality control visits easier as well.

The same approach was used for the crushing circuit, which was designed by Metso but fabricated in Miramichi. This not only cut installation time down to a month but will also make it possible to move primary crushing equipment to the Beaver Dam site when Touquoy is depleted. The jaw crusher and grizzly feeder will be relocated to Beaver Dam; the ore will then be trucked 37 kilometres to the Touquoy mill for secondary crushing.

As part of its drive to reduce energy use, Atlantic is looking at installing automated process control in its mill. The ball mill will have  a variable-speed drive, and early evaluation suggests that the mine could derive significant savings by installing a system that would tailor the drive’s speed to specific ore characteristics detected by sophisticated sensors. The site metallurgical team will refine the control system over time as lessons emerge about the impacts of varying ore quality and quantity. The system will also have maintenance benefits – detecting stuck ball charge, reducing damage to the site grid from voltage irregularities and reducing liner wear.

In production, this could help keep milling on spec, avoid over-grinding, and reduce the project’s energy use. The ball mill’s annual power draw is 13,882 MWh a year, or almost half of the Touquoy plant’s total power consumption. Reducing peak energy demand is particularly important. “Peak demand is a considerable component of Nova Scotia Power’s pricing,” said Bélanger. “The utility power industrial to residential ratio  in Nova Scotia is already one of the highest in North America so improvements in this area will lead to considerable cost reduction.”

Other energy-saving plans include measurements of dissolved oxygen in the leach process, which could provide improved controls for the air blower. Although Bélanger expects that most ideas for saving energy will see implementation, Atlantic does not yet have quotes from potential suppliers of sensors and software. The big-ticket savings involved make it likely that Nova Scotia’s energy efficiency program will help pay for some of the new technology.

In the last few years, Atlantic Gold has also done some advance planning by conducting reverse circulation drilling on five-by-five- or five-by-ten-metre grids. “We drill down four benches before production,” said Bélanger. “It allows us to get some very high-density information before we mine, so it lets us adjust our short-range model and leads to better mine planning, because we better define ore-waste segregation. Right now we have 14 months drilled off, and we see really good correlation with our resource block model.” 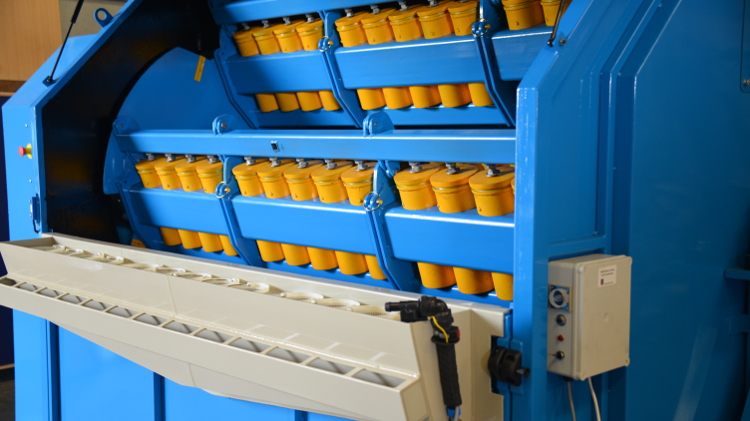 The operation includes a pulverize and leach machine that will be used for mine planning and reconciliation. Courtesy of John Cooper/Mineral Process Control

This is called grade control drilling or production density drilling; it is used widely in Australia and West Africa but is unique in Canada, where operations typically assay blastholes to prepare a short-range planning model, explained Bélanger. “From our perspective, that’s very last-minute. Depending on the driller, on the machine, it’s difficult to get in operation.” Moreover, said Bélanger, the size of the samples collected is not adequate for disseminated mineralization. She noted Atlantic is the only miner in North America with a PAL (pulverize and leach) machine that assays samples of up to one kilogram. “We have worked hard to finesse and perfect sampling and splitting protocols to maximize sample precision in the rock type prior to the pressures of mining and production.”

Another benefit, explained Bélanger is that “the grade control drilling also provides a reconciliation tool of the tonnes and grade in the mining blocks using high density data. Short of actually mining those blocks this is the closest thing to predicting the actual tonnes and grade.”

For Bélanger, who spent many years working for larger miners, it was novel to work with a small company to build out a team. “Not a lot of people have the opportunity to do that from scratch, and I can tell you, it is a wonderful experience,” she said.

Seven corporate staff in Vancouver are overseeing two mines and a single processing facility in Nova Scotia. Given the sizes involved, it seemed wise to make technical skills available at site and to give people maximum decision-making freedom; because Atlantic Gold started with principles of safe performance and accountability, the company also wanted to make very straight and simple reporting lines. In practice this meant creating a workforce that is full-time and has minimal contractor support. “Everyone has to operate as an owner and it is difficult to implement with contractors,” said Bélanger.

The workforce is also 98 per cent Nova Scotian. Atlantic Gold sought to bring strong technical talent back to the province, and Bélanger said she thinks that effort has been successful. “We’ve been very fortunate to find some really great professionals,” she said. “Many of them were originally from Nova Scotia but have never worked in the province. For some of them it was a lifestyle choice: whether they would keep doing fly in/fly out, or work in the jungle, or come back home and work here, where everybody drives home at night.”

The initial promise of an eight-and-a-half-year life looks likely to extend with the properties currently under exploration. The most recent drilling campaign defined a Measured and Indicated Resource estimate of 10.6 Mt at 1.16 g/t for 398,000 ounces using a .35 g/t cut-off grade at Cochrane Hill and 10.5 Mt at 1.33 g/t for 452,000 ounces at Fifteen Mile Stream. Atlantic Gold will be completing a pre-feasibility study in the fourth quarter of 2017; mining at Cochrane Hill could start in a few years, adding value to Atlantic’s string of pearls.