Neighbourhood watchPorcupine Gold Mines' Hollinger project sits next to Timmins, Ontario and under the microscope

Porcupine Gold Mines' Hollinger project sits next to Timmins, Ontario and under the microscope
By Christopher Pollon
August 21, 2015 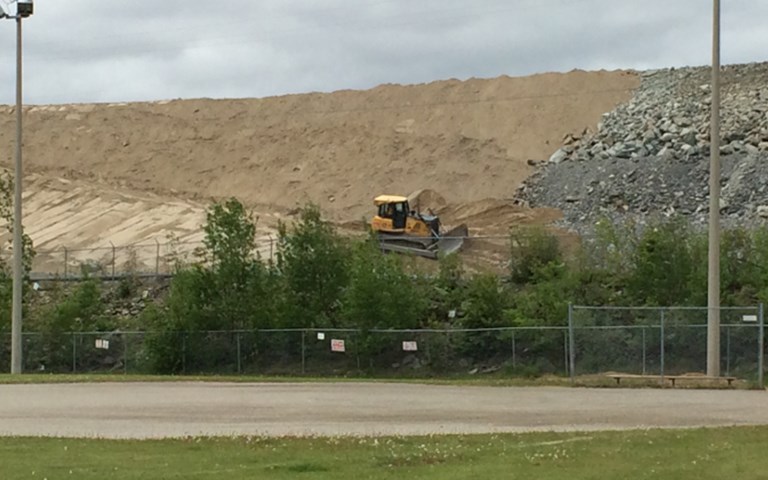 A rock and earthen berm is the centrepiece of the company’s efforts to limit the impact of the mining operations on the residents of Timmins. Courtesy of Porcupine Gold Mines

By the time Goldcorp Porcupine Gold Mines (PGM) took over the former site of the past-producing Hollinger mine (as part of a land package acquired by Goldcorp in 2007 from Kinross and Placer Dome), it had been fenced off and abandoned since the late 1980s. The 100-hectare area was pockmarked with surface micro pits and sink holes connected to 600 kilometres of abandoned shafts, drifts and cross-cuts, all the legacy of Hollinger mining operations that began in 1910 and eventually produced about 20 million ounces of gold.

After years of technical studies, PGM (a joint venture between Goldcorp Canada Ltd. and Goldcorp Inc.) estimated that the old Hollinger site still holds reserves of about 528,000 ounces that could be accessed via open pit. There was just one problem: when the first Hollinger mine was built, it was at the epicentre of a black-fly infested patch of bush known as the Porcupine camp. Over the years, the city of Timmins, which grew up from its earliest days around this very stretch of Precambrian rock, had developed into a city of 45,000 people. Mining the site now would mean blasting and mining an open pit directly adjacent to the downtown core.

The proximity of the mine to the downtown has shaped the new Hollinger project from the outset, said PGM’s open pit superintendant, Darren Fasciano, who likens the mine to a huge, urban rock quarry. “We are scaling down our drilling, blasting and a lot of other activities to accommodate being so close,” he said.

On the day Fasciano spoke to CIM Magazine PGM had already completed 5.26 million tonnes of pre-stripping since construction commenced in February 2014.

The company had released a best management plan long before the first blast occurred. The plan, published in the fall of 2012, outlined how the site would be mined and how impacts would be minimized. A centrepiece of the plan was to surround the mine with a rock berm to control the noise, dust, air overpressure and vibrations from operations in the pit.

As of late June, more than four million tonnes of the total pre-strip material has been used to construct the berm. Over the last year a little less than 500,000 tonnes of ore has been trucked to a mill at PGM’s nearby Dome mine as well, allowing the company to commence limited gold production while still in the construction phase. Sections of the wall, ranging in height from 10 to 25 metres and a total of 3.6 kilometres in length, are completed, and the exterior slope is being topped with overburden to eventually be seeded with vegetation. “It will look like a green hill from the city side,” said Brendan Zuidema, general manager of the mine.

Situated just blocks from the city library and directly behind a Comfort Inn, the mine’s location means the ­day-to-day operations of the project, especially blasting, have been well honed. In the preliminary planning stages, the company used modelling to determine the permissible size of blasts to limit both vibration and air pollution from dust and explosive emissions. Blasting can only happen during two “windows” each day in the late morning and mid-afternoon, so that Timmins residents and businesses can work around a predictable schedule. During each of these daily blasting windows, no more than 30,000 tonnes of rock can be moved by blasting, with a limit of 9,000 kilograms of explosives.

Mine construction currently takes place between 7 a.m. and 7 p.m. daily, while the berm is still in construction. Once the berm is complete and PGM’s “noise modelling” is validated this August, the production phase of the mine will begin on a continuous 24/7 schedule. Blasting will still be restricted to the day shift, however. All the ore will be crushed and milled at the nearby Dome processing facility.

Compared to its past-producing Pamour open pit a few kilometres northwest of town, which would have used 6.5-inch holes for blasting, here it is limited to drilling 4.0- to 4.5-inch holes to set up smaller explosions. “That creates a lot of challenges,” said Zuidema, meaning the company has tripled the number of holes it drills with less room to manoeuvre, loading explosives in closer-than-traditional proximity. To control emissions and maximize safety, it has also adopted the ­cutting-edge gas explosive Titan SME 1000 – a site-mixed emulsion product from Dyno Nobel – which only becomes explosive when all the ingredients are combined in a hose at the site.

Blasting during the construction phase has not been without incident. Last summer, fly rock escaped the site after an explosion and damaged a vehicle in the staff parking lot (no one was injured). A follow-up investigation resulted in changes to blast sign-off protocols and increased scrutiny of the blast matting process and of “pioneering blasts” – the first blasts to level the ground after the removal of overburden exposes the rock, which at this site occurs on uneven ground.

The company maintains it is not taking any more chances. “We’re the biggest consumer of blast mats in probably all of Canada,” said Zuidema, noting that matting each blast adds to the complexity of the work. Two dedicated handlers place two to four layers of mats over every blast (there are 1,400 mats on site at this time), which must then be removed once the blast is completed. The entire process can take two to three days.

Trucks and other heavy equipment are expected to be among the loudest aspects of the operation once 24/7 ­operations begin. The Ontario government has mandated the company to limit noise outside of the berm to 50 decibels (db) during the day shift – equivalent to moderate rainfall, according to PGM’s best management plan – and 45 db at night, or a “refrigerator humming.” To help achieve this, haul trucks will use sound-dampening panels installed around engine compartments, corrugated aluminum, foam–filled “louvres” on the front of the trucks and quieter aftermarket mufflers. Water trucks will be a constant presence on the site to control dust, which will also be suppressed through the use of calcium chloride and an environmentally benign product called DusTreat, manufactured by GE.

Perhaps the most novel feature of the project will be its live monitoring system, which measures noise, dust and vibration from 17 separate stations positioned around the berm periphery. The system was created to help the company measure impacts for internal use and ensure that levels remained below the regulatory limits, but it soon evolved into something more. “We realized that we could share the data being generated by the monitoring system with the general public,” said PGM’s communications coordinator, Patricia Buttineau. “We decided this would be a great way of ensuring our transparency with the community and we had buy-in from all levels of [PGM] and Goldcorp.”

The requirements for the monitoring system were so particular that the company hired to provide it – Danish environmental engineering firm Brüel & Kjær – had to develop much of it from scratch. Monitoring systems to date are often designed to measure noise levels around airports, but the contractor was tasked with enabling the measurement of dust and vibration as well, all in a single system. “I don’t think there’s any other operation that has the three elements in the monitoring system,” said Fasciano.

There is no underestimating the public relations challenge of building and operating an open pit in a city, even in a single-industry town like Timmins that has grown up around mining. To address concerns that the project will damage government and private property outside the berm over time, PGM has been proactive in getting baseline structure building data for some of the buildings close to the mine, and has established a protocol to address potential concerns. Anyone who feels that mine operations have damaged their property can file a claim with PGM’s community liaison coordinator. PGM employees will conduct an initial investigation and, if necessary, a third-party engineer, retained by PGM, will perform a separate inspection and ultimately rule on the cause of the damage and the potential recourse. Since March 2013 the company has received 29 claims of suspected property damage; nine of these claims have resulted in compensation to the property owner, and as of early July, two remained under investigation.

In designing a lower-impact operation, PGM has looked to emulate other mines in the world. Newmont’s Martha mine in New Zealand, which has operated next to a town since 1987, inspired the creation of a Hollinger Community Advisory Committee, made up of local community members. “It’s a sounding board between the community and the company,” said Buttineau. “If someone is, for whatever reason, not comfortable coming to the company with a concern, they can approach any member on the committee.”

PGM also examined the Canadian Malartic mine across the border in Quebec, where in July 2008 Osisko Mining relocated about 150 homes to a new neighbourhood to make way for the mine. Like at Hollinger, the company built a berm to separate the mine from the remaining built environment, uses extensive matting for blasts, and has hosted many public open house sessions to inform the public on developments.

The Malartic experience has also guided how reclamation will proceed at the end of Hollinger’s eight-year mine life. “It’s one thing to mine it, it’s another to close the thing,” said Zuidema. “We’re doing a lot of work and drawing from their experiences.”

The wider reclamation plan at Hollinger is to one day convert the 250-acre mine site into a city-owned, public-access amenity that could include hiking trails, campground facilities and a single, extremely deep lake.

Buttineau said reclamation will be progressive, beginning with the seeding of the berm. A trail system built around the outside perimeter of the berm will follow. Upon closure of the mine, trails will eventually run up and down the sides of the berm, which will be re-sloped in places for better access. And finally, most of the pit footprint will be flooded to create a lake roughly 800 metres by 500 metres in size – reaching depths of 120 metres as water is allowed to slowly collect in the pit. The company’s proposed plan for the site is due at the end of this year.

“Our hope is to return land to the city,” said Buttineau of their land use plan that is still being finalized. “It will become the crown jewel in the centre of the city of Timmins.”