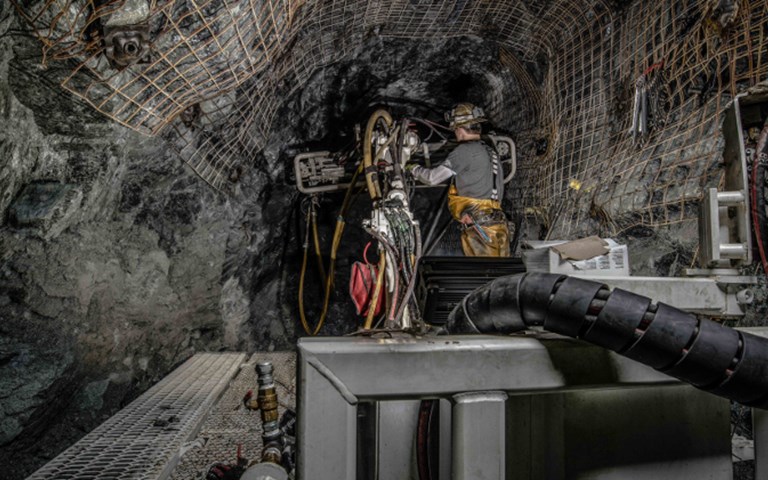 Jackleg drills have been used without any significant changes to their design to drill blast holes and place supports in underground mines since the modern industrial revolution began almost a century ago. These cumbersome handheld rotary percussion drills are involved in more ground fall accidents in underground metal mines than any other drill in the United States, but are difficult to replace; few tools function so well on uneven ground in narrow-vein mining.

Quebec-based mining contractor and manufacturer CMAC-Thyssen Mining Group began designing a hydraulic drill handling system (DHS) to breathe new life into the jackleg drill about four years ago to make it safer to use and easier on operators. As both a mining contractor and equipment manufacturer, CMAC-Thyssen understood the problems with the traditional jackleg drill from both a user and designer perspective. The solution the company developed borrowed an idea from the construction sector, which makes use of a hydraulic positioning arm to chip concrete.

In early 2013, CMAC-Thyssen joined forces with RNP, the construction company that designed and built the concrete-chipping drill, to redesign the jackleg drill for modern mining operations where safety is a top priority.

“It went relatively smoothly: everything was in place to get the product right,” explained Guillaume Julien, CMAC-Thyssen’s technical director, who is responsible for research and development. “It took about a year from the early meetings with RNP to the final tests.”

CMAC-Thyssen quickly installed the initial prototype underground at Agnico Eagle’s LaRonde mine – which was already one of its customers – for a series of tests in October 2014, making improvements to the product before presenting the DHS to new customers. After a conversation with CMAC-Thyssen president Rene Scheepers about the new technology, Stillwater Mining Company’s David Swisher agreed to test the improved DHS prototype at the East Boulder mine he has managed since January 2016. The East Boulder operation is a large underground operation, one of two mines in Montana to exploit the narrow veins of platinum and palladium in the J-M Reef.

Swisher was looking for a solution to make jackleg drills safer for workers at the East Boulder and nearby Stillwater mines, where the cut and fill method is employed to chase the narrow, irregular orebody. Like all cut and fill operations, after drilling, blasting and removing material, workers move in to bolt the walls.

“Bolting requires the use of jackleg drills,” said Swisher. “Individual drills are used by individual people and it can be very labour-intensive. Over a lengthy period, they can wear a person out.”

A recent analysis of jackleg drill-related injuries published in the Mining Engineering Journal found that around 20 per cent of injuries are due to overexertion. The heavy weight of the drill and base, awkward positioning in tight spaces, working on uneven surfaces and vibration of the equipment can lead to musculoskeletal disorders.

CMAC-Thyssen’s approach was to dramatically reduce the manual handling of the drill. Rather than muscling the drill into place, CMAC-Thyssen designed the new DHS with a hydraulic boom to control the movement and position the pneumatic drill arm. Operators still have control but the drill is much easier to position using a double-axel “zero-gravity” pivot to fine-tune the position of the drill, rather than strength.

“We call it ‘zero-gravity’ because the feet and the drill are balanced in a way that reduces the physical effort to a minimum,” Julien said, “The pivots are positioned so you can turn the whole base and drill to any position without struggling.” Furthermore, operators work from a level platform, rather than unconsolidated, rocky ground, and are out of the direct path of loose rock during bolting.

It is important to note that the new DHS is not a fully automated system, said Julien. There are other bolt drills that are fully automatic and operate remotely via screens and joysticks, but CMAC-Thyssen purposely created a tool that was easy to operate and required only a brief period of training to learn how to operate it. “Basically, if a miner knows how to drill with a jackleg, he or she will get this machine in about an hour,” said Julien.

When CMAC-Thyssen provided the first DHS prototype unit to Stillwater Mining in 2016, Swisher was quick to pass it directly to the operators underground at East Boulder. “The best way to truly understand how a piece of equipment is going to work at any operation is to put it into the hands of the people who are going to use it day-in and day-out,” said Swisher.

“Our safety department went through a job hazard analysis and identified any potential hazards associated with operating the new piece of equipment and what they found is that the DHS posed a lot less risk to our employees than the jackleg drills,” said Swisher, “The number one reason we made the switch to the DHS system was to enhance the safety and reduce the risk to our people.”

Over the following months, the operators suggested several modifications, which were communicated to CMAC-Thyssen for future iterations, such as increasing the reach of the boom and the range of movement of the drill without having to move the base. “The platform stays stationary but the boom slides forward three feet and that allows enough room to finish bolting a round,” Swisher said.

Together, the teams made further modifications to the base due to the small size of the drift. Julien and the CMAC-Thyssen engineering team designed another, smaller platform on skids, and added a rail around the base. After spending several months modifying the DHS, Stillwater Mining has now purchased ten DHS units for use underground at the Stillwater and East Boulder mines and hope to replace all the jacklegs on each site with newer models by the end of 2017. A basic unit on a platform costs $70,000.

“Our employees were very good at operating jacklegs safely but what the new DHS does is reduce potential risks while being innovative and intuitive,” said Swisher.

Another seven DHS units are in use at TMAC Resources’ Hope Bay high-grade gold project in Nunavut and CMAC-Thyssen has sent prototype units to sites in Mexico and Morocco. As of August, CMAC-Thyssen was in the process of developing new features and making modifications to the current prototype, such as increasing the arm rotation and inclination to allow operators to drill the full range of angles around the face of the drift, and to be able to put explosives in it.

“We’ve solved a lot of the health and safety problems associated with jackleg drilling because the operator doesn’t handle the drill anymore,” said Julien. “That’s the best way to get rid of all these problems.”