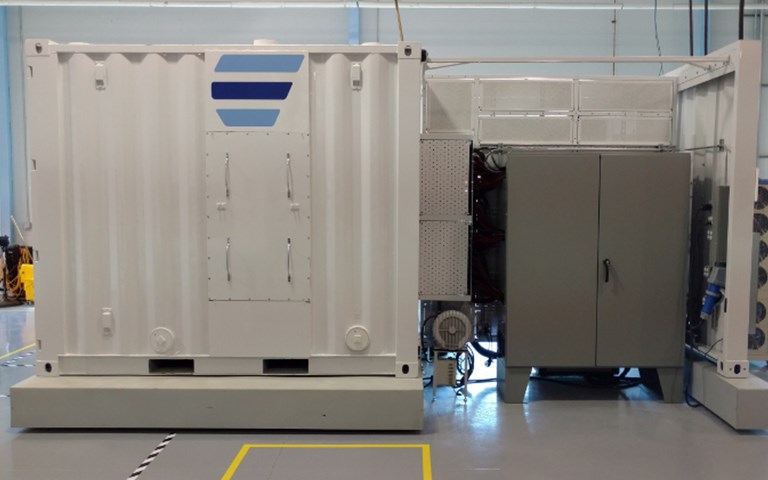 Renewable sources of electricity are enjoying rapidly increasing levels of adoption in North America as their cost has plummeted. In the U.S., 11 states generated over 15 per cent of their power from non-hydroelectric renewable sources in 2015, according to data from the U.S. Energy Information Administration. Wind energy alone accounts for 41 per cent of all new generation capacity installed since 2014.

But two hurdles loom large: intermittent generation from sources like wind and solar, and peaking power when daily electricity demand reaches its highest point. Large-scale electricity storage would solve these problems, but so far no technology has found widespread market acceptance. Donald Sadoway, the John F. Elliott Professor of Materials Chemistry at the Massachusetts Institute of Technology (MIT), explained the problem during a 2012 TED Talk. “Today,” he said, “there is simply no battery technology capable of meeting the demanding performance requirements of the grid: namely, uncommonly high power, long service lifetime and super low cost.”

So Sadoway developed one himself. By creating a battery using elements that are both abundant and widespread in the earth, he hoped to bring the cost of storing electricity down to an economically viable price point, and mute the biggest criticism facing renewable energy.

“There are really two major problem areas, and they’re both associated with the electricity on the grid,” Sadoway told CIM Magazine, speaking from his office at MIT in Cambridge, MA. “The problem that’s more obvious to people is the intermittency that accompanies renewable sources of energy.” With storage, he said, utilities could generate electricity from these sources when they are available, store it on a large scale and then release it to the grid when it is needed.

But even a conventional grid would benefit from storage capacity by making it more resilient to demand-related issues like brownouts and blackouts. Currently, utilities meet ever-increasing demand by adding peaking capacity at the power plant and performing costly upgrades to transmission lines. With storage, Sadoway said, “when the demand is low, you can ship the surplus electricity over the lines and store it close to the demand center. Then, when the demand is high, you have a combination of what’s coming through the lines, plus what you have stored in your basement or at the substation.”

If the need is so obvious and the benefits so widespread, why has no one else managed to build a battery for grid-level storage yet?

“It’s the worst mix of really high performance requirements and a really low price point,” answered Sadoway. Until now, the alternatives – mainly diesel-powered backup generators and natural gas-powered peaking units – have been cheaper than any scalable storage options. “In the U.S., something like 50 per cent of the natural gas peaking units are used less than two per cent of the time,” Sadoway said. “The rest of the time they’re sitting idle. But it’s still cheaper than any battery we’ve got right now. It’s just a really, really tough problem.”

A battery would surpass the most widely used grid-level storage solution – pumped hydroelectric storage – on price, and would be irresistible in a marketplace that could be as large as US$400 billion by 2020, according to the Boston Consulting Group. But getting there requires rethinking batteries entirely.

Sadoway’s background is in electrometallurgy, and using electricity to smelt aluminum relies on much the same knowledge of the electrochemical properties of elements as does storing energy chemically in a battery. Around 2006, he conceived of a cell that would release electricity when two metals alloyed together, sort of the reverse of what happens during smelting. And for good measure, he intended to build this battery using extremely common – and cheap – metals, rather than the more exotic ones found in cell phones and electric cars.

To allow the metals to freely alloy and dealloy, they need to be liquid. The two metals need to have high mutual reactivity – that is, the ability to gain, lose, or share electrons to undergo a chemical reaction with each other. And they also need to stay separated in two distinct electrodes – tricky, when they are liquid. But working with “extreme” electrochemical processes like this is Sadoway’s bread and butter. 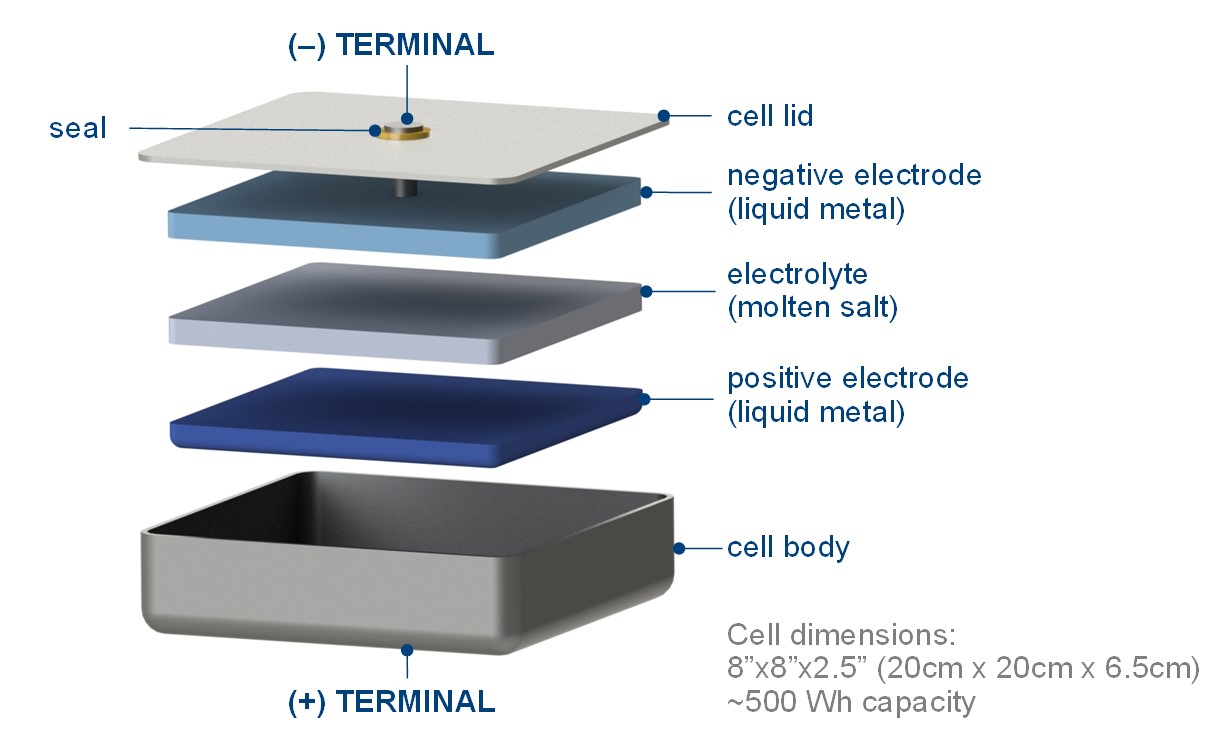 During initial experiments, Sadoway and his graduate student, David Bradwell, used magnesium as the top layer and antimony as the bottom layer. Despite early difficulties manufacturing the cells in the lab, Bradwell, Sadoway and a growing team eventually learned to make a reliable, rechargeable liquid metal battery. By 2010, the group had outgrown the labs at MIT, so Sadoway and Bradwell, who had by then finished his PhD, founded a company, Ambri, to commercialize the technology.

Six years on, Bradwell, now CTO of Ambri, said he still does not know of any other companies pursuing liquid metal batteries. Part of the reason may be that a commercial battery requires more than just operating cells on the lab bench. In particular, each liquid metal battery cell requires a high temperature seal that is hermetic, electrically insulating, and non-reactive to oxygen as well as the metal vapours and molten salt inside the cell. The company spent the last two years developing the materials and processes to manufacture their own proprietary seal in-house. This summer, Ambri overcame this challenge and in November, Ambri successfully built and began operating its first in-lab prototype system with 432 cells and seals.

To simplify things elsewhere, the company designed the battery to be easy to build. Each cell is a deep-drawn stainless steel can, into which a pre-alloyed metal puck is placed. The salt is layered on top, then the lid is welded shut. Many of these individual cells are stacked together in a larger container to make a battery. The company’s plans include bringing a modular system with nearly one megawatt hour (MWh) to market. Two of these units would fit into a transportable, stackable 20-foot shipping container. Several of these systems could be strung together to store four to eight hours’ worth of power from a typical two-megawatt (MW) wind turbine.

The liquid metal batteries have a cycle efficiency of around 80 per cent, on par with pumped hydro, said Sadoway. And the losses during the charge and discharge cycles actually help keep the electrodes of the batteries – which operate at nearly 500 C – liquid. Vitally, they also do not degrade over time, promising long service life. In Ambri’s testing, Sadoway said, the oldest batteries have completed over 3,000 charge-discharge cycles over three and a half years, with no measurable change in capacity. “They’re just not fading.”

It is this combination of long life and low cost that other modern battery technologies like lithium-ion cannot match for large-scale, price-sensitive applications like grid storage, explained Bradwell. And while the liquid metal batteries are much heavier than the equivalent lithium-ion cell, they have similar volumetric energy densities, meaning they take up no more space.

Although Ambri will not disclose the cost of its prototype systems or what it expects the market entry price to be, Bradwell is confident the fully installed cost will be competitive. “We anticipate pricing it at just a little bit less expensive than the next best alternative,” he said.

In selecting their materials – Ambri has developed a new formulation for the cell – more was at stake than just performance. “We looked at the supply chains for the various metals and salts,” said Sadoway. “If we were to go to some very high level of adoption, what would that do [to the market]? We need to be smart about this, because if a big rise in demand causes a rise in the price, then all of your work is for nothing. If the price isn’t right, you won’t get the adoption.”

For now, Ambri is focused on getting the technology, including battery and controls, into a commercially relevant, easy-to-adopt system – “A box that says ‘1 MWh’ and has a plus sign and a minus sign on it,” according to Sadoway. Ambri’s first prototype commercial system should be done by the end of 2017, according to Bradwell, with commercial deployments in 2018.

Within two or three years, Sadoway said he hopes his invention will be deployed commercially at “the highest pain points” – islands and other remote locations without access to wider grids. “Even at $1,000 per kWh [of storage], some geographies would be very happy to have batteries,” he said.

After that, he expects that achieving economies of scale will help bring down the price. “For widespread deployment, it’s got to get down below $500 per kWh,” Sadoway said. “And the lower it goes, the greater the number of applications it will be able to address.”