Efficiency and performance the ethos at latest Minexpo
By Ryan Bergen
November 04, 2016 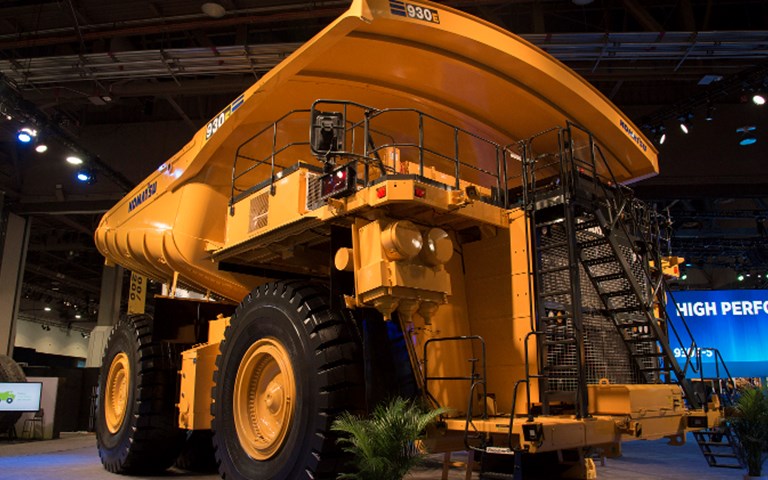 Major manufacturers showcased their big equipment at Minexpo, but Caterpillar’s resource industries president Denise Johnson noted that “not a lot of big iron is being sold” right now." Neal Young

Downturn be damned, the quadrennial Minexpo International in Las Vegas remains the destination for the mining supply and services sector to show off its latest developments. What has changed since the many companies last gathered is the direction they have taken.

While all the major manufacturers had their big equipment on hand to add shine to the tradeshow floor, Denise Johnson, resource industries president for Caterpillar, noted at a press event prior to the late-September show, “not a lot of big iron is being sold.”

Four years ago “it was all about throughput,” observed Roland Ehrl, executive vice-president for Siemens’ mineral division. “Now it is productivity, which has been low, and that has been complicated by decreasing grades. Today, the request is for improved asset health and performance. There is a move to predictive maintenance to keep the equipment running.”

Tom Bluth, Caterpillar’s vice-president of surface mining and technology, echoed that appraisal. “The R&D focus is on retrofits, how to increase operating performance of existing fleets.”

Looking to the future, the emphasis landed squarely on automation. Komatsu rolled out its purpose-built autonomous haul truck. The cabless 230-tonne hauler features four-wheel drive and steering, and is designed to be driven in either direction, thereby eliminating the need to turn to back into the load-spotting area next to the excavator.

The truck, dubbed the Innovative Autonomous Haulage Vehicle, does not yet have a market release date. Nevertheless, it stands as a monument to the surging interest in autonomous operations and robotics, a category of exhibitors at Minexpo that has doubled in size since 2012. Overall, there were 1,953 companies exhibiting across 840,000 square feet of floor space inside and outside of the Las Vegas Convention Center.

At the opening plenary, which set the framework for the three-day show, Hecla Mining CEO Phillips S. Baker Jr. observed the industry is on the verge of transformation. “We are on the cusp of changes we haven’t seen in 25 to 30 years,” he said, highlighting the converging influences of an emerging work force that has grown up with network technology and the drive to expand automation. He envisioned a near-future where “people are still working in mining, but they are going to be doing different, safer jobs.”

Fellow panellist Joy Global CEO Ted Doheny agreed the overarching focus for the industry will be greater automation as well as increasing underground operations, and reduction of the needless handling of waste rock.

For underground mining, the array of battery-powered options has continued to expand, due in large part to the savings in ventilation costs that emission-free vehicles provide. Sandvik made its entry into the electric LHD market with the launch of the LH307B, a 6.7-tonne capacity loader. The manufacturer opted to use a lithium titanate oxide (LTO) battery, which, while more expensive, Sandvik regards as the safest lithium-ion option. The battery provides two hours of operation before it must be recharged, a process which takes approximately 15 minutes and does not require the time and equipment to swap batteries. Patrick Murphy, Sandvik’s president of rock drills and technologies, said the power pack is expected to last the life of the loader, estimated to be between 20,000 and 30,000 hours.

Not content to simply supply battery packs to manufacturers such as Atlas Copco and RDH Mining Equipment, Artisan Vehicle Systems created its own lithium iron phosphate-powered LHD. According to John Gravelle, Artisan’s CFO, the 1.5-cubic-yard bucket with a three-tonne capacity is designed to compete head-to-head with the cost of operating a similar diesel-powered hauler by cutting fuel and maintenance expenses. “The days of allowing toxic diesel fumes in underground mines will soon end and will be memorialized in museums as a mining method from a primitive past,” declared the company’s CEO Mike Kasaba in the announcement of the vehicle launch.

In the more immediate future, Caterpillar’s Johnson said she expects miners will be more ready to spend on equipment. “Sustaining capex is set to increase in 2017.”

While exhibiting companies outnumbered those at the 2012 exhibition, the 44,000 registered attendees did not match the 58,000 who made the trip four years ago, when the industry had just crested its most recent peak.