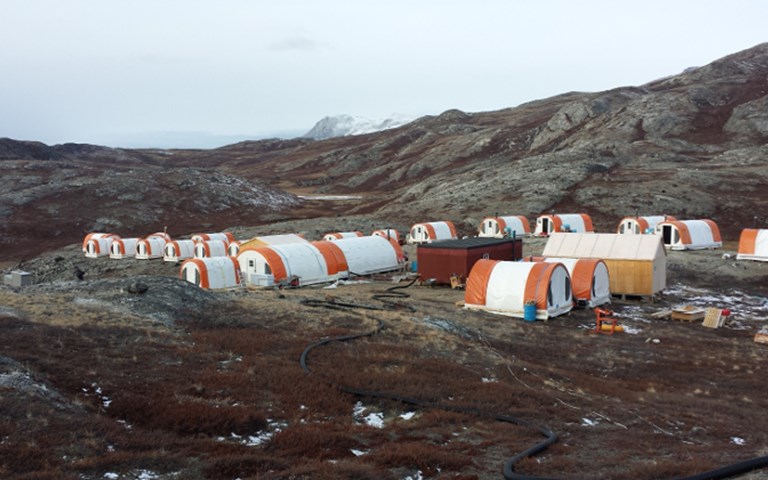 Large deposits of pure, highly calcic anorthosite have only been discovered in two places in the known universe: Hudson Resources’ White Mountain project in Greenland and the moon.

The Vancouver-based miner’s project contains high calcium, low-sodium anorthosite, an igneous rock that predominantly contains plagioclase feldspar. It began constructing an industrial mineral mine on the site in 2016, with firm plans to send the first shipment of ‘GreenSpar’ – calcium feldspar ore – to fibreglass producers around the world in early 2018.

The deposit will be mined as a quarry to exploit the calcium feldspar ore to produce E-glass fibre, a key structural element found in wind turbine blades. Other uses of the ore include replacing bauxite in alumina production, as a filler in paints or even to produce zero-CO2-emission cement. Fortunately for Hudson Resources, it does not have to exclusively focus on just one market or application because the deposit is so large; results from drilling to date show 27 million tonnes of Indicated Resources and 32 million tonnes of Inferred Resources. The only known larger anorthosite deposit is on the moon.

Hudson Resources was not targeting anorthosite when it landed in Greenland in 2002. The company staked a 96-square kilometre exploration licence in the hopes of finding diamonds after reviewing publicly available reports prepared by the Geological Survey of Denmark and Greenland (GEUS).

But in the wake of the global financial crisis of 2008, Hudson Resources shelved its plans for a diamond project and revisited the GEUS reports. A large carbonatite occurrence on the licence caught the company’s attention and it switched gears to explore for rare earth elements (REE). The carbonatite was high in neodymium and praseodymium, the REEs used to make powerful magnets. The REE market had high potential for growth at the time but developing an REE mine would have involved a major capital investment of several hundred million dollars.

“We looked out over the fjord and realized there was a large white mountain that is basically 95 per cent plagioclase: calcium feldspar,” said Tuer. “There was real, undeveloped potential, and it could be mined for a fraction of the capital cost of any other deposit in the area.”

Hudson Resources is now in the process of building a mining operation for between $30 and $40 million to crush and grind the calcium feldspar, still under the same exploration license it had originally obtained in 2002. The company is arranging a low-interest loan from a European financial institution for construction and it is in the process of raising $8-10 million in equity themselves.

The three known calcium-rich anorthosite deposits with a similar chemical composition to White Mountain are smaller, irregular and contain too many impurities for large commercial applications. The Shawmere Anorthosite Complex in northern Ontario and the Lapinlahti Deposit in Finland are much smaller deposits. The Gudvangen deposit in Norway is also quite large, but it is an underground mining operation located within a UNESCO World Heritage site with only portions of the deposit suitable for E-glass production.

“White Mountain really is a massive deposit compared to anything else in the world,” explained Jim Cambon, vice-president of project development at Hudson Resources. “We’ve looked at a lot of different deposits over the last three to four years and staked a few of them. Nothing comes close as far as size and purity goes.”

Except for the moon. According to NASA, the white lunar highlands visible from earth on the surface of the moon are anorthosite. The White Mountain deposit is so similar in composition to the moon that Hudson Resources has provided samples to NASA for lunar research.

One ore, many uses

White Mountain is 95 per cent plagioclase, which contains silica (50 per cent), aluminum (31 per cent), calcium (15 per cent) and a little sodium (two per cent). In late 2012, Hudson Resources began approaching fibreglass companies around the world to consider White Mountain’s ore and its products. The anorthosite, Tuer explained, contains low sodium and no detrimental elements, such as metals, that would interfere with the production of the glass fibers.

Mineral processing consists of three stages of crushing and magnetic separation on site. Initial planned production is for 200,000 tonnes per year and the project has a mine life of 107 years.

Hudson Resources will produce the raw material for making E-Glass, or electrical-grade glass, now used as the structural glass fibre in high-end fibreglass for wind turbine blades, for lighter parts in cars and boats, or as a replacement for metal in storage tanks.

“The material has never been available in this quality and quantity, so we’re getting calls from people who just want to look at it, study it and see what they can do with it,” said Tuer. “We’re only limited by the possibilities, not by the resource itself.”

With further micronization, it can also be added as a functional filler to paints and polymers to make them last longer. Hudson Resources sees the E-glass industry as a growth opportunity, and, in mid-2015, signed a 10-year contract with a fibreglass producer. “This supply agreement will cover a major portion of our initial planned production of 200,000 tonnes per year,” said Tuer in a press release.

“When fibreglass producers use the anorthosite instead of kaolin, we expect them to reduce their CO2 output by 10 to 15 per cent,” explained Cambon. In addition, the pure White Mountain anorthosite has the potential to replace nepheline syenite as a filler and extender for paints and plastics to make them last longer.

The anorthosite can also be used to produce alumina particles by leaching the calcium feldspar with acid and heating it to high temperatures, replacing bauxite in aluminum production. Bauxite, by comparison, produces two tonnes of red mud for every tonne of alumina produced.

“Hudson Resources’ anorthosite mine would essentially create no waste,” said Don Hains, a professional geoscientist who prepared an independent technical report and confidential feasibility study for the White Mountain E-glass project in 2014. “In the alumina application, the valuable co-products of amorphous silica and calcium silicate (synthetic wollastonite) have a number of uses.”

“It would be a game changer for the cement industry too,” said Cambon. Cement factories burn fossil fuels to heat limestone up to 1,450 C to make Portland cement, the most common type of cement, which creates 0.9 tonnes of CO2 for every tonne of cement produced. By simply mixing the anorthosite with phosphoric acid, a zero-CO2 cement can be produced.

Back home in Greenland

In 2016, Hudson Resources completed about 75 per cent of the blasting to prepare the site for a storage warehouse, process plant, fuel farm and truck shop. A 300-foot barge will be arriving from Nova Scotia in April 2017 to act as a floating dock.

“The fact that we’re on tidewater makes a huge difference for shipping product around the world,” said Cambon. Hudson Resources plans to ship to Asia, Europe, and North America. Year-round access and proximity to shipping routes and markets are just some of the attractions of having a project located on Greenland’s west coast.

The country also has a politically stable government that is supportive of mineral exploration and development, said Tuer. Mining and exploration companies deal with a single government department that represents all of the Greenlandic people, so there are no conflicting regulations or land claim challenges.

Hudson Resources has signed Impact and Benefit Agreements with the communities near the project and developed a relationship with the local mining school in Sisimiut. The company has committed to 80 per cent local employment by the end of the third year of operation, and is aiming to start full construction this spring. If all goes to plan, the mine will be commissioned this autumn and the first shipment of sand-sized material bound for fibreglass customers will leave the site by early 2018. The mine is fully permitted for 50 years.