New ideas in material handling have the potential to cut operation costs
By Alexandra Lopez-Pacheco
June 21, 2016 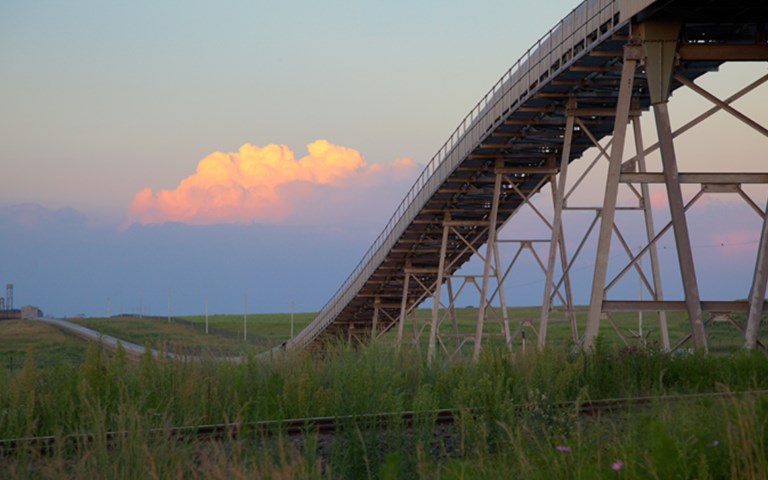 Bulk material handling technology accounts for some 25 per cent of a mining operation’s capital costs. Like the veins in an organism, this technology moves the very life source of a mining operation – its ore – from the mine to the processing plant and eventually to profits. Yet the technology has largely been taken for granted, resulting in limited innovation and performance expectations, according to Todd Swinderman, a consultant on bulk materials handling technology who worked for more than 30 years for Martin Engineering, including a seven-year stint as the company’s president and CEO.

“Customers focus more on things like the crushers, concentrators and mills in terms of specifications and performance,” he said. “We’re still essentially designing conveyors the same way they were designed in the late 1800s.”

Still, over the last 15 years, electrically-powered conveyor belts have become wider, reaching 96 inches or more. They are stronger and faster and can reliably convey about 16,000 tonnes per hour and 1,000 feet per minute, said Charlie Beck, Sandvik Mining & Construction Canada’s conveyor components business line manager. Conveyor technology has also gotten smarter with high-tech monitoring systems by such companies as Sandvik and Phoenix, which offer belt monitoring and protection systems that monitor belts for such things as wear and damage to help better predict potential problems and schedule shut downs for inspection.

A 19th-century design with 21st-century speeds and capacity, however, has led to problems, said Swinderman. Belts – the most expensive replacement part of a conveyor belt that represent as much as two-thirds of the installation cost – are wearing down far earlier than their expected life. It is also causing lot of spillage and dust, which is a major health and safety issue.

“A significant portion of major accidents that occur around a conveyor occur when workers are cleaning up around it. They happen at the loading zone or the discharge area where most of your dust and spillage is generated,” said Swinderman. “Social values have changed, workers’ feelings about working in a dirty environment have changed, safety laws have changed, production has gone way up, and so what might have worked 50 years ago is no longer enough.”

Swinderman believes it is time to rethink the traditional conveyor design to prevent these problems, and so he is doing it. The area in a conveyor most associated with premature wear and tear and spillage is by the tail pulley where the belt comes to the end of its return run and turns up to receive the bulk material. He has designed a three-dimensional belt-picking idler that allows loading close to the tail pulley with far less dust, spillage or fewer high-pressure points on the belt. His new transition system, which can be retrofitted on old conveyors, was installed a few months ago on a client’s site. “Their dust and spillage have declined by an average of 93 per cent,” said Swinderman.

The increased size and speeds of conveyors have also created new problems for rollers, which have traditionally been made from steel. “Historically, there were not any challenges with rollers,” said Beck. Over the years, the size and weight of rollers has grown to accommodate the faster speeds and larger capacity, making replacing and maintaining them a higher safety risk for workers.

Many mines would like to reduce hauling
as it increases their carbon footprint,
manpower and safety risks.”

They are also noisier. “Conventional steel rollers have a seam and as it rotates that seam becomes like a flat spot on a tire. If you’re only going 10 miles an hour, you don’t hear it, but at 60 miles an hour it’s very loud,” said Beck. Efforts to make seamless rollers from lighter-weight materials such as plastics or aluminum have resulted in quieter rollers – but they are also less stable in extreme weather and have a higher rate of failure.

In March, Sandvik launched a new seamless roller, the HR185 low-weight, low-noise roller which is made from a composite material developed by the company that has the durability of steel but is between 55 per cent and 60 per cent lighter. “That’s a huge difference when you’re talking about guys having to manhandle these rollers sometimes overhead or off a walkway,” said Beck.

Quieter rollers are important today thanks to improvements in conveyors that make it possible to use them for longer distances, sometimes near residential areas. Sandvik, for example, is currently building a 21-kilometre long, curved overland conveyor, one of the world’s longest, for Sasol Mining’s new Shondoni coal mine shaft in South Africa.

There is a growing demand for longer conveyor belts because “many mines would like to reduce hauling as it increases their carbon footprint, manpower and safety risks,” said Rudi Pieterse, Sandvik Mining Systems’ vice-president of market operations, for the United States and Canada.

Haul trucks, after all, are expensive to operate. For example, Teck Resources recently estimated it cost its Elkview steelmaking coal operation in southeast British Columbia $450 an hour to operate each of the approximately 40 haul trucks at the mine. 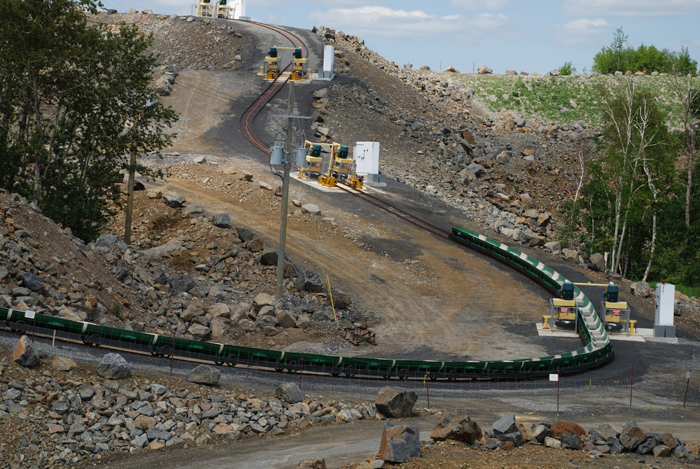 The Rail-Veyor is propelled by drive stations, the yellow structures shown above, which are spaced along the haulage route. Courtesy of Rail-Veyor

At this moment, a three-kilometre underground system using an alternative to conveyors, trucks and rail is being installed at Agnico Eagle’s Goldex mine in Val-d’Or, Quebec and will be up and running in 2017. The fully-automated electrical Rail-Veyor, which Frank Ward, vice-president of sales and marketing for Rail-Veyor Technologies Global Inc., said costs 80 to 90 per cent less to operate than a haul truck, looks like a small engineless train with continuous open rail cars and drive stations that only turn on when the Rail-Veyor is approaching to push it forward. It can travel at up to 22 kilometres per hour and has a minimum turn radius of 27 metres.

“We don’t have the emissions,” said Ward. “In underground applications the Rail-Veyor reduces the need for ventilation, so they can extend a mine deeper and not be limited by the ventilation requirements of diesel equipment.”

As well, “the Rail-Veyor doesn’t even have to be bolted down into the ground. We’ve moved 650 feet of track plus a drive station in six hours,” said Ward.

Designed to last at least 20 years with little maintenance, the Rail-Veyor can operate on incline grades up to 22 per cent. The company has also built a demo site of its system in Sudbury. First developed in 1999, the Rail-Veyor “is now a mature product ready for the world,” said Ward. 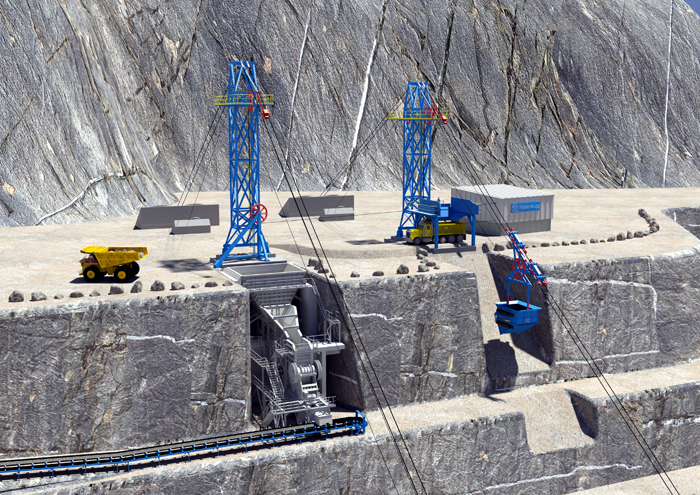 Thyssenkrupp’s Skip Way System is designed to hoist ore up the pit wall and limit the need for long trips by haul trucks and road maintenance such routes require. Courtesy of Thyssenkrupp

When it comes to steep inclines in open pit mines, there have been no viable options other than building roads up the terraces and using haul trucks. But that is changing.

“Our research and development group and sales department are working on three types of open pit conveying systems,” said Franz Wolpers, Thyssenkrupp Industrial SolutionsAG executive vice-president and head of materials handling and R&D mining world. In fact, the company is aiming for once-unimaginable heights in conveying by choosing the most direct – and shortest – route.

45-degree slope with up to 5,000 t/h capacity. The second is a system for open pit mines based on the kind of cable crane technology used in building large dams. Instead of conveyor belts or light rail, Thyssenkrupp’s Skip Way System uses counterbalanced skips that travel up and down cables in tandem over inclines as steep as 60 degrees. The Skip Way System can transport, via a lift, 350 to 2,000 tonnes of uncrushed material per hour from the bottom of the mine up 100 to 300 metres to a station at the top, where the skips are automatically unloaded into a crusher hopper or haul trucks. “Over a full working day, the skip conveying system with an hourly conveying capacity of 2,000 t/h gives a carbon dioxide reduction of 29,000 kilograms compared to a truck fleet of seven trucks with approximately 136-tonne payload each used also for the haulage of 2,000 t/h,” said Wolpers, adding “The system can be operated even under very rough weather conditions and can be employed in earthquake-prone regions or mines with unstable slopes because the rope support masts are located off the mine slope and are anchored flexibly in ground foundations using pins. The entire system including loading, unloading and drive station can also be relocated as soon as new anchorage points have been concreted in the mine.”

For even steeper slopes, the company is also working on developing a counterbalanced Skip Conveyor System which will also use cables but in this case to pull the skips up and down a rail track system as they transport between 3,000 and 5,000 tonnes of uncrushed material per hour up 200 to 700 metres, over inclines between 55 degrees and 90 degrees.

These innovations may have been a long time coming, but it might just be that a new era in bulk material handling in the mining industry has begun.