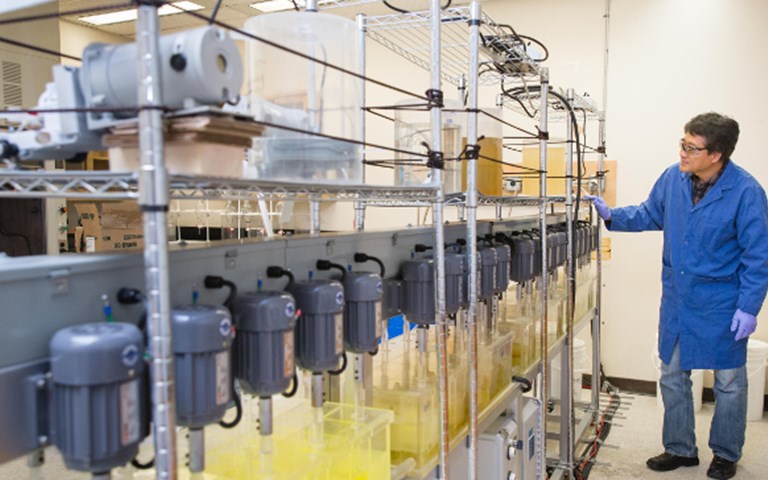 For the last three years, the Saskatchewan Research Council (SRC) has been working on a new technology that could put the province’s uranium deposits on the map as a significant source of rare earth elements (REEs).

There is nothing rare about the use of REEs. They are used in everyday technology like cell phones and television screens, as well as specialized equipment such as X-ray machines and magnetic resonance imagery. They are also used in wind turbines and next generation rechargeable batteries and hybrid cars, as well as fighter jets, satellites and rockets.

Despite society’s reliance on REEs, there are very few companies outside of China that mine them. China produces 85 to 95 per cent of the world’s supply of REEs. For years, no one batted an eye at the risk of depending on just one world supplier until the fall of 2010 when China introduced an embargo on shipments to the U.S., Japan, and Europe. Although it lifted the embargo within ten days, then-U.S. Secretary of State Hillary Clinton declared the crisis a “wake-up call,” adding that “being so dependent on only one source, disruption could occur for natural disaster reasons or other kinds of events.”

Uranium to the rescue

Saskatchewan has the world’s richest uranium deposits. Uranium is primarily associated with REEs that have higher atomic weights (the average weight of an element, based on the weight of one hydrogen atom taken as a unit). Dubbed heavy REEs (HREEs), these elements, which include gadolinium, terbium, dysprosium, erbium and ytterbium, have superior energy and magnetic properties compared to “light” REEs (LREEs). Although also used in everyday electronics, HREEs are deemed critical for nuclear and green technologies as well as the defence and aerospace industries. The demand for HREEs is estimated to be around double the supply. About 85 per cent of the REEs found in uranium deposits are HREEs.

Once SRC had confirmed the high percentage of HREEs in uranium solvent extraction raffinate – the solution left over after uranium has been recovered at the mill – its hydrometallurgists Jack Zhang and Baodong Zhao set out to develop the needed REE recovery and separation technology. The first step was reviewing existing technology and selecting the best one for treating uranium raffinate.

SRC researchers chose the solvent extraction (SX) method for REE separation, first developed and commercialized in China in the 1980s.

Next, they had to adapt that technology to address the specific REE separation challenges posed by uranium raffinate, which contains high levels of dissolved iron and aluminum. “The concentration of these impurities may be ten times that of the rare earth concentration,” said Zhao.

With such high impurity ratios, conventional SX technologies would not be able to produce high-purity HREE products; they concluded a pre-step to reduce the impurity ratio was needed.  “We used the neutralization method to remove both iron and aluminum,” said Zhao. Their lab tests showed that about 20 per cent of aluminum and more than 99 per cent of iron can be removed with pH adjustment. In the lab, researchers were able to recover up to 90 per cent of REEs from the treated raffinate using neutralization. Then they started working on fine tuning the SX technology to separate the individual REEs.

“By the third year of our research, we were sure this would work well and it was just a matter of scaling it up,” said Zhang.

SRC’s rare earth processing plant, completed in 2017, uses a typical industrial mixer-settler system with hydrochloric acid as the scrubbing and stripping agent. It combines more than 100 extraction, scrubbing and stripping cells. Because there are so many different REEs with similar chemical properties, the process requires hundreds of stages to separate and recover each one. It is a process that begins by segregating the REEs into two groups (LREEs and HREEs), which are then put through further solvent extraction stages optimized for each element to eventually produce individual high-purity HREEs.

With two pilot plant tests, SRC validated that the technology it had developed for its plant was capable of producing individual REEs with a purity of more than 99 per cent.

With the solution for REE separation under its belt, SRC is now zeroing in on a cost-effective and efficient technology that uranium operations can use at uranium mills to produce a high-purity REE concentrate. “The high ratio between impurities and REEs in the leaching solution is a common issue for most Canadian deposits so when we develop this technology, it will be able to be used not only for REE recovery from uranium raffinate but also for REE recovery from primary deposits,” said Zhao.

Once this technology is developed and proven, a full-scale plant can be built.  REE concentrates could then be shipped to a centralized separation plant. “It is a future that will likely be a reality within a decade,” said Schreiner.

The rare earth market is projected to reach US$11 billion by 2020, according to an April 2017 report by Research and Markets. China is not just the major producer, it is also a major end-user and the defence, aerospace and renewable energy industries continue to increase their consumption of REEs. SRC’s technology has the potential to improve the security of supply for those industries and position the Canadian economy for a good piece of the REE pie. It can also provide a new revenue stream to mining companies from a product that would otherwise be lost. The benefits and potential are substantial. There is just one catch, and it is a familiar one.

“The mining industry is typically reluctant to change their proven processes so we will put a lot of effort into developing a very convincing process to persuade them to adopt it,” said Schreiner. “Over the next while, our target is to demonstrate something fairly concrete to the industry. The mining industry needs to see a well-defined and operable scenario otherwise they’re not going to take a risk.”