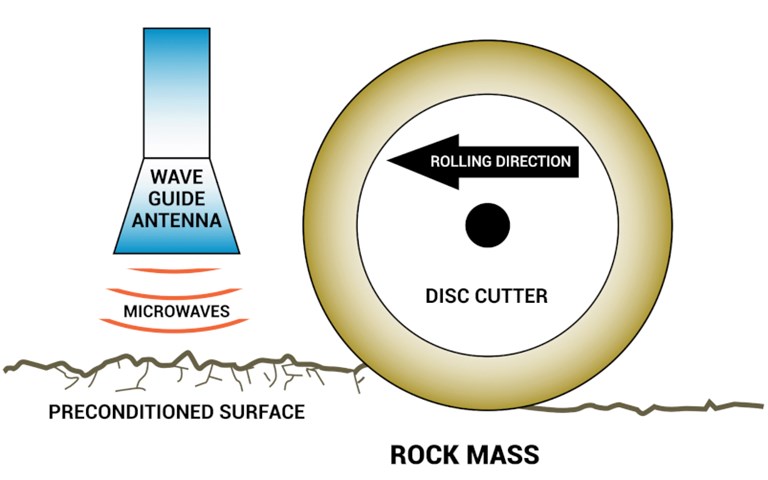 A microwave transmitter and antenna positioned on the head of the mobile miner would irradiate and precondition the surface of the rock mass prior to cutting. The intensity of power flow and electric field of microwaves (consisting of both electric and magnetic waves) generates heat, resulting physical damage to the rock surface. Courtesy of Pejman Nekoovaght

Since the late 20th century, microwave technology has been improving efficiencies in such industries as food processing, pharmaceuticals, lumber and plastics. It has even been the enabler of cell phone communication.

Mining, however, has not fully taken advantage of the microwave revolution, but that is changing.

Interest in ways to leverage the energy for mining applications such as sorting and grinding has been gaining traction. Over at CanmetMINING, a sector under Natural Resources Canada (NRCAN), researchers are working on a microwave-based technology that could supplement some drilling and blasting operations in underground mining.

A technology decades in the making

In the 1970s and 1980s, researchers set out to determine whether microwave energy could be used as an alternative to the traditional rockbreaking approach – drill, blast, muck, repeat. They developed technologies capable of breaking through rock walls using only microwaves. Doing that, however, required a lot of microwave power, resulting in significant energy costs. Instead of following up with research that looked at combining mechanical power with microwaves for a more energy-efficient approach, the concept was largely shelved – at least it was until this century, when a student turned his attention to it and began what has become an ongoing research project at CanmetMINING.

In 2007, Pejman Nekoovaght, now a principal scientist at CanmetMINING, was an engineering student researching the use of microwaves for drilling rocks in outer space. He and his research colleagues were studying how the power of microwaves could create micro-fractures in rock and envisioned adding a microwave antenna to a drill to send wavelengths through the bit into the rock to precondition it. As they conducted their research, Nekoovaght realized they were thinking too small.

“The challenge I saw was the limitation of the space to use the microwave antenna inside a small hole in the drill bit,” he said. “I suggested it would be easier to implement it on a larger scale.”

At the same time, the mining industry had started to “look into using mechanical equipment such as tunnel boring machines (TBMs) or mobile miners to replace blasting,” said Nekoovaght.

Thinking bigger led him to the idea of adding the rock preconditioning microwave technology to TBMs or, more precisely, to the machines’ disc cutters. For his thesis at McGill University, Nekoovaght studied the effects of microwaves on the properties of rocks and how to use the wavelength energy to break the rocks efficiently. Since graduating in 2015, he has continued collaborating with McGill and his area of study is now part of CanmetMINING’s deep mining initiative, which works to resolve the challenges miners face as they dig deeper for ore.

How zapping rocks cracks them

In contrast with multimode microwaves, which contain the energy in a cavity, or single mode, in which the energy remains inside the waveguide ­– a hollow metallic rectangular tube – the disc cutter technology Nekoovaght is developing will use microwaves directed through an open-ended waveguide and released into the air before hitting the surface of the rock. This will make it possible to change the angle of the waveguide, allowing the microwaves to hit the rock from ­different directions.

When the beam of microwaves hits the rock, “it agitates the particles inside the rock and that creates friction within it,” he said. “That friction generates heat, which is going to create different stress regimes due to thermal expansion within the rock.”

There are typically three different types of material with different heat-conducting qualities. Pure metals are perfect conductors that reflect the waves when zapped with microwaves. Transparent materials remain cool, simply letting the microwave energy travel through them, while material with dielectric qualities allows some energy to go through it, some to be reflected back and a significant amount of energy to be absorbed and heated. Natural rocks or minerals can behave with any of these characteristics.

“All of these differences can also work to our advantage in creating micro-fractures,” said Nekoovaght.

“The thermal conductivity in rock is extremely low so that means the heat is going to take time to travel from one point to another point. If the material in one point inside the rock is going be heated quickly and another point beside it remains cool, thermal cracking will occur due to the thermal shock phenomenon. It means a certain portion of the rock will expand its volume but in a very confined area.”

Related: A simple, logical concept could cut a mine’s energy costs by more than half

The deeper miners have to go into the ground to extract ore, the greater the costs and risks created by explosives underground become. For one, “the amount of energy required for ventilation is a key challenge. So are support and ground control issues,” said Nekoovaght.

”Blasting, which can reduce the quality of the surrounding rock mass of an opening, is dangerous and can cause unwanted movement in discontinuities as well as stress path deviation within the rock mass, resulting in micro-seismic activity.”

Miners are increasingly interested in TBM-like equipment as an alternative to blasting. TBMs can preserve the stability of the ground and hence worker safety, but can also accelerate the advancement rate in a mine, even with limited maneuverability. A drill and blast sequence typically requires about 24 hours for a four metre-advancement in a tunnel. A continuous TBM can achieve the same results in one-fifth of the time, said Nekoovaght.

But hard rock presents a problem. “Disc cutters on TBMs perform well but only up to a certain degree of strength in the rock,” said Nekoovaght.

“Above that, the wearing rate of the tools is going to greatly increase and they are going to have to replace the discs much more frequently. And then the feasibility of the whole project will be jeopardized if it adds too much cost.”

That’s where Nekoovaght’s project comes in. By having the microwave first precondition the rockwith microfractures, the effectiveness and longevity of disc cutters on hard rock are increased.

“The disc cutter follows the waveguide and it’s going to hit preconditioned rock as if it is breaking weaker rock.”

Currently, Nekoovaght is studying the characterization of rocks collected from different mines to see how the ores and their host rocks react to microwave energy.

Because the technology will use high levels of open-ended microwaves released into the air, it could expose workers to hazardous levels of microwave radiation.

“But the design of the application can make it safe,” said Nekoovaght.

“Depending on the design of the TBMs, we will be able to ensure energy is going only toward the rock. In the case of TBMs designed with multiple disc cutters on a round face, the face is metallic. The microwave energy is either going to be completely absorbed by the rock or reflected back to the metallic TBM face, so it will reflect back toward the rock.”

For the new commercially available mobile miners with cutters on the wheel, the microwave antenna could be mounted on the side of the wheel and measures would be added to contain the microwaves. In any case, the future of TBM technology is autonomous or at least remotely operated, so that too will reduce safety concerns.

Now, Nekoovaght has to find funding, technology and mining partners.

“Since the project is still at a laboratory scale, and mining companies are quite conservative in investing in novel technologies, they are waiting until the performance of the technology can be proven.”