More power. Less fuel.Miners’ laissez-faire attitude toward hydraulic fluid has them leaving money on the table

Miners’ laissez-faire attitude toward hydraulic fluid has them leaving money on the table
SPONSORED
September 01, 2017 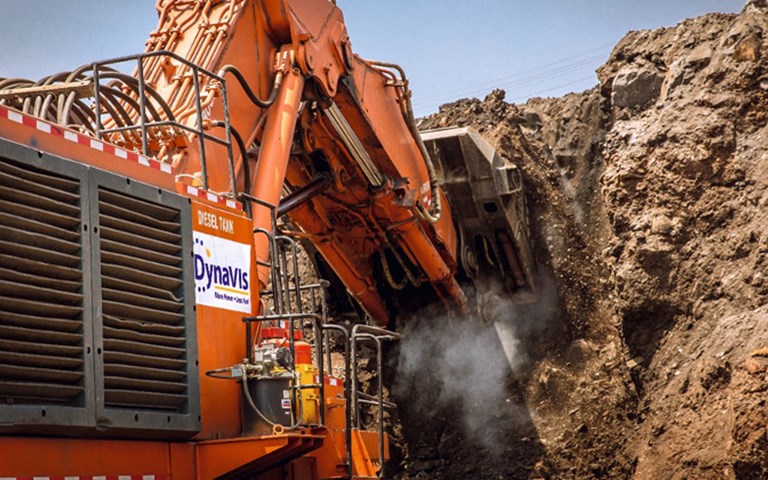 Using high-quality hydraulic fluids in critical equipment such as excavators can have a huge impact on an operation’s costs and productivity. Evonik Industries

This article was provided by Evonik Industries

Most mine operators understand the cost-saving potential of effective equipment lubrication. But, looking more closely, it is clear they do not understand just how much of an impact it can have on the total cost of ownership, and ultimately, the mine’s bottom line after fuel savings, increased equipment productivity, reduced down-time, lower maintenance costs due to reduced wear and tear on equipment and improved oil drain and maintenance intervals are all accounted for.

According to an extensive industry survey by Edelman Intelligence, 60 per cent of mining companies believe that cost-savings of greater than five per cent are possible through proper lubricant selection and management; however, only a quarter think that those savings could exceed 10 per cent and nearly half do not believe that choosing a higher-quality lubricant will help reduce maintenance costs. At the same time, nearly all the mining companies surveyed reported unplanned machine shutdowns in the last three years, and more than half acknowledged that these shutdowns have been due to their incorrect selection or management of lubricants.

So where is the disconnect? Choosing the correct hydraulic fluid depends on a combination of the equipment’s design characteristics, operational parameters and environment. Factors like temperature, humidity, dirt and location (altitude/underground) all pose different challenges for lubrication. OEMs generally define the minimum requirements for lubricants or greases. However, not all products that meet these standards deliver the same level of performance. With its registered and patented Dynavis technology, the Oil Additives business line of Evonik Industries has been working towards setting a higher industry standard to significantly improve not only the fuel efficiency of mobile mining equipment but also the productivity of the machine. High-quality multigrade hydraulic fluids work by broadening the temperature operating window and delivering more constant viscosity even under extreme shear stress.

Reliable hydraulic performance in a wide range of temperatures

By using monograde oils or low-performing multigrade oils there is an increased risk of corrosion and sludge build-up, increased wear, and cavitation (air pockets) that lead to faster degradation of the oil, filter blocking and valve sticking, and increased oil use, which results in equipment damage, premature failure and replacement of components, loss of operating precision, excessive noise, increased maintenance, and expensive downtime.

The key differentiator of high-quality hydraulic fluids to lower-quality oils is improved shear stability and improved performance, especially at lower temperatures and the ability of the oil to provide improved viscosity control under extreme conditions. This ability to operate in a larger temperature window so that the oil remains thin enough at start-up to circulate quickly enough to protect critical components, and thick enough at temperatures of 90°C to provide the necessary protection to help prevent abrasive wear, is described as viscosity index (VI). While long chain polymers guarantee effective thickening of the hydraulic fluid, short chain polymers provide shear stability, which helps to avoid the breaking of the lubrication film.

Dynavis-formulated hydraulic oil guarantees an optimal performance in a wider temperature operating range, expressed by the high VI of >180 and a viscosity grade of ISO46. 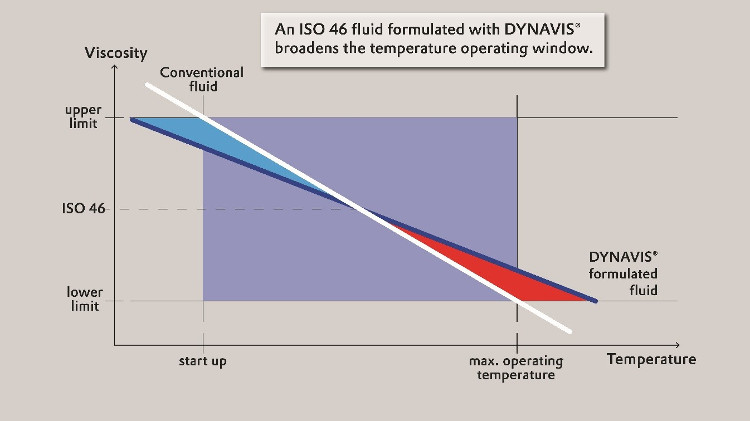 With an improved VI and increased shear stability, a high-quality multigrade hydraulic fluid improves productivity and machine maneuverability, while extending machine life and oil drain intervals, allowing for less time and money to be spent on maintenance and improving safety on site through reduced man-machine contact. 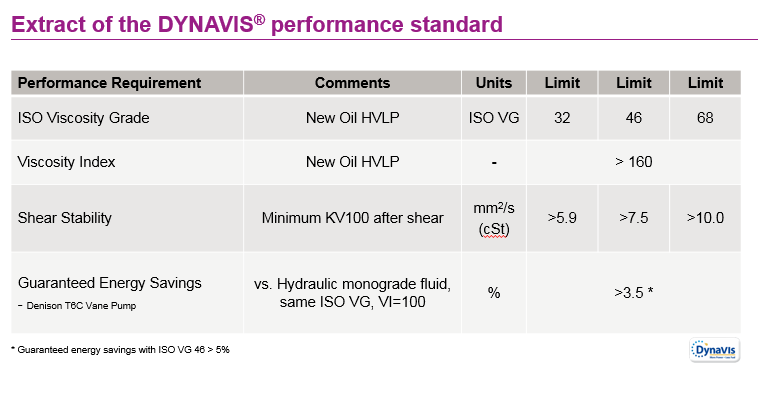 Considering that the fuel used for on-site haulage in a mine site operation can exceed 50 per cent of the total energy costs, there is potential for significant financial savings, especially at remote mining sites.

Burning less fuel also translates into fewer carbon dioxide (CO2) emissions,which is an immediate concern, with carbon taxing being implemented nationwide in Canada by early 2018. Following Alberta’s model, the Canadian government has proposed a floor price for its nationwide carbon tax system at $10/tonne and increasing to $50/tonne by 2022.

According to field test results Evonik Industries conducted with a single excavator over a drain interval of 4,000 hours, the machine using a fluid formulated with Dynavis technology uses 3,300 fewer gallons (13,000 fewer litres) of fuel compared to the reference fluid. This translates to 33.3 tonnes of reduced CO2 emissions per drain interval for a single excavator, based on the U.S. EPA’s standard for CO2 production of 10.08 kg/gallon diesel.

Considering what Jim O’Rourke, CEO of Copper Mountain, stated in a recent CIM Magazine article: His copper mine, with 22 trucks and the need for 30 million litres of diesel per year, generates carbon-tax expenses of $2.3 million annually (1.5% of his total budget). These costs are projected to rise to $3.8 million by 2020. Although lubricants obviously will not solve the carbon conundrum alone, they can play a role in mitigating rising operational costs. The total economic impact is even larger when the additional operating cost savings resulting from the increased productivity are included in the savings calculation.

Operating a mine in a profitable and safe manner while minimizing waste and CO2 emissions are clear objectives for mine operators. The challenge of accomplishing these objectives can be exacerbated in extreme climates, like in Canada’s Far North, where costs rise due to lack of infrastructure, limited or difficult access to the site, the need to fly in equipment and personnel over large distances and harsh weather conditions that increase the demand for power (usually diesel-generated). Operating costs for a mining project in northern Canada are in fact estimated to be up to 2.5 times higher for base metals than in other mining regions with access to infrastructure. Considering that energy costs can account for 30 per cent of operating expenses in remote regions (in comparison to 10-20 per cent for a mining site in a less remote area), economizing energy and diesel consumption can be a real game changer. Not to mention, machine stand-stills and equipment failures can incur significantly higher costs for remote mining operations making machine maintenance a key equipment ownership cost.

Considering that a gold mine in California, which is not located in an extreme climate, was able to generate estimated annual savings of US$1.1 million by switching to a high-performing multigrade fluid in only two 250t Terex excavators, choosing a high-performing hydraulic fluid can play an even more significant role in managing operating costs at remote mine sites. In fact, Shell Lubricants estimates an overall savings potential in the North American mining industry of US$29.1 million by switching to high-performance multigrade fluids.

This article was written by Aarti Mona Soerensen, who heads the Competence Centre for Mining and Mineral Resources at the Canadian German Chamber of Industry and Commerce Inc. in Toronto. In her capacity she provides market entry support and customized consulting services for German companies in Canada and supports the development of strategic business partnerships between Canada and Germany in the mining sector.

[1] For the performance demonstration, a large excavator weighing 111 metric tonnes and powering 567 kW engine output was monitored under standard working conditions during a 19-shift period, digging 75-85 tonnes of material for each truck trip, summing up to 40.000 tonnes of material moved and 450 truck trips during the whole course of the field study

[2] In order to not falsify the tonne/litre ratio caused by machine still stand, measurements were only done when an installed pressure sensor at the pump outlet recorded a pump pressure above 3 bar, meaning that the excavator was digging and moving material. Measurements under same mining conditions were also run with the previously used reference fluid (A: ISO46, VI: 150) prior and after the test with DYNAVIS® hydraulic oil (B), following an A/B/A scheme.