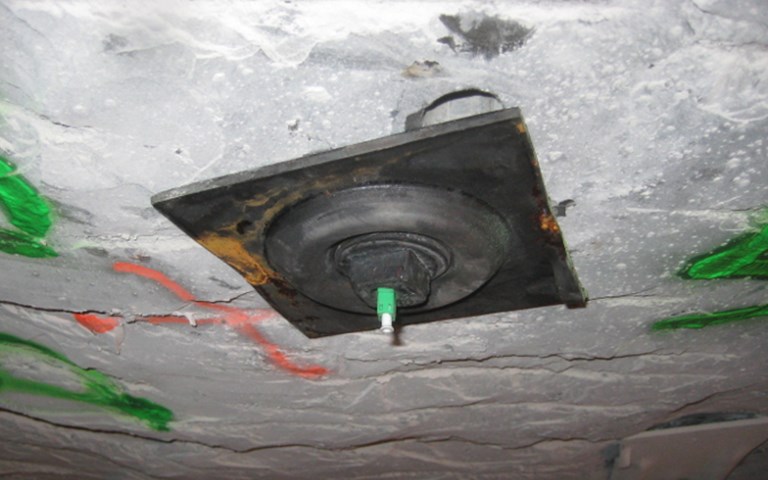 Researchers at SIU were able to calculate strain profile over the length of instrumented bolts. Courtesy of Todd Kostecki

Any mine support system will experience strain from surrounding rock, but understanding the direction and force of that strain allows miners to harness it in underground construction rather than fall victim to bent bolts and unpredictable failures.

A Southern Illinois University (SIU) research team in association with Yieldpoint Inc. has developed a new research tool to investigate the effect shear stress has on roof bolts. By carving three slots along the length of the bolts, looping a length of fibre optic cable through the three slots, and analyzing light behaviour when force is applied, the researchers were able to calculate strain profile over the length of each bolt. Test monitoring in two Illinois coal mines showed that the technology worked in an underground setting.

“We have very few devices to calculate the axial and shear stress,” said Kashi Vishwanath Jessu, who was a part of the project as a graduate student at SIU in 2015 and is now a PhD candidate at Curtin University in Australia. This innovative use of optical fibres in a three-slot design was developed by the SIU research team in collaboration with technology supplier YieldPoint of Kingston, Ontario. Todd Kostecki, PhD candidate at SIU; and Sam Spearing, then an associate professor in mining engineering at SIU and now acting director of the Western Australia School of Mines at Curtin University, were the lead graduate student and principal investigator on the project, respectively.

Jay Emery, chief engineer at the participating Gibson South mine, said that accurately estimating the direction of horizontal stresses is critical to mine planning. Previously available resources include public data on the Illinois Basin and earlier instrumented bolt technology that uses discrete resistive strain gauges. In contrast, he said, “the optical sensing test bolts present an opportunity to gather information continuously throughout the entire length of the bolt, and specific to this mine rather than regional.”

Kostecki and Spearing had previously partnered with YieldPoint in 2010 to run a different instrumented bolt project in underground coal mines. In the 2014 project, they tested the use of optical fibres as sensors. When a beam of light is directed through an optical fibre, the core of the fibre refracts that light. If the fibre is epoxied into long slots in a roof bolt, then the strain the bolt experiences will minutely change the fibre’s shape and therefore the way its core refracts light.

The project tried out two different fibre optic technologies. The first, distributed optical sensing (DOS) measures continuously along the fibre. With DOS, strain can be calculated at multiple points within the space of a millimetre. A 48-inch bolt could have 4,500 strain points. Earlier strain gauge bolts might have had only ten gauges total. The second type of sensor, a fibre-Bragg grating (FBG), is not continuous, but is less costly and less sensitive to dust interference than DOS.

Previous instrumentation studies had used only two diametrically opposed slots. That meant that any strain directed at certain angles in relation to the slots would be difficult to interpret. Someone who needed to collect shear data in their mine would have to know the mine’s shear-plane orientations already, and would have to accomplish the difficult task of installing the bolt at the correct angle to the shear plane.

But with three evenly distributed slots cut into the bolts, strain from any angle would be apparent from at least two of the slots. “The idea behind the three-slot design is so we don’t have to know how the slots are oriented with respect to the shear plane,” said Kostecki. “When the bolts begin to develop strain, it should give us all the information we need.”

To test both their technology and their method of analysis for calculating strain, the team started in a lab setting by applying force to both two-slot and three-slot instrumented bolts. In controlled bending tests, the bending strain calculated was close to theoretical values – and the three-slot setup picked up strain that the two-slot setup did not. The tests are described in detail in Jessu, Kostecki and Spearing’s recent paper in CIM Journal.

Kostecki said that it would not be obvious which is shear strain, and which is axial strain, just by looking at strain profile. “With experience and in a controlled setting you can look at the total strain profile of a three-slot instrument and make an educated guess,” he said. But to be sure, one would need to know the actual positions of the slots in the bolt and calculate out the axial and shear strain.

After confirming the technology worked in principle, the team needed to show it would still work in the damp and dust of a working mine. They contacted two local coal mines, including Gibson County Coal’s South mine, to enquire about participating in the project. “The engineers and mine personnel always show great interest in these types of projects because they are so unique,” said Kostecki.

He praised the patient help of the mine personnel. Rock bolt operators at the mines conducted the installation themselves. Ryan Carey, roof bolter operator at Gibson County Coal, explained that these research bolts took extra care, because from each bolt protrudes a connecting port that allows the fibre optic data to be logged by separate equipment. The spinning movement when bolts are mechanically installed can damage the hair-thin optical fibres.

“Near-perfect alignment of the roof bolting machine’s drill head and the roof bolt is critical,” said Carey. “Extra time was taken to assure each drill hole was straight and aligned with the drill head throughout bolt installation.”

At each of the two mine sites, SIU students spent about a month monitoring the fibres hourly for sixteen hours a day. At each reading, they plugged a fibre from a data logger into the connector in each bolt.

“This may seem like overkill, but when you’re dealing with optical fibre interrogators that are very expensive, you want to make sure someone is at the site in case something unexpected occurs,” explained Kostecki. Plus, he added, some instruments develop signs of strain over several hours. “Strain like this is what really gets us excited and you don’t want to miss it.”

As of March 2016, the research team had collected data from both mines, covering multiple installations of two-slot and three-slot bolts, fitted with either DOS or FBG. A full analysis will appear in Kostecki’s PhD thesis, but some initial results are already clear.

First and foremost, the technology worked underground. There were challenges, admitted Jessu. DOS showed excellent results, but is vulnerable to breakage and dust interference. FBG also works well, but to approximate the level of detail in DOS results would require more reflectors per bolt – a significant cost increase.

Kostecki added that the strain data itself was a bonus, sometimes an exciting one. “We were able to deduce the initiation of a shearing plane at one of the mines with the three-slot instruments,” he said. “This confirmed our lab results, where we were applying a force around the circumference of a three-slot instrument, and trying to detect the direction of the force. We even consulted with the mine afterwards and this was indeed their inferred direction of shear.”

The larger goal of the project was to better understand and improve upon the industry’s approach to mine design. “Through this path we can better design our mine entries and rock bolt systems, which we believe will provide a safer working environment for the miners,” said Kostecki.

Kostecki said his research team will hopefully conduct another underground instrumentation project in several years if funding becomes available again. The project was supported by the Alpha Foundation for the Improvement of Mine Safety and Health, established in 2011 following a lethal explosion at the Upper Big Branch coal mine.

“We do anticipate that if this research gains some attention, it has the potential to be taken up abroad with different mines,” Kostecki said, “most likely in Canada and Australia.”