New insightsHighland Valley Copper takes the measure of its crushers

Highland Valley Copper takes the measure of its crushers
By Kelsey Rolfe
June 08, 2015 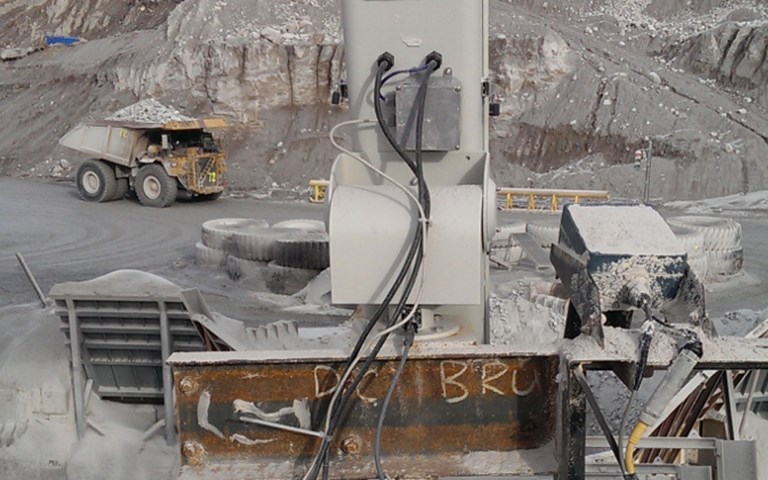 Crusher Vision’s new camera system is laser guided and can measure the closed side setting of a gyratory crusher remotely. Courtesy of Crusher Vision

Teck’s Highland Valley Copper approached Crusher Vision in 2009 with the hope of finding a way to more accurately predict mantle life and reduce downtime for its gyratory crusher. At the time, the mine was using the bucket test – having someone manually lower a tin can into the crusher to be squished between the mantle and concave, then bringing it back up to measure its width and adjust the mantle based on the measurements. “It was kind of a crude, informal but reasonably accurate way of doing it,” said Clint Ellison, Highland Valley’s mill maintenance superintendent. “But you’re relying on the operator a lot that way.”

Highland Valley installed the Crusher Vision automation system (CVAS) in December 2013 on one of its three gyratory crushers. The system, designed by Crusher Vision’s president, Tom Shumka, at the request of Highland Valley, is a camera that uses a laser guide to take a photo of the crusher’s closed side setting, which eliminates the need to squish tin buckets. The measurements CVAS captures are far more accurate, the measuring process safer, and the copper and molybdenum mine, located in Logan Lake, B.C., has seen the mantle life on its crusher extended by 20 per cent as a result of installing the system.

Checks were done inconsistently before CVAS. “We were basing all our mantle adjustments off these inconsistent bucket ratings,” said Ellison. “We’d leave them in one spot too long because the bucket measurements hadn’t changed.” Previously, the mantle would be adjusted every few days, which is long enough to bell the mantle or create an uneven wear pattern. The adjustment interval has now been reduced to every 24 hours or 60,000 tonnes, whichever comes first.

“We were putting our heads together,” Ellison recalled of the meetings he had in 2009 with Shumka to find a solution. They decided a laser-shot camera – which uses a laser to locate the optimal framing and focus for the photo – would be the best fit because of its accuracy. “Other systems measure mantle wear; we don’t,” noted Shumka. “We were more concerned with the closed side setting or open side setting.”

CVAS is a compact, high-speed camera that is positioned on the structure above the crusher’s pocket, on a simple bracket. Once a day, the feed on the crusher is turned off for a minute to allow CVAS to take its shot. The laser shoots down to the closed side setting – the narrowest opening of the crusher’s jaw – where the camera focuses in to take its measurement.

“You’re not reliant on how a person interprets the measurement,” said Ellison. “It’s all automated, so it records a number. It’s very simple, and it can be done without throwing anything through the crusher.”

Having an automated system also eliminates the safety hazard associated with workers who manually lower a tin can into the crusher for daily measurements, and Ellison said it is a simple system on which to train workers. “The other nice thing about this is it can be done remotely,” added Shumka. “It doesn’t have to be done right at the crusher; this could be done in the control room, up in the mill control ops area.”

To achieve higher mill throughput, Highland Valley’s crushers pretreat the ore before it heads to the mills and are run at a closed side setting of five to five and a half inches. Operating under the old system, if the setting was too tight it would reduce the tonnage moving through the crusher; if it was too large, it would send coarse material through the mill. The accurate measurements from CVAS, Ellison said, are giving Highland Valley a more consistent crush than what they had before.

“The value is sending the right size to the mills so we get maximum throughput through the mills,” he explained. “That was one of the downfalls of the inaccurate system that we used to use: we weren’t crushing to our potential.”

Having the accurate measurements from CVAS also allows Highland Valley to raise the crusher’s mantle more consistently, and extend its life. Ellison said they now raise the mantle a tenth of an inch every 24 hours, and since installing CVAS have seen the life of their mantles, typically seven weeks, extended by almost a week and a half. “The amount of wear we’re seeing on our mantles has been drastically reduced,” Ellison noted.

Shumka said CVAS has eliminated one mantle changeout per year at Highland Valley and helped reduce crusher downtime. “That’s pretty significant because they shut down for 24 hours [to change out the mantle], so that’s lost production,” he said. “You have 24 hours of manual labour, and you’ve got the cost of the component. And being able to remotely operate this system, there could be an economic benefit there, too.”

For his company, Highland Valley provided a year-long testbed to confirm the system’s reliability. The first few months were spent ironing out small kinks. Shumka compensated for the dusty environment by installing a wiper on the camera to keep it clean and functioning properly, and the system was positioned above the crusher rather than on it, to stop it from being violently shaken by the machine. There were also adjustments made to the camera’s speed and programming.

Now, Crusher Vision is going to market with the system. “We’re starting to get phone calls from all over the world,” said Shumka.

At Highland Valley, CVAS is currently hooked up to a small laptop on site, but the next step is to get it connected to the site’s internal communications system so it can be monitored from anywhere on the property, or even off site. Another CVAS was recently installed in the site’s second crusher, and Ellison said they are planning to equip the third crusher once it is approved in the budget.

“We’re partway to where we want to be,” Ellison said. “We’re finally to the point now that we have a good system in place and we’re looking at upgrading our other crushers with this system now.”