Faster sensors have upped the potential for ore sorting in mine operations
By Andrew Topf
July 17, 2017 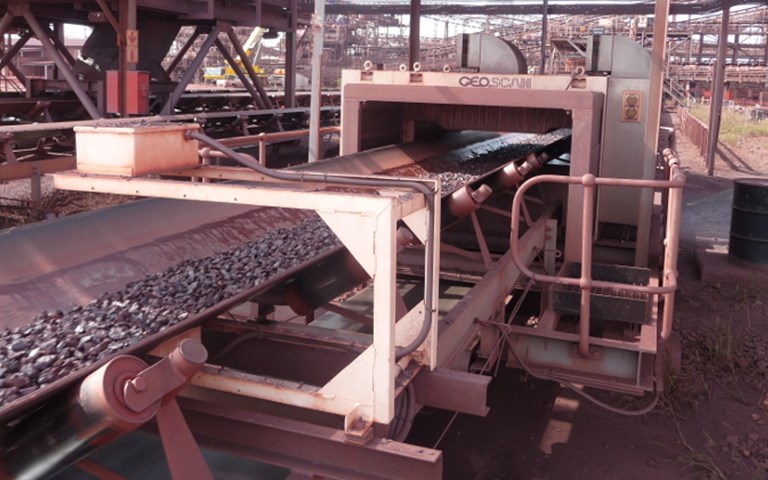 Scanning times have dropped significantly, allowing mines using ore sorting to more accurately assess the grade of the feed heading to the mill. Courtesy of Scantech

When commodity prices were high, miners could afford minor inefficiencies in their operations. But now, as the low-hanging fruit of high-grade deposits is mostly picked and companies are forced to mine deeper at more remote locations and lower grades, they are looking for ways to become more efficient.

A good place to start is the mill, typically a mine’s largest consumer of water and energy. Reducing the waste rock going into the mill can reduce a mine’s water and energy requirements, while improving its economics.

That is why ore sorting technology is gaining a lot of attention. The potential of scanners that enable the operation to determine ore composition and grade before it hits the grinding mill or flotation circuit is huge.

Recently the biggest advancement in ore sorting has to do with speed. Sorters can now achieve faster results, allowing smaller groups of rocks to be sorted; the smaller the rock grouping (or “packet”), the better the grade recovery. Over the last 18 months, conveyor-scanning times have dropped from two minutes to around 30 seconds without sacrificing much accuracy, according to Brent Hilscher, principal process engineer with Sacre-Davey, a Vancouver-based engineering and project management consultancy.

“If you can sort five-tonne packets of ore rather than 20-tonne packets, you can create a higher-grade product and a lower-grade reject and your grade recovery curve is shifted,” explained Hilscher. While accuracy and speed are trade-offs, Hilscher said operations can afford to reduce their accuracy by a couple of percentage points in order to scan a smaller packet. “If you’ve got 99 per cent accuracy, but you have a two-minute long packet size, it might be worth getting that packet size down to one minute at 98 per cent, or 20 seconds at 95 per cent accuracy.”

The approach can be divided into categories: particle sorting, where individual rock particles are scanned, and bulk sorting, where a group of crushed rocks is sorted and run through a sensor or group of sensors.

If lower-grade ore can be diverted out of the mix before it is sent to the mill and that capacity replaced with ore identified as higher grade, the lift to revenue can be substantial.

“If you can reduce your milling times by half, and then double your metal production because you found enough ore to replace it that has a tremendous impact on the economics,” explained Hilscher. “So that’s normally how it ends up being justified. It is based on additional tonnage.”

Indeed an ore sorting system can result in more cost savings down the processing chain. Henry Kurth, vice-president of sales in North America and minerals consultant with Scantech International, said diverting waste ore can save between $7 and $10 a tonne because not processing that material avoids using grinding media, reagents, electricity and water needed to pump the slurry as well as having to dispose of the waste it would have generated.

Vancouver’s MineSense offers both options, employing X-ray fluorescent sensing (HS-XRF), which scans the material over 20 times per second, allowing it to measure and report ore grades for a range of metals including nickel, copper, copper-gold, iron, manganese and other bulk minerals. MineSense describes its flagship ShovelSense product as “a real-time mineral telemetry and decision support system for surface or underground applications.”

Sensors fitted onto shovel dippers, hydraulic loaders or underground scoops measure ore quality as material is being scooped into the bucket. Founder and CTO Andrew Bamber said the sensing technology shares DNA with XRF assay analysis or field geochemistry using hand-held devices. “Imagine that technology being put on steroids in a number of dimensions,” he said, including size, range, speed and accuracy required of the shovel application. A visual signal tells the machine operator whether to dump the bucket into a truck headed to the mill for processing or into a waste truck. The measured grade can then be transmitted via Wi-Fi or 3G to ore control or mine planning systems.

MineSense's shovel-mounted technology lets operators measure ore quality as it is being scooped and alerts them if the ore is not up to specification. Courtesy of MineSense

He estimated that MineSense can increase margins by 25 per cent on average, depending on factors like the cut-off grade and stripping ratio.

Australia-based Scantech offers a range of analyzers that measure the quality of the material on a conveyor belt in real-time – usually over 30-second to two-minute intervals. The analyzer, which fits around the belt, uses Prompt Gamma Neutron Activation Analysis (PGNAA) technology to inspect a packet of crushed ore, up to half a metre deep. A radiation source fires hundreds of millions of neutrons per second at the ore packet, which are then absorbed by elements in the rock. The ore gives off gamma rays, whose energy is measured by the analyzer, thus identifying the elements in the packet and giving an average grade for each. The data is then transmitted to a control room, which sends a signal to a diverter that either moves the higher-grade ore to the mill, or diverts it to a waste stream.

According to Kurth, PGNAA is unique in that it penetrates through the full depth, whereas other scanning technologies measure parts of the surface with only a little penetration. The data it gives can be used to assist the plant operation further down the line. For example, the identification of silica could help the plan operator control the mill feed, since harder material takes longer to break down.

Finland-based IMA Engineering has a Fast Conveyor Analyzer (FCA) that it says gives real-time analysis at the crusher, which is used to mix different ores to get targeted grades in the mill feed. The FCA analyzer employs X-ray fluorescence technology.

Shovel and conveyor-based systems each have their pros and cons. For shovel-based sorting, the packet size is limited by the size of the shovel. Ideally each shovel would load two trucks, one for ore and one for waste, but for operations, that could mean expanding the truck fleet – an expensive option.

The advantage of shovel-based sorting is that it happens earlier in the mining operation than conveyor-based sorting, allowing for maximum heterogeneity of the broken rock. “The lion’s share of the value created in a MineSense application is something that other sorting solutions can’t do, and that is to recover ore from waste, in situ,” said Bamber.

“By instrumenting the shovel and making it intelligent to the grade of material loaded, shovels operating in a waste bench can be used to recognize ore grade material that’s actually included in that waste bench, but hasn’t been recognized by the modelling or planning process, recover that and get it to the mill feed stream. Competing ore sorting solutions do not address that.”

The earlier in the operation that sorting can occur, the greater the grade recovery curve because it avoids blending. The curve is also enhanced by smaller packets, which increases scanning accuracy.

Each operation is different

Ore sorting is not a one-size-fits all solution. The kind of sorting and sensing technology required depends on the particular needs of the mine and its grades.

Hilscher said for bulk ore sorting, the degree of mill grade improvement is limited because unlike particle sorting, there is still a lot of waste rock blended into the ore. An increase in the mill grade of between 20 and 30 per cent is a reasonable expectation.

The decision on whether to go with bulk or particle sorting depends on the grades. If the deposit is low grade, bulk sorting makes sense because the mine can afford to discard some metal if it means raising the average grade going to the mill. For a mid-grade deposit, bulk sorting could be too costly, because too much metal will be sent to the waste pile. And a high-grade operation can skip the sorting altogether.

Then there is the amount of material that has been mined versus the mill feed rate. To keep the mill running at capacity, for every tonne that is diverted, another tonne needs to be added to the feed. This can be a problem for mines that cannot keep up with the mill.

“There are a lot of operations where the mine is the bottleneck,” said Kurth, adding that an operation’s ore-sorting strategy should be flexible, allowing for adjustments to the cut-off grade.

“Every site will have a different strategy to deal with the mine versus mill capacity since the grade variability will be different at every site, so it’s not a cookie cutter approach.”