On a rollPurpose-built and cost effective, a new generation of high-pressure grinding rolls are working their way into the comminution circuit

Purpose-built and cost effective, a new generation of high-pressure grinding rolls are working their way into the comminution circuit
By Alexandra Lopez-Pacheco
April 25, 2018

This installation of Metso's HRC3000 HPGR has been in operation at a copper mine in the U.S. since 2014. Last year, according to Metso, it averaged 71,000 tonnes per day. Image courtesy of Metso

A few years ago, Freeport-McMoRan Inc. (FCX) chose high-pressure grinding rolls (HPGR) over a semi-autogenous grinding mill for the expansion of its Morenci open-pit copper mine in Arizona. In February of this year, Iamgold announced it too would be using HPGRs at its new Côté Lake project in northern Ontario. The same month, Altura Mining also revealed it would be using HPGRs for its lithium mine in Pilbara, Western Australia. And there are many more. Across the globe, a growing number of mining companies are jumping on the HPGR bandwagon. Some believe the technology is now poised to give SAG mills and other conventional comminution equipment a run for their money, which, in turn, could lead to a revamped approach to comminution with far more efficient and streamlined circuits.

HPGRs employ two large, heavy rotating metal rollers – also known as tires – one of which is fixed on the frame of the machine, while the other is floating, attached to a hydraulic system that can be adjusted to exert different pressures, according to comminution needs. The material is fed through the gap between the rollers, where it is exposed briefly to very high pressure. This creates micro-cracks in the particles and produces a significant amount of fine material. It is a dry process, which results in not just higher energy efficiency but also lower water usage and costs in a comminution circuit.

A new technology 40 years in the making

The high-pressure grinding roll was originally developed in 1977 and first used in 1984 by the cement industry, where the technology quickly became a standard. It is not altogether new to mining. It has been used by diamond miners for more than two decades because of its effectiveness in liberating diamonds from softer material without breaking larger stones. The iron ore sector also adopted the technology around the same time because it produces a substantial amount of fine material, which is ideal for pelletizing. In fact, “Iron ore has been the mineral that has pushed HPGR in the minerals industry,” said Tim Lundquist, Weir Minerals’ North America HPGR sales manager.

For the most part, the hard rock mining sector, however, has been reluctant to replace tried and true SAG mills with HPGRs. “I think ten years ago there were a lot of guys in the mining industry that had their lives invested in SAG mills,” said Joseph Dziedzina, FLSmidth’s HPGR global product manager. “Any time a new machine comes along, their initial response is to see it as a threat. It takes a while to work that out. In addition to a decade of proven productivity, you now have another generation of miners who saw HPGRs early on in their studies, so it’s something they know about and there is more acceptance of the technology.” 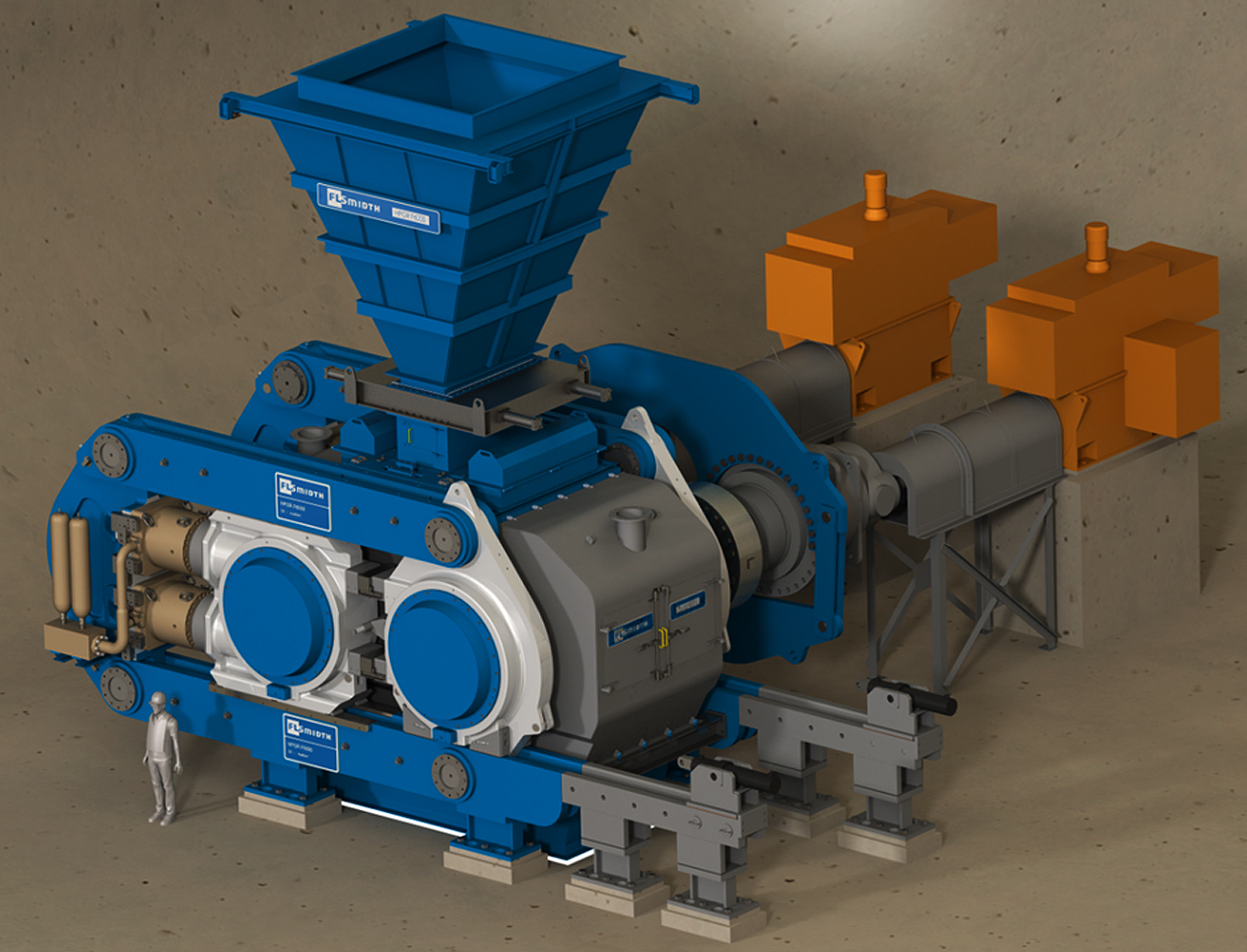 FLSmidth plans to send off its F-Series HPGRs to a project later this year. Courtesy of FLSmidth

Part of that acceptance, however, has been due to improvements and innovations by HPGR manufacturers in adapting the technology used in the cement industry to better address the needs of the hard rock mining sector. And indeed these advancements have turned into advantages for hard rock comminution.

“We tried to develop a machine that wasn’t simply a transition from cement to metals,” said Dziedzina. “We designed machines specifically for hard rock applications, which are more maintenance intensive than cement applications.”

One of the earliest advancements was the improvement of the roll surface design to increase wear life by adding studs, which leads to the formation of an autogenous layer on the rolls that protects the surface. Today, rollers can last between a year and 18 months in hard rock applications before they need to be replaced, said Lundquist.

From extending the life of the tires, manufacturers then turned their attention to reducing the downtime involved in replacing the large and heavy rollers by using open-frame designs rather than the traditional box designs in cement HPGRs, which had to be disassembled to replace the rolls. “Most manufacturers have incorporated a fast tire change so if you can do your roll change in 24 hours or less and you are only doing that once a year or so, that’s it. You are down to the 24 hours of downtime,” said Lundquist. “That means 95 to 97 per cent availability of your circuit with an HPGR.”

Adapting the technology to mining has also required making bigger equipment than used in the cement industry. “Because grades are lower and lower these days,” Rüdiger Dicke, HPGR sales support manager for TAKRAF, whose largest HPGR can process 5,000 tonnes per hour. “You have to process more and more tonnes to achieve the same output as before. This requires bigger machines, so the roller dimensions become bigger and bigger.”

Manufacturers have increased the size of rollers but it has been a challenge. Simply enlarging traditional designs resulted in uneven feed distribution that skewed the tires out of their parallel positions. Metso lead the way in this by developing an innovative patented Arch-frame for three metre diameter by two metre-wide rolls that do not skew. The company’s 900 tonne-HRC 3000 was first installed in 2014 in FCX’s Morenci mine and remains the world’s largest HPGR.

There is one area where the technology continues to face challenges and that is ore with a high moisture level. This leads to peeling away of the autogenous layer on the rolls and exposing the steel underneath, increasing wear.

Related: The design details behind Metso’s installation of the world’s largest HPGR at Freeport’s Morenci mine

“We see some projects where HPGR has clear benefits and others where the benefit is marginal,” said Bjorn Nielsen, head of product line dry comminution and sorting for Outotec. “Certainly, for sticky, viscous or clayey ores, the materials handling requirements make HPGR difficult to implement. Even then, it can be done if there’s a driver.”

The benefits of HPGR

“The main attraction to HPGRs is that they are highly efficient compared to SAG/AG mills and also due to their superior ability to process highly competent ores,” has been that they use about 17 to 25 percent less energy than SAG mills said Dziedzina.

They are also very quick to get up and running. “While a SAG mill can take nearly a year from commissioning to its full operation, our HPGR takes six to eight weeks,” said Dicke.

There is a notable downside to HPGRs, one that has held many cash-strapped miners back from purchasing the equipment during the industry’s downturn over recent years:  they have a higher capital cost than SAG mills. Their high availability, ease of maintenance, wear life and limited spare parts, as well as high energy efficiency and water savings make their lower operating costs the selling point. And weighing capital costs against operating costs is something the mining industry is now putting far more thought into than in the past.

Ironically, it is the hard rock sector, which has been the slowest to adopt HPGR, that could most benefit from the technology, both in return on investment as well as improved comminution.

“The harder the ore, the more likely HPGR is to give sufficient reduction in energy, water and wear parts to overcome the higher overall capital cost usually associated with HPGR circuits,” said Bjorn Nielsen, head of product line dry comminution and sorting for Outotec. “In extreme cases, the HPGR circuit may be the only viable process route or could be lower capital cost than conventional grinding circuits.”

HPGR technology can also have in impact on performance further down the processing line. The micro-cracks in the course particles that remain through the process help improve leaching and flotation efficiencies. “It lowers the amount of work needed. In a leaching plant, for example, the micro-fractures, or canals, increase the kinetic speed and recovery,” said Lundquist.

HPGR’s ability to improve crushing efficiency has major implications for the design and operation of comminution circuits, said Herman. “In closed circuit applications the increased breakage rates provide higher energy efficiency by reducing circulating loads and potentially decreasing the size of ancillary equipment,” she said. “Alternately, the increased breakage rates could allow for a finer product on the HPGR circuit which decreases the demand of downstream equipment.”

Dziedzina said he believes, “the next step might be to completely eliminate all grinding mills from the comminution circuit and get to that final size ready for separation just with HPGR and air classification.”

It is still early days to know where HPGR will take comminution in mining, said Lundquist. “But if you look at all the main mining equipment manufacturers, pretty much all of them have jumped in on HPGR within the last few years,” he said. “That’s really a sign of what’s to come. Over the next ten years, it’s going to become commonplace.”