Goldcorp and Sandvik partner to deliver all-electric mine at Borden Lake
By Christopher Pollon
December 15, 2016 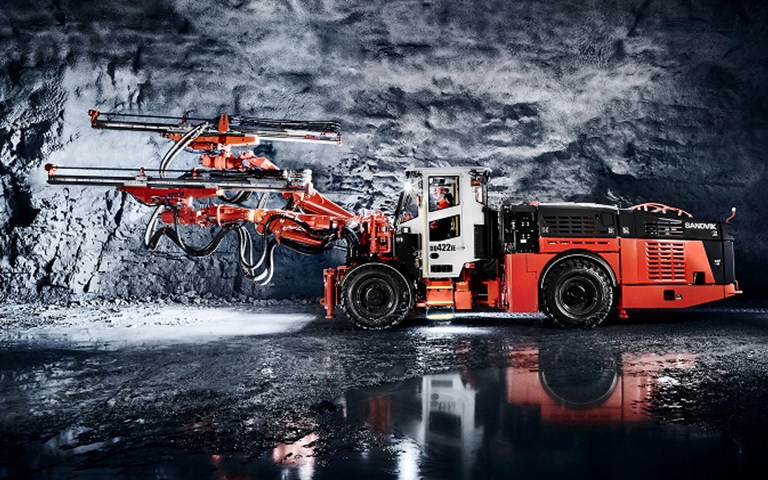 Electric fleets are working their way into the mining industry. Kirkland Lake has been using electric LHDs and haul trucks at its Macassa and South Mine Complex since 2012 and Glencore plans to operate only electric vehicles at its Onaping Depth nickel-copper deposit in Sudbury. Goldcorp is the latest company to plug into this trend. In September, Sandvik announced it had partnered with Goldcorp to design the Borden Lake project in Chapleau, Ontario, as an all-electric mine.

“The whole mobile fleet would either operate on battery or tethered electric equipment,” said Marc Lauzier, mine general manager at Porcupine Gold Mines (PGM), a joint venture between Goldcorp Canada Ltd. and Go ldcorp Inc. that will operate Borden Lake. “That would include scoops, trucks, any auxiliary equipment such as jumbos, bolters, as well as boom trucks, even down to the man carriers.”

Borden Lake, which is still in the advanced exploration stage, is expected to have a mine life of about seven years, boosting the local economy of an area depressed by the slowdown of the forestry industry. Goldcorp acquired the project from Probe Mines in 2015.

As far as Lauzier knows, the all-electric underground mine they plan to build here will be a first in Ontario, and possibly the world. “We’ve been using electric gear on and off in mining for some time; usually you get a mish-mash of some diesel and some electric,” he said. “But the battery technology is new and allows us to run a mine that will have no diesel engines whatsoever.”

The big technological improvement in the past 10 years that makes this vision possible is the advent of quick-charge equipment. “What you want are high-voltage outlets where you can plug in the equipment, like drills and bolters, and they recharge usually on a 30- to 40-minute cycle,” explained Lauzier. “So while an employee is having his lunch, say, the equipment can recharge and the battery is ready to go for another half shift or more.”

Once in full production, PGM estimates there will eventually be 35 pieces of mobile electric equipment operating on the site, most using on-board chargers. The mine will use two types of electric equipment underground: ones that are tethered while operating, and others with electric motors that derive their power from stored energy in batteries. The former (e.g., drills and bolters) will be permanently connected to the grid via a typical electric cable extension, which recharges the battery as needed. The drills plug in while drilling and use batteries when moving between levels and faces. The latter, for example a grader or boom truck, will have an onboard charger that is plugged in only when a charge is necessary. This will rely on quick-charge technology, which can provide full duty cycle from less than an hour of charging.

Equipping a mine with an all-electric fleet has implications for the mine design. The company will have to accommodate the need for many more recharge and, to a lesser degree, battery change-out stations. “We are trying to stay away from swapping batteries, which is being replaced by quick-charge technology,” said Lauzier.

Many electric vehicles recharge their batteries when the brakes are applied, which means work passes and systems must be designed to maximize the downhill movement of loaded trucks, such as carrying the muck down ramps to a centralized area. “The more downhill you can do, the more regeneration you can do, and the longer the battery cycle will be,” said Lauzier. As it stands right now, construction of the decline ramp at Borden Lake will begin in 2017, with a bulk sample accessed and analyzed by the second quarter of 2018.

To power this all-electric mine, Borden Lake will rely on its partner Sandvik Mining and Rock Technology to provide “the total solution” for the development of drills, trucks, loaders, and jumbos (PGM said man carriers will be supplied by another company). Sandvik marketing manager Kerry Falk said that because battery-powered equipment is a relatively recent development for underground mining, Sandvik does not yet manufacture electric versions of all the equipment PGM will eventually need at Borden Lake. According to Falk, the mine will initially use a combination of tethered electric loaders and trucks that rely on Tier 4 diesel engines. That said, Sandvik has committed to developing battery technology for its bigger scoops, and by the time Borden Lake comes into production, in the second quarter of 2019 if all goes as planned, PGM expects to have at least some battery-powered trucks for use on the site. (Sandvik declined to predict a date for the full electrification of the mine.)

Sandvik has already developed a battery-powered jumbo, the first of its kind on the market, according to Falk. The all-electric, two-boom Sandvik DD422iE jumbo was featured (and demonstrated) at Minexpo in Las Vegas in September.

By eliminating the diesel that drives such machinery, the company can drive narrower drifts that do not need to account for the additional space ventilation requires. (Due to the shallowness of the ore body, instead of shafts, the gold will be accessed via a ramp, with the levels coming off the ramps.) It also reduces the amount of energy needed to operate the underground mine by about 50 per cent. That is largely because it eliminates the need to ventilate diesel fumes, which produces cost savings that help make an electric mine economically feasible. “One of the risks of electric gear is that it costs you more in the upfront capital, but over the life of a mine, I actually think you’re going to save,” said Lauzier. “You should at least break even or find it cheaper because of the ventilation savings.”

Cost savings from ventilation was one of multiple considerations that led the company to commit to an electric mine at Borden Lake. Cutting out diesel will also reduce local exposure to diesel particulates and other air contaminants, not to mention lower noise levels and vibration. And the reduction of liquid fuel will result in less delivery traffic on local roads. Lauzier has family in the Chapleau area and knows first-hand that PGM is bringing mining to a community that does not have a long mining history and is not used to living in close proximity to such an operation. Several First Nations communities also live in the vicinity of what is a large, spring-fed lake, dotted with cottages and fishing lodges. “Chapleau is a pristine area, so we want to have a small footprint [and] minimize any environmental impacts we’re going to have,” he said.

Looming regulations provide another incentive. More stringent provincial standards for nitrogen oxide emissions – contaminants created from diesel combustion – are coming, and at the beginning of 2017, Ontario will require a cap and trade program for facilities that generate more than 25,000 tonnes of greenhouse gases (GHG) annually. Meanwhile, a federal price on carbon will impose a minimum cost of $10 per tonne of GHG emissions in 2018, rising to $50 per tonne in 2022.

At Goldcorp’s underground mines in Canada, its mobile fleet accounts for about 60 per cent of its total emissions, so the single biggest opportunity to reduce emissions and their cost is through fuel switching, which is why the company is looking at all the opportunities battery and electrical vehicles represent.

Once the mine is up and running, ore from Borden Lake will be transported 180 kilometres to Timmins for milling. PGM estimates that going all-electric at just this one mine will eventually eliminate three million litres of diesel, 1 million litres of propane and 30,000 megawatt hours per year that in total cuts at least 7,000 tonnes of CO2 equivalent annually.

Lauzier said the company’s goal is now to use more of this type of equipment in all mines going forward, including new mines. He added that the plan for the all-electric mine typically gets two types of reactions from other mining companies. There are those who resist because they are unsure whether it is a good idea to stray from traditional technology, and those who want to do the same but just need to see someone else do it first.

“Deep down, I think everyone wants to go this way sooner or later,” said Lauzier. “But someone has to take the concept forward and prove it, right?”