Drone manufacturers are confident that demand will soon explode for their cost-effective eyes in the sky
By Alexandra Lopez-Pacheco
February 01, 2015 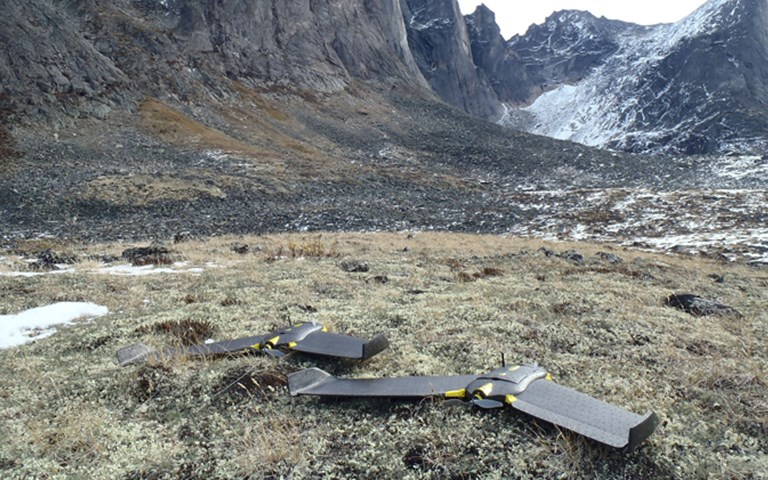 Drone use in the mining industry is expected to take off in the coming years. Courtesy of GroundTruth Exploration

The market for drones in the mining industry is relatively small today. Few mine operators own or use them. But the potential for this nascent technology in surveying and planning is enormous, and drone manufacturers are confident that demand will soon explode for these cost-effective eyes in the sky.

Canada is one of the frontrunners in the civilian use of drones, also known as unmanned air vehicles (UAVs), thanks to Transport Canada. The agency has been gradually opening the skies to them – unlike the U.S. Federal Aviation Administration, which still bans their use except by governmental agencies and university researchers.

The drones being used in mining today are typically small; they fit in a suitcase and most weigh less than two kilograms. They come in various formats, looking like toy airplanes, helicopters or sci-fi spacecrafts. Because they can fly much lower to the ground and far more slowly than airplanes or helicopters, drones can capture detailed surface images. At their most basic, they are equipped with a digital camera, taking hundreds of close-up photographs that the drone manufacturer’s software converts into high-resolution 3D imagery.

A large array of sensors is available and can be exchanged on the UAV depending on the type of analysis required. “For exploration, you can use a combination of multispectral sensors to do investigative surficial geology mapping including detailed topography and formation identification,” says Jean-Francois Dionne, UAV technical survey specialist at UKKO, which sells senseFly – Swiss-made professional UAVs. “Applications are endless in environmental impact management. You can use a thermal sensor and fly when the temperature of ground water is warmer than the terrain. You’ll see precisely the locations of discharge zones to the surface and be better informed for an impact study or a remediation plan. As time goes on, sensors will miniaturize and we’ll be able to add hyperspectral imaging that will make it possible to even locate specific minerals. We’re not there, but almost.”

Timmins-based Kevin Cool, who has been surveying and prospecting for two decades, started offering drone services to his clients about a year ago. In the first eight months after launching his new company, UAV Timmins, he performed some 60 flights. “I’m pretty much doing this full-time now,” he says.

While most of his work has been for established mining companies like Rio Tinto, Cool sees drones changing the industry for smaller and independent prospectors as well. “What drone technology has done is make aerial photos affordable even to the individual prospector,” says Cool. “I can fly a mining claim for a prospector for $400 whereas hiring a helicopter is $1,500 per hour.”

The cameras on Cool’s drones can photograph images of objects as small as five centimetres, such as vegetation, which can help prospectors identify soil type. They can also capture historical information on the property, including past work like bush grids, old mineshafts, or recent activities that might not even be recorded yet on Google Earth, be it logging or First Nations activities. “Not only do you see detail, you’re also getting precise coordinates” from a GPS tracker within the drone, explains Cool. “So you can then send guys on the ground with a GPS to locate a particular feature.”

Yukon-based GroundTruth Exploration acquired its first drone in 2012 specifically to produce high-resolution imagery. With 600 flights now under its belt, the company has discovered many other applications for the new technology.

“The drone also produces very detailed and precise high-resolution elevation models, especially for remote places,” says GroundTruth president Isaac Fage. “It far exceeds National Topographic Database elevation models. Once you start focusing on a more discrete area in the range of say a couple of square kilometres, an elevation model based on the National Topographic data is no longer accurate, as it’s quite coarse so there’s not a lot of detail. If you’re doing things like putting subsurface geophysics in a 3D model with drill holes, you get drill holes sticking out in space in the model. You can’t build a good picture if you don’t have detailed topographic data to begin with. A typical ground resolution is between four to 10 centimetres per pixel in a drone elevation model, whereas with the freely available one, the best you can do is 30 metres per pixel.” 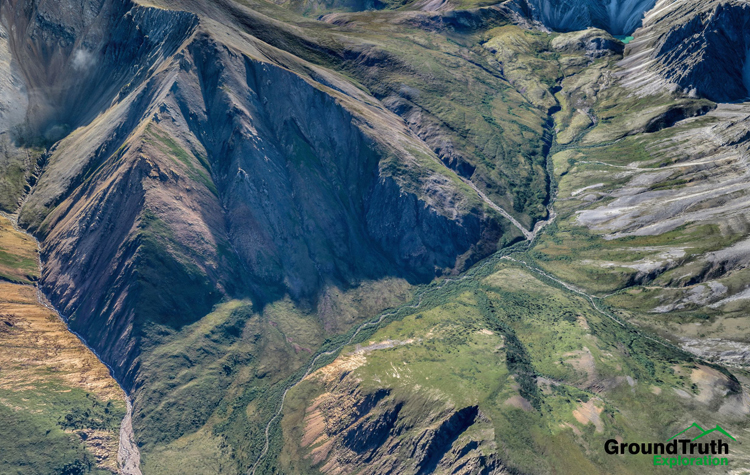 Operators can equip drones with digital cameras that take hundreds of close-up photographs that the drone manufacturer's software then converts into high-resolution 3D imagery. Courtesy of GroundTruth Exploration

As a senior manager of mine planning for Imerys, an industrial mineral production and processing company, David Marek manages various mine sites around North America. One of them is Imerys’ phlogopite mica mine in Suzor Township, Quebec, 300 kilometres north of Montreal, which is only mined about every three years. Last summer happened to be one such year, so Marek needed to survey the property. When he heard of Cool’s new drone business, he was curious about the technology and invited the surveyor up to do a trial run. “It was so low cost I thought it was worth a try,” he says.

Imerys brought in a team with a GPS to verify Cool’s results. “He produced a photomosaic of the whole mine site and, at the same time, he generated a contour plan for the whole operation,” says Marek. “He was done in a day so it took him longer to get to the site than to generate the survey.”

Cool’s second job for Imerys involved calculating the volumes of stockpiles at its Timmins mine – another increasingly popular use of drones. “This would have been previously done by a surveyor, so it takes a lot of time and the safety is problematic,” says Sebastien Long, sales manager at Canadian drone operator Flyterra. “Everything needs to be stopped when the surveyor is doing the work but when we go in no one has to stop their work. A typical job for us is less than an hour whereas a surveyor might take at least half a day to do the same.”

For years, Quebec-based Polycor used satellite and aerial images for planning its roughly 30 quarries that produce a wide selection of natural stone products. In 2013, however, Eric Mayer, the company’s director of operations, decided to give drones a shot. He hired Long.

“A drone is not just much lower cost, it’s also far more accurate,” he says. “It helped me measure as close as one inch. So I can plan far more accurately using its 3D image. A large quarry is so large that you can’t see the entire area. But the drone image gives us the ability to have the entire quarry in front of us in 3D while we’re in my office, making it possible for us to make the best decisions.”

Not surprisingly, Dionne says mining companies interested in purchasing their own UAV – which can cost between $25,000 and $120,000 – generally want to use it for mine planning. “I have one client that wants to fly a UAV at least twice a week to measure and compare stockpile volumes. I also have other units going up north to open pit mines to be used either on a quarterly or monthly basis just to make sure their planning is on time and their blasting makes sense,” he says. “Owning the equipment gives you the control over your data collection schedules; you fly when you need it, which is a huge advantage.”

The small drones used for the mining industry run on rechargeable lithium-ion polymer batteries. Depending on the size of the drone, they can last from 20 minutes to four or more hours in the air. Before a flight, drones are programmed for each route and then hand-thrown into the air to fly and land autonomously. While flying, they are monitored from the ground by an operator via a laptop who can communicate with them and bring them back at any time if they get into trouble.

“When you plan a drone survey, you want to be in the centre of the area so you don’t spend the 40 minutes going to and from a launch site,” says Fage, adding drones can’t be used to cover vast areas. “Our drone can produce up to 40 square kilometres of highly detailed imagery per day. We have eight batteries, so the drone goes out for 40 minutes, comes back, we change the battery and send it out again. That’s how we image a large area, by throwing it up again and again. We also take a portable charger and by the time we’ve used the last battery, the first one is charged, so it’s never an issue.” 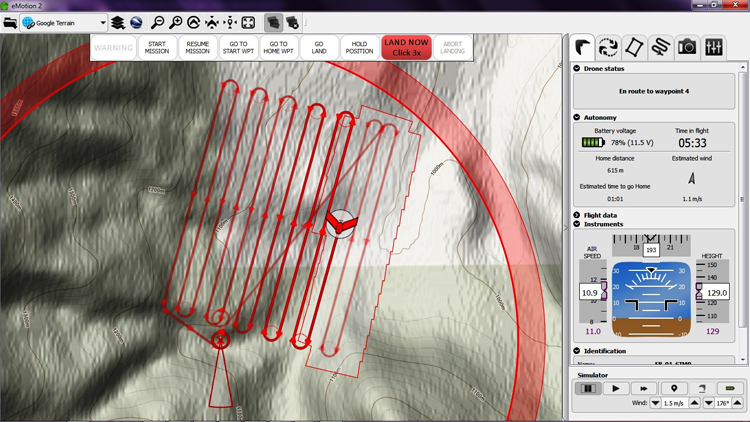 Before flight, operators program the drone's route and then hand-throw it in the air. While the drone is in the air, the user can monitor it via a laptop. Courtesy of GroundTruth Exploration

Change is in the air

Transport Canada does have regulations on drones, which it is loosening over time. Under the current rules, drone operators need to be trained in Canadian Aviation Regulations rules and require the equivalent of a private pilot’s licence. “The manufacturer may or may not provide the training,” says Dionne. “In our case we provide a day for the UAV unit and software plus two days with a certified flight instructor (CFI) to cover the minimal requirements for UAV pilots operating [drones] less than 25 kilograms. We ensure future pilots are operating comfortably within the rules set out by Transport Canada.”

Without applying for an exemption, Transport Canada does not allow drones to be flown within nine km of an airport, heliport or aerodrome. It also forbids operators from flying UAVs more than 90 metres above the ground or out of the line of sight of the user. At the end of December, Transport Canada relaxed some regulations for drones weighing less than 2.1 kilograms by cutting its requirement for a Special Flight Operations Certificate and detailed information for each flight.

Besides regulations, the only other significant restriction drones face is the weather. High winds pose a problem for lighter UAVs, but they can typically fly in winds up to about 45 km per hour and temperatures above minus 15 or minus 20 degrees Celsius. “Most days the weather is not a problem,” says Long.

As drones become more prevalent in the mining industry, innovative new uses for them are inevitable. Fage says he believes, for example, that because drone imagery is so detailed it could be used as a trust-building tool when dealing with environmental or First Nations groups by creating time-stamped 3D images of the land pre-development right through to post-development.

Whether companies hire a drone consultant or purchase their own equipment, drones seem to be one of those rare products where cost savings and higher quality information go hand in hand. Yet they are still one of the best kept secrets in the industry.

“I work for a pretty large company and have been in the business for more than 30 years and until July, I had never heard about using drones for mining,” says Marek, who is eager to spread the word. This coming March, he will be presenting a seminar on drone surveys at one of his company’s conferences, hoping his American colleagues will lobby to have drone use allowed in their country.

“I think it’s going to catch on pretty quickly,” he says. “Any remote site I have, I’m definitely going to use a drone survey.”