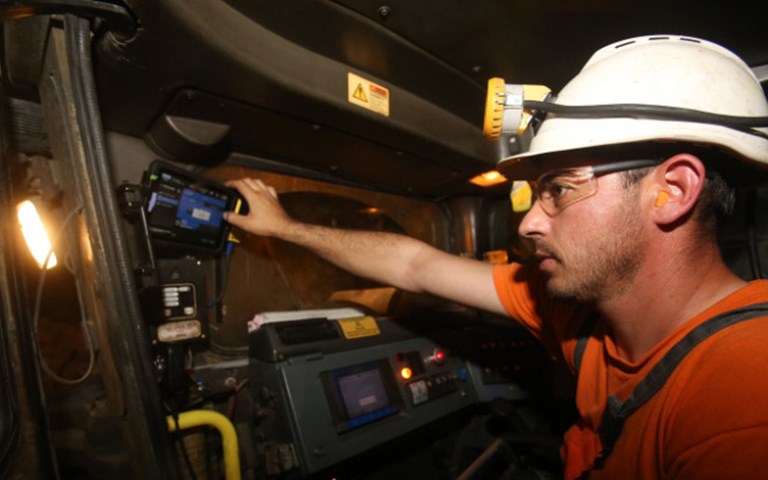 A WiFi-connected tablet installed and in use at Dundee Precious Metals' Chelopech mine. Courtesy of Lumens Group

In its 2017 Tracking the Trends report, Deloitte identified what it called a “digital revolution” as one of this year’s top ten trends for mining companies. “As mines embrace digital, their core processes will become fully integrated, autonomous, remote and automated,” the report said.

This vision relies on a communications infrastructure that can support data-heavy technologies. The traditional leaky feeder systems found in underground mines are giving way to Wi-Fi networks designed for autonomous equipment and extensive real-time monitoring. Although the new communications infrastructure is largely based on technologies proven in other industries, mining companies and their suppliers have come up with new solutions to the specific problems of running high-tech underground operations safely and affordably.

Barrick Gold’s Hemlo operations have been using Sandvik autonomous haul trucks at the Williams mine for the last ten years. Patrick Marshall, senior production systems engineer at Barrick Hemlo, said that the existing leaky feeder radio system was unsuitable for automation. “Leaky feeder supports neither the bandwidth nor latency for automation,” he said. “So to service the haul trucks, we had fibre optic cable run down our shaft and broken out on the level that the automated trucks run on. There are Wi-Fi network access points throughout the haulage drift and in the cutouts for loading and dumping.”

Each of Sandvik’s autonomous vehicles requires around 10 Mbps of bandwidth. “What consumes bandwidth is video feed,” said Marshall. “So the more angles of view that you desire, the more bandwidth you consume. We have two video views on board the truck, plus additional fixed-point cameras all through the automation zone, so that you can see key infrastructure points and passing points.”

Because most mine sites are currently running only a few pieces of automated equipment, bandwidth is unlikely to be a limiting factor on modern networks with gigabit-level fibre backbones. Marshall thought that efficient compression of the video feed could also help reduce bandwidth use if necessary.

Where direct communications between vehicle and surface servers are concerned, latency (delay in data transfer) is more important than bandwidth. Marshall explained that the Profinet communications protocol is used between key infrastructure such as the automated equipment, safety gates, e-stops and the system server to allow the high-speed transfer of data. Therefore network switches and Wi-Fi access points that are compatible with the Profinet protocol must be used in most automation installations. He said the Sandvik system is “basically designed so that if it at any point feels that it has lost communication for a substantial amount of time – and we’re talking in a matter of milliseconds, less than 10 – it will come to a stop and shut down as a safety precaution.”

The vehicle must also migrate seamlessly from one access point to another. As the onboard Wi-Fi antenna comes within range of a new access point, it needs to be able to handshake with that access point, go through its security protocols for connecting, and disconnect from its previous access point. “When this first went in nine to 10 years ago, there was difficulty with getting that connection from one access point to the next,” said Marshall. “If this is not seamless, you cannot control critical systems such as navigation, speed, steering, brakes and emergency stop.”

Sandvik solved this problem by working with networking firm Moxa to develop a feature called “turbo roaming” that makes rapid handovers possible. Mikko Koivunen, automation business line manager at Sandvik Mining & Rock Technology, said Sandvik offers customers the option of using its Wi-Fi system, which is based on standard protocols but employs such features to ensure it will work with automated equipment.

Other network providers have similar solutions. Alex Smith, account manager at Cisco, said his company has just developed a new parallel redundancy protocol to reduce dropped signals and keep handovers smooth: “As the access point that the [vehicle Wi-Fi radio] is leaving is getting dimmer and dimmer, and another access point is getting stronger and stronger, it is sending a redundant signal to both access points, and it will continue to do that along its path. So it’s pretty well impossible to lose a signal.” The protocol also sends duplicate packets to the same access point when only one is in range, improving the reliability of the connection.

Autonomous equipment underground typically operates in isolated areas with dedicated Wi-Fi networks. Ideally, a communications installation could be tailored to the ephemeral nature of mine workings, with no unnecessarily permanent infrastructure. The Williams mine is currently commissioning an Atlas Copco ST14 autonomous Scooptram; unlike the fixed-circuit trucks, scoops follow production activities as they move around the mine, and the network sometimes has to move as well.

To minimize fixed infrastructure, Barrick is experimenting with a mesh network, in which a series of routers pass Wi-Fi signals from one to another, allowing wireless coverage to extend well beyond the fibre installation. “We’ve pre-hung power cables throughout our mining levels, and we can locate those meshing access points on an as-needed basis throughout the level,” said Marshall. “They will daisy-chain to each other to transmit a Wi-Fi message back to the primary access point at the local entrance, which is hard-wired into the switch.”

Mesh networks – and robust connectivity underground, more generally – are not just for automation. Long-established communications provider Mine Site Technologies recently introduced a battery-powered meshing device called the Wireless Repeater Node (WRN). Affixed to walls or equipment, the WRN maintains Wi-Fi coverage and serves as a position reference point for tags in underground tracking applications. Denis Kent, international business manager at Mine Site Technologies, said that spacing the WRNs at about 400 to 500 metres apart would keep their bandwidth above 5 Mbps.

According to Kent, Mine Site Technologies identified equipment monitoring as an emerging area in 2005. “We could see the bandwidth of traditional leaky feeder radio systems was just not able to support video, tracking systems, gas and equipment sensors, et cetera,” said Kent. “Now, with the much talked-about Internet of Things, these sensors are becoming even more available and in greater quantities, so a way to link to them and deliver their data to where it can be analyzed and used is even more critical.”

Smith said that Cisco’s mining customers typically develop a business case for one new application and upgrade their network infrastructure to serve that use. He suggested that mines should anticipate the future and base their new networks on open standards. “It’s making life easier in the second, third, fourth, fifth application,” he said. “If it’s based on open standards, then the need to rebuild the network down the road will be greatly diminished.”

These days, that should not be an issue at the network level. “There are still vendors who prefer proprietary because they feel that it’s better for business if they have a lock in,” said Smith. “But for the most part, the communications industry has figured out that an explosion of growth can only occur if everything can talk to everything else. Ethernet and Wi-Fi are very open standards. What you’re putting on top of them tends to get more proprietary.”

Where automation is concerned, it is unclear whether systems will ever be able to integrate. Barrick has a long-term goal of working with equipment vendors to integrate brands within the same zone. “So one day an automated Atlas Copco Scooptram might load an automated Caterpillar truck,” said Marshall, “and that Caterpillar truck could feed ore to orepasses and down to Sandvik automation trucks, while communicating with automated rockbreakers and other fixed plants, all providing a seamless integration across multiple automation systems and multiple vendors. That would be a great long-term goal.” Fred Delabbio, director of Strategy Focused Innovation and previously underground innovation general manager at Rio Tinto agreed having the ability to combine automation products has been the goal of various companies for many years. That was the impetus for the International Rock Excavation Data Exchange Standard (IREDES), a standardized approach to having mining equipment and underground systems communicate. “Having been involved in many automation projects since the early 1990s, besides the bandwidth and latency issues that are always a constraint, there are many fundamental challenges that hopefully can be converted into opportunities as we utilize the ‘plug & play’ approach from other industries,” said Delabbio. “These opportunities include: increased open systems from equipment and system providers, reducing the complexities of having a mixed fleet of equipment on the same system, reducing production risks associated with upgrading automation software versions, and reducing the impediments to changing out technologies that are not sufficiently supported or lacking capabilities based on future operational needs.”

Despite a recent surge of interest in advanced communications, mining companies may still have difficulty justifying the cost of upgrading their networks. Dundee Precious Metals (DPM) set an example for other relatively small mining companies when it implemented real-time monitoring of equipment and employees throughout its underground Chelopech mine in Bulgaria. Shift workers underground use Wi-Fi-connected tablets to stay in constant communication with their supervisors, who track progress toward short-term production goals and use that information to issue instructions. This meant DPM had to build a robust communications infrastructure that could extend into every corner of the mine.

“There are only a handful of companies that can afford that type of technology,” said Mark Gelsomini, corporate director of information technologies at DPM. But his company did it anyway – by purchasing off-the-shelf network hardware and mobile communications equipment intended for less harsh environments, then ruggedizing that equipment with self-designed covers and enclosures. The guts of its wireless access points are Cisco products made for office environments.

In 2016, DPM created a spinoff firm, Terrative Digital Solutions, to sell its solutions to other mining companies with similar ambitions. Gelsomini said that Terrative had already found customers.

Terrative hired consultant Joe Gladu to help bring its products to market. Having spent the last eleven years selling communications technology to mining companies, Gladu said he expects the small pool of technology providers to grow and become more competitive. “We’re going to see a tremendous movement in the adoption of Wi-Fi solutions over the next coming years,” he said. “This year, it’s just really taking off, and there’s a lot of interest. That, to me, is going to drive the price down.”