The development of a technology to assess the risk of self-heating sulfides
By Alexandra Lopez-Pacheco
October 29, 2018 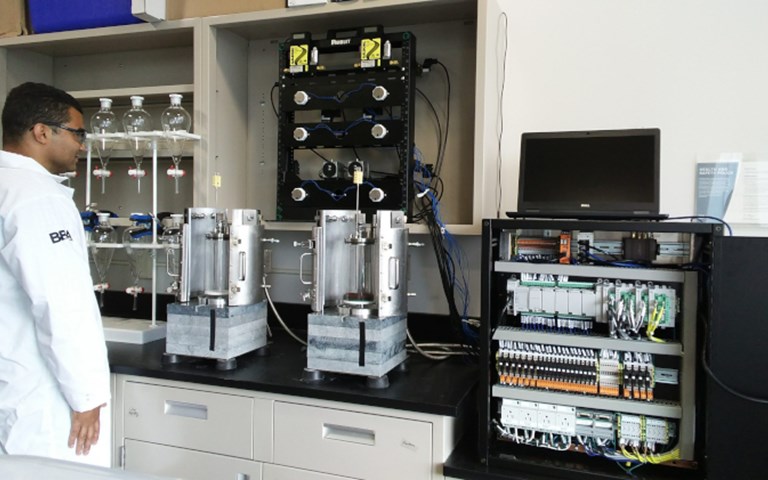 Over the last 15 years, many of the world’s major mining companies have turned to scientists Frank Rosenblum and Jan Nesset and a technology used for research in a lab at McGill University to help them understand a rarely discussed issue: self-heating sulfide material. According to Colin Hardie, director of mining and process studies at Canadian engineering firm BBA, companies often reach out to Rosenblum and Nesset when a fire has unexpectedly broken out somewhere in their operation and they are not sure what has caused it or how to prevent it from recurring. Scratching their heads, alarmed and confused, they ask around and inevitably someone tells them about Rosenblum and Nesset, whose McGill lab houses the FR-2, the world’s only apparatus specifically designed to test sulfides for self-heating properties.

Now, Rosenblum, who invented the technology in the 1970s, and Nesset have decided to pass the baton to BBA. They also want the mining industry to start discussing the reality and risks of self-heating sulfides more openly and proactively, rather than dealing with it by quietly putting out fires.

“These fires sneak up on you. You don’t see anything, and then the fires start,” said Rosenblum. “Fires have been reported in the literature for a very long time, as far back as the Sullivan mine in British Columbia in the 1920s.”

However, there have been many more fires than those reported. Rosenblum and Nesset have done more than 1,000 tests over the years for clients dealing with this problem.

“Most mining companies don’t advertise this issue or publish papers on it,” said Nesset. “But they come to us. Usually, their first reaction is ‘What the heck is going on?’ They don’t understand it. But once you understand it and the science behind it, there’s a chance to engineer your way around it and it’s not such a big issue anymore.”

When minerals typically associated with sulfides — such as iron, copper, nickel, lead, cobalt, silver and zinc — are dug up, fires can break out wherever the material is collected, whether in stopes on a mine site, stockpiles, the processing plant, tailings ponds or waste rock, as well as on the ships and trains that transport concentrate. It does not happen often, but when it does, it comes with the potential for catastrophic consequences, including loss of life.

Two of the most notable examples of recorded fires are the 1939 fiery sinking of the N.Y.K. Liner S/S Bokuyo Maru due to self-heating copper concentrate, and fires in the mid-1970s and ‘80s at stopes in then Noranda’s Brunswick zinc mine, located near Bathurst, New Brunswick, resulting from the use of self-heating waste rock as mine backfill. In fact, it was the Noranda fires that sparked the beginning of Rosenblum’s career as a specialist in the field and the invention of the self-heating measurement technology.

In 1975, as the stopes of the Brunswick mine were burning and generating sulfur dioxide gas, Rosenblum was a researcher at the Noranda Technology Centre in Quebec. Klaus      Konigsmann, the company’s chief metallurgist, asked Rosenblum and fellow researcher Paul Spira to develop a test to measure the self-heating properties of sulfide material. The hope was that Noranda would be able to take the unpredictability of self-heating sulfides out of the equation and develop preventive solutions.

“When we started, we had no concept of what was going on with the material,” said Rosenblum. The two researchers set out to unravel the mysteries of self-heating sulfides. They discovered it was a very complex puzzle.

“It turns out there are different exothermic mechanisms at play at different temperatures,” said Rosenblum. “Below 100 C and in the presence of moisture and oxygen or air, there are a series of reactions that cause the heating, which we have termed Stage A. When the moisture evaporates at around 100 C and the temperature continues to rises toward 380 C, there is another mechanism which we have termed Stage B.” The formation of elemental sulfur in Stage A becomes the fuel that burns to produce sulfur dioxide gas in Stage B.

“The problem is that self-heating of sulfides is a process that evolves,” said Rosenblum. “It may start with material that doesn’t heat and then with time and the right conditions, oxidation and subsequent heating start. It’s a moving target. Some material will heat and some will not and some will not heat when it’s fresh but will with a little time and oxidation.”

“We now have a pretty good understanding of the mineralogical basis behind the reactions,” said Nesset, “and can often predict the heating behaviour based on the mineralogy of these sulfide mixtures.”

The technology Rosenblum invented in the late 1970s, working first with Spira, and then with Nesset starting in the 1990s, focused on measuring that moving target, which differentiates it from other general self-heating materials tests that typically involve only one stage and were not designed specifically for sulfides. Such tests can produce false negative results and therefore increased transportation and storage risks.

Instead, the FR-2 apparatus subjects the sulfide sample to a two-stage test at the different temperatures, essentially exposing it to an accelerated version of the weathering period that plays such a critical role in self-heating. Throughout, the sample’s self-heating rate is measured.

When Noranda shut down its Montreal technology research centre in 2003, the FR-2, Rosenblum and Nesset, now an industry consultant and adjunct professor at McGill, relocated to that university’s department of mining and materials engineering. There, Rosenblum continued researching self-heating sulfides, working with graduate students and other McGill researchers to improve the technology. Meanwhile, miners dealing with self-heating sulfides continued calling and asking for help.

The demand for self-heating tests has continued to grow across the world. Three years ago, Rosenblum and Nesset decided it was time to transfer the technology to an engineering firm that could provide both the testing and the engineered solutions to clients. They selected BBA to carry on with the technology. BBA has since built a lab at McMaster University’s Innovation Park in Hamilton that will provide this and other testing services.

The firm will be using next generation technology of the FR-2 apparatus with increased automation and improved efficiencies. With today’s technology, BBA can monitor the FR-2 testing remotely, 24/7. “The tests are easier to do and will require smaller quantities of material, which reduces costs for the client,” said Hardie, who first benefited from  Rosenblum and Nesset’s expertise  as one of their clients when he was working for Falconbridge’s Raglan mine and the company was dealing with self-heating sulfides.

“If a client’s test results indicate that there is a potential risk for self-heating, within BBA we have all the engineering expertise in place to develop better designs, operating procedures and HSE plans for all areas of a mining operation,” said Hardie. That applies not only to existing mining operations but also for new projects under development.

Related: Some miners are turning to dedicated test sites to alleviate the risks that come from trialling new tech and processes

Depending on the situation, said Lou Bruno, a material handling specialist and BBA’s executive director for Central Canada Operations, there are various options to prevent self-heating sulfides from bursting into flames. These include drying the material to near zero moisture, sealing it with a blanket of inert gas, chemical treatment, compaction to starve it of oxygen, or incorporating self-cleaning features in the design of processing and handling equipment. “The material should always be visible and moving and not allowed to remain at rest for extended periods of time,” said Bruno. “That’s when it can ignite.”

Facilities can also be designed or retrofitted to prevent self-heating dust from accumulating on any surface, including minimizing flat ledges. “In addition, lighting and instrumentation fixtures can get hot, so you need to also limit the surface temperature on such equipment,” said Bruno.

Rosenblum will continue researching at McGill while working closely with BBA. Nesset has agreed to continue assisting BBA with assessing results and promoting the technology. “We want to be up to date on the latest research in the field so we can help our clients implement the best solutions,” said Hardie.

Rosenblum and Nesset’s goal is that the mining industry increases its awareness of the realities and risks of self-heating sulfides and becomes more proactive. “If self-heating sulfides were to cause a significant fire or sulfur dioxide incident near a populated area, a lot of the mining industry would be affected and the regulators could impose unnecessarily stringent conditions,” said Nesset. “We want to be able to stay ahead of the curve in terms of regulation. We want to have the answers and solutions before there are any major incidents.”