Invention born of necessityEngineer Theresa Nyabeze takes a do-it-yourself approach to diversity. Part of our We Are Mining series

Engineer Theresa Nyabeze takes a do-it-yourself approach to diversity. Part of our We Are Mining series
Renee Sylvestre-Williams
April 30, 2018 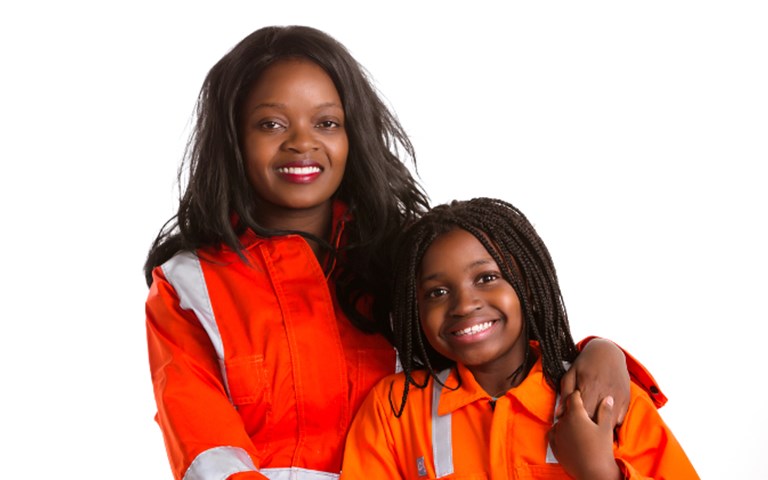 How you do become a role model for gender and racial diversity in mining? For Theresa Nyabeze, you conjure up a story to occupy four children on a road trip from Sudbury to Ottawa.

“They just started to razz each other,” said Nyabeze, 39, a professional mining engineer who works as a frontline supervisor for Vale and is the CEO of Diversity STEM. “So I said, ‘You know what? Here's a notebook. I'm going to dictate a book, and you're going to write.’” That first draft has now become, Nyabeze’s self-published book, Underground! My Mining Adventure, the story of Maiya, a young girl who explores the world of mining with her mother. Throughout the story, Maiya sees the diverse people and technology that make up Canadian mining.

It was when Nyabeze compared the ear-popping effects of going down a mine to that of a plane taking off or landing that she realized she had something. “My little nephew, who was visiting from the UK, had just experienced that. It came to me that, oh my god, this is an opportunity for engagement right here with youth!”

Nyabeze, who emigrated from Zimbabwe when she was 12, had initially planned on studying medicine when she started attending Laurentian University. That is, until she took her first university-level biology class. “I used to sit next to this amazingly talented girl and she was so passionate about biology that, in that instant, I knew that I didn't have a passion for it.” Instead, she looked for something else and discovered mining engineering; it did not require any biology and her older brother Charles was already working in the industry.

While doing her degree, she noticed a lack of mentors, especially those who looked like her. “When you're in your own home country, it's very easy to find role models. You find people who look like you,” she said. “I didn't know it was a gap until I was taking mining engineering and I was seeing classmates who seemed to have more direction than me. I just felt that some of them seemed more networked and more mentored than I felt.”

One of her professors invited a women in science and engineering group to talk to Nyabeze’s class and it was there she found her role model and mentor, Samantha Espley, now a general manager at Vale Base Metals, and decided to stay in engineering. Espley hired Nyabeze when she was still a student. “She’s super smart, had lots of energy and when we had the ability to hire, we hired her,” she said

Women are still underrepresented in the mining industry, but Nyabeze did not feel hindered when she began her career. “I've always had this thing that if somebody appears to not like me, I've always really relegated it to ‘Maybe they're having a bad day,’” she said. “I found what was challenging was more around being accepted as a young engineer in general.”

Now she admits that her original outlook might have been naive and experiences have since revealed the biases toward gender and race that she and others must contend with. One such moment was being the only immigrant and often the only woman of colour in the room. Another was when she had her children and they would experience things in school that were not inclusive. “I started to really open my eyes around diversity. Are you really included, or are you just present?”

That inspired her to advocate for more diverse workforces. “For me, it goes even to design. If you're designing things, if you're creating systems, are you being inclusive of different viewpoints?”

She also wants to encourage more young people, especially girls, to consider mining as a career.

“I think my enjoyment of my industry makes me, a little bit selfishly, want others to participate in it,” Nyabeze said. “I can see how your deeply seated stereotypes for an industry are hard to undo once you're an adult. So we have to start our kids young understanding the opportunities for them that exist in mining, or even science, technology, engineering and mathematics, so they can make it part of their opportunity bank.” When she gives talks based on her book, she said she can already see more girls considering mining as a viable career option.

Nyabeze is happy to take on the title of role model. “I embrace the responsibility that I carry when I enter a room and I am different, because for some people, I'm their first experience of a person of colour. How they experience me is going to frame how they, in the future, embrace or include or promote people who look like me. I think it's just realistic to understand that I carry that, and that's life.” Unconscious bias exists, said Nyabeze, and instead of denying it we should recognize it and talk about it.

While Nyabeze is doing her part to change the traditional face of mining, she has suggestions for industry leaders, “Let's engage. Look in the room. What are you seeing in your room? What's the diversity? Are [people from different backgrounds] being included and how do you use your position to further that dialogue?”