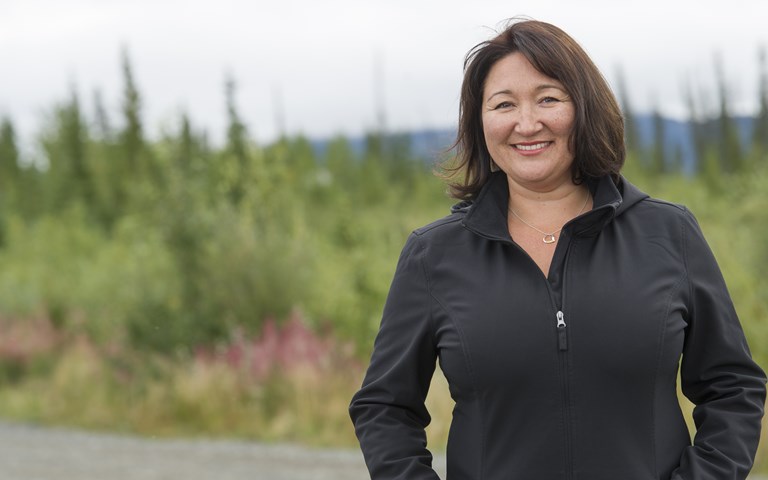 In February 2015, the Kluane First Nation (KFN) of Burwish Landing in southwestern Yukon signed a $583,000 agreement with the territorial department of Energy, Mines and Resources to collect geophysical data on the Nation’s traditional territories. The partnership, facilitated by Chief Mathieya Alatini and Yukon Minister of Energy, Mines and Resources Scott Kent, was exciting for both parties. An airborne survey allowed KFN to discover economic opportunities buried beneath its settlement lands and the Yukon government gained a better understanding of the geology of the region. “It was a win-win,” said Kent. “That’s been my experience of working with Chief Alatini.”

Known for her straightforward approach and diplomatic leadership style, Alatini has taken bold steps to inject opportunities for independence and prosperity into her community. When she was first elected chief in 2010, it became clear that Alatini believed that developing a positive and fruitful relationship with the mining sector was an important step toward KFN achieving economic self-sufficiency.

“I certainly appreciate the opportunity to work with her,” Kent said. “She’s a very strong leader for KFN, and the people out there should be proud of her […] for the work that that First Nation has been able to accomplish.”

In 2012, she and her team published the Proponents Engagement Guide following a mining summit KFN convened in early 2011 with representatives from industry, governments and the Yukon Geological Survey. The goal of the guide is to set clear definitions and expectations for any entity wishing to approach KFN about engagement opportunities.

Describing her as “very hands on and eager to learn about the mining industry,” Kent noted that KFN’s Exploration Cooperation & Benefits Agreement with Wellgreen Platinum on its PGM-nickel deposit serves as a prime example of how Alatini is committed to developing economic opportunities within her community.