Stephanie Willerth works hard to achieve her goals and is not shy about her ambitions
By Anne Millar and Mary Wells
January 04, 2018 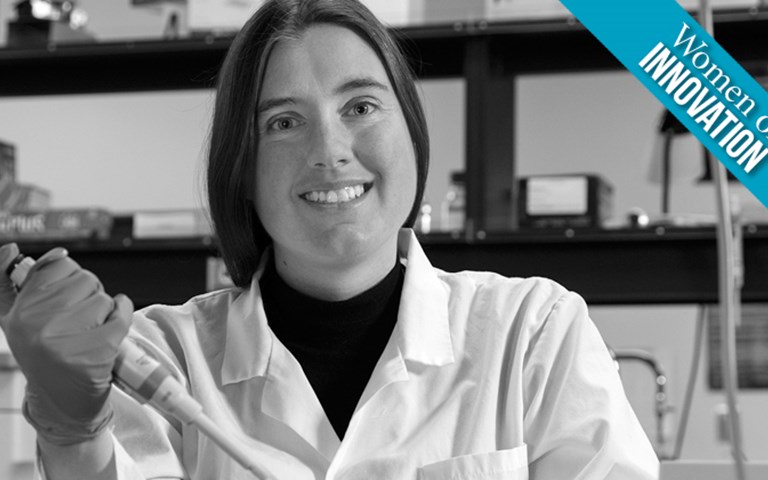 Stephanie Willerth is the Canada Research Chair in biomedical engineering and an associate professor in the Department of Mechanical Engineering and the Division of Medical Sciences at the University of Victoria. She is also the president-elect of the Canadian Biomaterials Society and the acting director of the Centre for Biomedical Research. Her cutting-edge, interdisciplinary research has had a direct and significant impact in the fields of biomaterials, regenerative medicine, and tissue engineering. Stephanie is a member of the Brain Research Centre and the International Collaboration on Repair Discoveries. She has served as an associate editor for the American Journal of Stem Cells since 2012 and published her first book, Engineering Neural Tissue Using Stem Cells, in 2017.

Stephanie also participates in outreach activities that promote women in engineering and impact the wider science community. She gives presentations and lab tours to high school students and has hosted young girls through the Science Ventures program and the Victoria chapter of the Canadian Association for Girls in Science.

Why did you decide to do undergraduate degrees in biology and chemical engineering? I had wanted to be a scientist since I was five. If it had been possible, I would have been a professor straight out of high school. I knew I always wanted my own lab. Who doesn’t want a lab? It’s just a bigger chemistry set. You can answer all the questions you want the answers to. I really wanted to major in biology, so I applied to MIT because it’s the best private school for biology in the U.S., and I applied to the University of California, San Diego because that was the best public school. Then, I ended up getting into both.

During my second year at MIT, I started working in a bioengineering lab. I really liked what they were doing and decided lab work was what I wanted to do. I actually wanted to run my own lab, but to do that, you have to do lab work. The lab I worked in wasn’t just bioengineering, we had people from all over. We had doctors of medicine, Ph.D. students, and I could talk to everyone. I think that’s actually something really good for undergraduates to do, regardless of whether they’re science or engineering majors — to work in a lab — especially if somebody will allow you to see what these people do. That’s why I think my lab is a good opportunity for people. If students aren’t sure whether they want to go to grad school or medical school, this experience can help clarify that decision.

At the time, bioengineering wasn’t an undergraduate major, it was just a grad program. It seemed like the most logical thing then would be to couple biology with chemical engineering. It seemed like there was a real need for engineering approaches to some of the biology problems, where we could start quantifying things. That’s what the lab I worked in did. For example, proteins have been sequenced for forever – amino acids and things like that – but it was much harder to do that for sugars. The person I worked for was developing the code for how to identify sugars. I thought, “That’s really applying this engineering approach to this biological problem.” I like to work on the intersections of different things.

What factors do you believe have led to your success? I am not a professor by accident. I worked really hard. I planned out my career moves strategically to give me the life I want and to allow me to do the things I want. I think we teach women to hide their ambition. I also think you have to have resilience. I’ve gotten better at not taking rejection personally.

What are your current career goals?  We have some cool stuff going on in the lab. One project we have is with Aspect Biosystems where we’re using bioprinters to make 3-D neural tissue. We just got a stem cell network grant to do that. That’s something that I’m really interested in. Then we have this other project where we’re doing cellular reprogramming. We have not really done either of these things in our lab before; sort of new directions post-tenure. We’ve partnered with a local biotech company called iProgen and they made us this transcription factor called ASCL1. If you treat cells, such as your skin cells, with this factor they actually turn into neurons. This is actually a way to do that process of converting cells directly to a different cell type without using any virus.

What advice would you give to young women or young people in general interested in pursuing a career in engineering? We’re bad at marketing, but engineering is a great opportunity. It gives you more options. Very few of the people I graduated with from chemical engineering are actually still traditional chemical engineers. A lot of them went into marketing and business after a few years. It’s actually easier, I think, to go from being an engineer to other fields with your quantitative background than it is to go the other way around.

Is there a person who you find particularly inspirational? One of the people who really intrigues me is Allen Eaves. He developed his own stem cell technologies. He has been able to retain ownership of his company, which does so much good for the scientific community. I really like what he did. I think that women shouldn’t just limit themselves to female role models. You should find someone whose career you like and then model yours on that. He was one of those people. I was like, “Oh, that’s how I would do it.” I don’t want to just start a company to start a company; I would want it to be “the one”. The one person who I think really exemplifies this is Joe DeSimone. Lots of companies have spun out of his academic lab. Then finally this project came along and he went, “Yes. This is the one I want to do.” He took time off to do it. I think it really paid off for him that he waited until he had the one he felt really passionate about.

Why do you believe women continue to be underrepresented in engineering and how can we increase their participation? I think it has to do with a lot of the stereotypes, the image of engineers as old, white men. I think we need to do more promotion, tell students what engineers do, and get to them younger. High school students at least take science — chemistry and biology — so they know what that is, but nobody takes engineering in high school. I don’t know if I could have defined “engineering” even when I was an undergrad. It is so broad. That is the beauty of engineering but also what makes it difficult to capture it succinctly.

Engineering is also unintentionally inheritable. The biggest indicator of whether or not you will be an engineer is whether you’re related to one. At these events that I talk at, dads bring their sons; it would be great to have moms bring their daughters.

The other thing is that I think you have to put money into fixing it. I told the president of NSERC, “If you really want more women, you should sponsor these women only professorships. You should sponsor undergraduate opportunities specifically for women and for minorities, too, if you want more diversity.” I was at a meeting and we were talking about how to get more Indigenous people involved in research. I said, “If you really want to get more Indigenous people involved you should give every undergraduate Indigenous student in science and engineering an undergraduate student research award.” For any minority population, do that. Get them exposed to it.

Academia is so slow to change. There are so few tenured positions. It’s hard to change the face of it. I think biomedical engineering (BME), because it’s a newer field, is more progressive. BME leaders, definitely in the U.S., are very aggressive about expanding. They recruit women because they know this diversity is going to strengthen them and make them more attractive and help recruit a more diverse student population. If women see it is a high value program, they’re more likely to go there. In BME at UVic, we have increased the number of female applicants by something like 400 per cent. BME is close to 50-50. The number of women in faculty went up by 200 per cent. I think it’s made it nicer. I think you can get into problems if there is just one woman and you’re supposed to be the representative of all women or all minorities. When you have a critical mass, you’re seen as an individual and not as a representative.

How do you define innovation? I think innovation reflects a willingness to try, to apply new ideas to different fields, and to think outside the box. I would say a willingness to try new things and fail but you should also have some guidance before going into it. I think Grand Challenges Canada has a good model. For example, I got funding from them because we applied some of our drug delivery technology, which had been used for tissue engineering, to water quality. We had an existing solution that could work elsewhere. The idea came from a solid, scientific standpoint initially and then we applied it to other problems. I think that’s a more reasonable way to be innovative. You need to start from a solid perspective in some field before going off into other things.

Do you define yourself as an innovator? I’ve gotten awards that have called me innovative but it’s not how I would describe myself. I think I’m a scientist and an engineer. I’m a problem solver. I’m also a connector. I think I’m a typical middle child, which is possibly why I get pulled into service roles; I want peace and harmony.

How do you strive to be innovative in your lab? I give my students some leeway to do experiments. I was running a group meeting once and they were making different stiffnesses of gels and testing them. I was like, “Why did you do that?” They said, “We just wanted to know what would happen.” I said, “I guess that’s a good reason to be doing experiments.” I think there should be some of that. I really think you need more curiosity-driven research and then innovation will just happen.

Do you think women bring a unique perspective or set of skills to engineering and innovation? Your background has an influence. How I think about problems, how I approach innovation, how I approach my lab comes from how I was raised, the environment that I grew up in, my culture, what I’ve been exposed to. I knew plenty of people who grew up playing football, so they were interested in concussion research. I think people bring these different perspectives. I think that’s why you can get innovation from diversity.

To read more about Stephanie and the other Women of Innovation, purchase the book here.

Next: "We engineer for everyone, so engineering should be for everyone"
Amanda Kalhous says diversity of thought is key for innovation and engineering