This year marks the 40th anniversary of the Elliot Lake wildcat walkout
By Alexandra Lopez-Pacheco
January 01, 2014 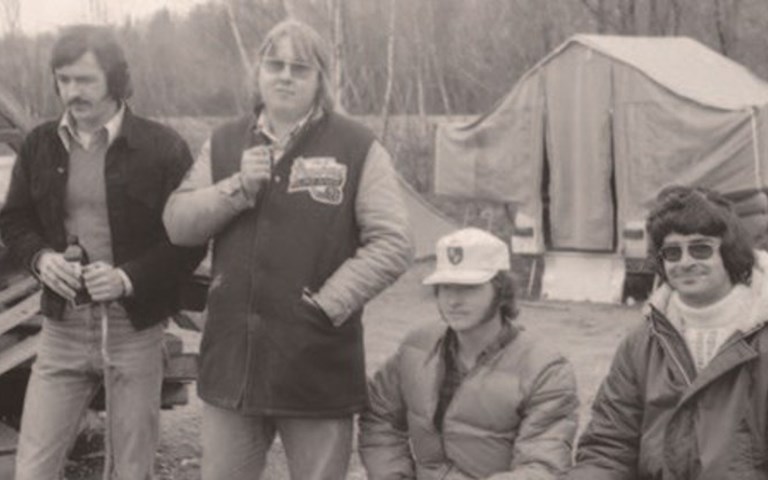 Ontario government representatives 40 years ago presented research linking radiation to lung cancer at a conference in Paris, France. In the audience were several members of the United Steelworkers of America (USW), whose organization had been fighting the mining industry and the Ontario government for improved health and safety at the Denison and Rio Algom uranium mines in Elliot Lake, Ontario. In addition to a high incidence of injuries, hundreds of miners were ill or dying from silicosis and lung cancer, which the union believed was caused by silica dust. The union representatives were shocked to discover the government had found there was another cause behind the high rates of lung cancer – radiation – and had not bothered to inform miners or to take any action to protect them. The USW members shared the news with their co-workers back in Elliot Lake, and this proved to be the last straw. On April 18, 1974, about 1,000 miners from Denison went on a three-week wildcat strike.

“I think the conference, combined with the general dissatisfaction with the occupational health and safety regulations and laws in the province at that time, caused the strike,” says Fergus Kerr, now vice-president of operations at Global Atomic Fuels Corp., who joined Denison in 1977 and became its general manager a decade later.

The strike drew the attention of the media, the public and Ontario’s politicians. Mining health and safety suddenly became a hot-button issue.

The response from mining companies is remembered differently, depending on who you speak to. Some recall an industry that embraced change while others are less positive.

“Just around that time, the uranium market improved dramatically,” says Kerr. “So there was pressure from politicians at both a federal and provincial level and pressure from the unions, and the industry realized if they were going to expand their operations, they better do it right. There was a combination of events and circumstances that came together at that time.”

Leo Gerard, USW’s current international president, moved to Elliot Lake shortly after joining the union in 1977, and he sees it slightly differently: “[The mining companies] were brought in kicking and screaming. Eventually, when it became inevitable that there would be changes, toward the end, they came to understand it had to be resolved.”

The birth of modern health and safety regulations

Despite the controversy, there is universal agreement that then Premier William Davis’s decision to launch a royal commission to investigate health and safety in mines was one of the best things to have happened to the province’s mining sector. Chaired by engineering professor James Ham, the Ham Commission came back in 1975 with more than 100 recommendations. This report became the bedrock of the province’s Occupational Health and Safety Act (OHSA), which came into force in the fall of 1979 not just for mining but across all industries.

The OHSA, known as the “green book,” became a trend-setter, Kerr says. It is used by mining operations around the world as a best-in-class guide for worker health and safety to this day.

According to Pakalnis, in the mid-1970s, Ontario’s mining industry had the highest injury rates of all industrial sectors in the province. “Today, mining has one of the lowest rates of injuries,” he points out. But the act also improved productivity, with safety driving many of the technological innovations. “And it all started with a wildcat strike,” Pakalnis says. “It was an illegal strike, but they did the right thing and then the government and industry did the right thing too.”

Ironically, because the federal government deemed uranium, a resource for nuclear energy and weapons, under its jurisdiction, Elliot Lake’s miners were not initially protected under the new act. “It was bureaucratic baloney,” says Gerard. “We fought our way through it and ended up getting a resolution two or three years later. By then, we’d negotiated most of the provisions of the OHSA into the collective agreements at Elliot Lake.”

The next challenge: reducing fatalities

Despite the dramatic decrease in the number of non-fatal injuries, mining fatality rates have not decreased to the same degree over the last few years. While fatality rates are far lower than they were in 1974, over the last five years there has been little movement in the fatality rate, with an average of 5.6 worker deaths a year between traumatic injury and occupational illness-triggered deaths. “We’re scratching our heads as to why this is,” says Kerr. “It’s the same internationally.”

The USW pushed for an inquiry back in 2011 when two men were killed at one of Vale’s Sudbury nickel mines. In February 2013, the Ontario government launched a review of mining safety headed by the Ministry of Labour’s first chief prevention officer, George Gritziotis. “I’m not suggesting that all incidences are not tragic and of concern,” says Gritziotis, “but for me, eliminating the fatalities is at the core of what drives me in this job.”

The review, which included 11 public consultation sessions across Ontario’s mining communities between March and May and considers feedback from the public and the mining industry, “will release deliverables and best practices as we go along,” says Gritziotis. “There may be a regulation that needs to be refreshed.”

Gerard would like to see another inquiry and points to the improvements that resulted from the Ham Commission, the Stevenson Commission in 1986 on ground control and mine rescue, and the Burkett Commission on mine and plant safety in 1982. “Each one of them drove forward some meaningful suggestions and recommendations,” says Gerard. “A review process is a review of things that have already occurred and looking at what transpired. An inquiry gets in-depth into what things were done. If you look back at the history, it’s been some 30 years since the last inquiry.”

While no one yet understands why fatality rates have not budged, much has changed since the health and safety act was introduced. Kerr, who is employer vice-chair of the advisory group to the government’s current review, thinks one of the big challenges today will be the consistency of training as the industry recruits young workers to replace retiring boomers.

“I remember when I was at Elliot Lake,” says Kerr. “Both companies were going through a major expansion. Neither could find miners or tradesmen. We decided if we can’t hire the miners, we’ll make them. They set up what were state-of-the-art facilities at the time for miner and trades training. We were young, having families, developing our skills and knowledge together. I look very fondly on those days. I think that had a huge impact on health and safety, taking a whole new workforce and training them from scratch with best practices.”

Gerard also remembers those days. “We grew up together. We had our issues with the people who ran the smelters and mines, but our kids played hockey together,” he says, adding the sale of many mines to foreign companies has changed that dynamic.