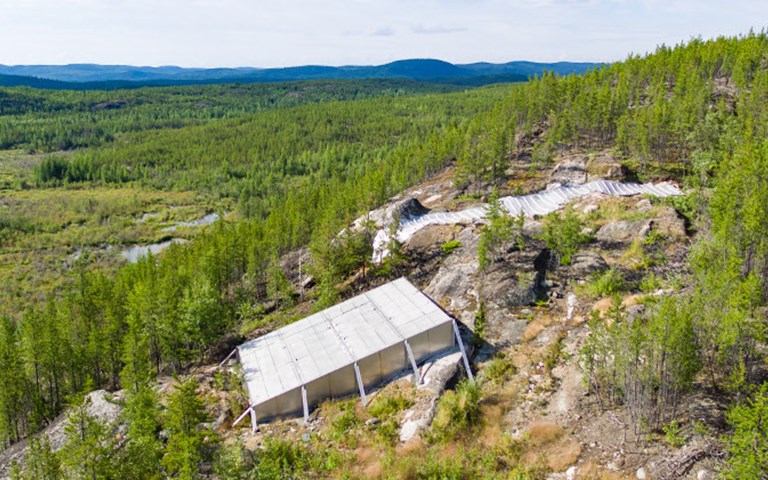 An aerial view of two stainless steel caps at the Rix Leonard legacy mine site. Courtesy of the Saskatchewan Research Council

Operations at the Gunnar uranium mine in northern Saskatchewan stopped abruptly in 1964 with little to no decommissioning. The miners simply stopped work and walked away. Over the previous decade, the open pit and underground workings yielded tonnes of uranium ore that was refined on site and shipped to the United States. When the workers abandoned the site, they left behind an open pit over 100 metres deep, the mill, two acid plants and uranium processing buildings, and over six million tonnes of tailings and waste rock, as well as dozens of portals to underground workings.

Fifty years later, the Saskatchewan Ministry of the Economy launched Project CLEANS (Cleanup of Abandoned Northern Sites) to remediate the Gunnar mine and mill, along with the nearby Lorado mill, which processed uranium from surrounding sites, and 35 smaller satellite mine sites without tailings. The project is cofunded by the provincial and federal governments, which in 2006 hired the Saskatchewan Research Council (SRC) to manage it. One challenge has been finding cost-effective and logistically feasible methods for locating and closing off access to the underground workings, the results of which could become the model for many other such reclamation projects in Canada.

The first step to remediation

The task of mapping the satellite sites fell to geoscientist Patty Ogilvie-Evans. She plays the role of detective on SRC’s Environmental Remediation team, recreating what happened at the old mine sites using a combination of archived files, newspaper reports from the 1950s and 1960s, and historic underground plans, paired with modern technology such as Light Detection and Ranging (LiDAR), to create 3D models of the subsurface.

“It’s important to understand what happened underground, so we can get a better idea of any risks on the surface,” said Ogilvie-Evans. “When you’re working with 35 sites, you come to see that each one has its own story. It’s interesting trying to figure out the intricacies of each site, which vary greatly.”

Once identified, a plan is made to seal each opening, based on its shape, orientation and location. Bulkheads made of high-quality concrete are typically used to close mines in Saskatchewan and are the approved mine closure method prescribed in provincial mine regulations. However, due to the short field season and difficulty of transporting concrete materials and mixing equipment to Gunnar’s remote northern Saskatchewan location, SRC was granted an exception to use alternative materials.

SRC considered aluminum, steel and galvanized steel, but eventually decided on stainless steel covers as the ideal choice, a solution first suggested by Kevin Lewandowski, a local contractor in Uranium City, and previously implemented by the Saskatchewan Ministry of Environment (previously Saskatchewan Northern Affairs) in 2005 at the Cinch Lake/Cenex mine satellite site.

“The use of stainless steel provides a long-term closure solution, reduces the risk to public safety and can be fabricated and then installed at site,” said Ian Wilson, business unit manager in the Environmental Remediation department at SRC. “It is a protected closure to prevent public entrance, either inadvertently or advertently, into the abandoned mines and to also prevent animals from potentially falling in or getting stuck.”

Related: Saskatchewan uranium is poised to help wean the world off its dependency on Chinese heavy rare earth elements thanks to developments from the Saskatchewan Research Council

Stainless steel is durable, cost-effective, relatively easy to transport to site and able to withstand forest fires. SRC estimates the average installed cost of stainless steel caps around Uranium City is about $3,500 per square metre of cap (the cost varies according to the specific site condition). A life-cycle cost analysis carried out by SRC showed that stainless steel caps were less costly than the concrete alternatives. With 25 unique, form-fitted stainless steel caps installed by the CLEANS project so far, SRC has refined the process of assessing, designing, fitting and installing the stainless steel covers.

“First, we remove all the overburden and vegetation and clear the site down to bedrock,” explained David Sanscartier, project engineer for environmental remediation at SRC. “Structural engineers then survey the opening, recording hundreds or thousands of data points around the opening that they use to create a 3D model of the surrounding bedrock topography. Then, they use the model to design the best and closest-fitting cap possible.”

Each cap is like a bridge, Sanscartier said, with supports underneath and plates welded on top. The caps are transported from a fabrication shop in Saskatoon via an ice road, which is only open in March. Each section is two to three metres long, sized to fit on the ice road trucks. Most of the welding occurs in the shop, but on site the sheets are welded to the frame and to each other, and rock-bolts are used to anchor the cap in place.

Stainless steel caps are not suitable for every opening, and SRC has adopted the Utah Natural Resources Backfill Method for 16 satellite sites so far. The method, which uses waste rock to backfill adits, is the ideal option for extremely remote, inaccessible open mine workings on relatively flat ground. However, in one case in which the incline was too great, a boulder closure was required.

“A boulder closure was first used in 2017 at our National Exploration Pat Claim mine site to help us deal with an opening that occurred from the mining of the deposit to surface,” said Ogilvie-Evans. “This stope opening had previously been backfilled but showed signs of slumping over time. In spring 2017, we sent our plans to the regulators for approval to close this opening using large boulders on site to block the opening and to reduce the risk to public safety by preventing access by people or animals.”

At a further eight locations, SRC has used polyurethane foam plugs as a “quick fix” solution to prevent inadvertent access to some underground openings. The foam is easy to use and provides a barrier to temporarily close these risky areas, said Sanscartier. SRC is also currently investigating the use of fencing at certain sites where potentially unstable thin crown pillars – the mass of rock left behind to support the “roof” of the mine – are immediately below the surface.

“We’ve identified areas with thin crown pillars that are at risk of collapse from the 3D models we generated using historical records from the Saskatchewan Mineral Assessment Database and LiDAR surface surveys,” said Ogilvie-Evans. “They may not be openings right now, but in the future, they could collapse.”

Based on the corrosion rate of stainless steel, SRC expects that the stainless steel closures deployed at the sites will last 100 years or more, said Sanscartier, and the waste rock could last hundreds of years. The lifespan of the foam closures is not well understood yet, but based on similar uses in the United States, they could last for 20 to 30 years if covered by dirt and not exposed to the sun or forest fires. The fences will last 25 years or more.

An idea worth spreading

The goal of CLEANS is to reclaim the sites around Uranium City in northern Saskatchewan, with ongoing input from the communities nearby, then hand over monitoring of the reclaimed sites to Saskatchewan’s Institutional Control Program. SRC is sharing what they have learned about using the stainless steel caps with other companies and jurisdictions, and presented the method at the 2015 Mine Closure conference in Vancouver. Neighbouring Cameco has successfully installed 12 stainless steel covers and expects to install another nine caps over the next two years at the decommissioned Beaverlodge properties the company manages on behalf of the federal government.

Following closure of Beaverlodge operations in 1982, historic mine openings were decommissioned and secured with concrete caps. To ensure the decommissioned property remained safe for members of the public for the long term, Cameco evaluated a number of options, including the stainless steel caps that SRC had installed.

“Considering the remoteness of the project, the design life, the installation process and the available local resources, the stainless steel caps turned out to be the ideal solution,” said senior compliance and licensing specialist Shawn Hiller, who leads the Cameco remediation team and works with a Saskatoon engineering firm and local contractor.

SRC also recently assisted the Ontario Ministry of Northern Development and Mining with the procurement process to use stainless steel caps for remote uranium mines in Ontario and are considering using them on other types of mines, due to their durability and resilience.