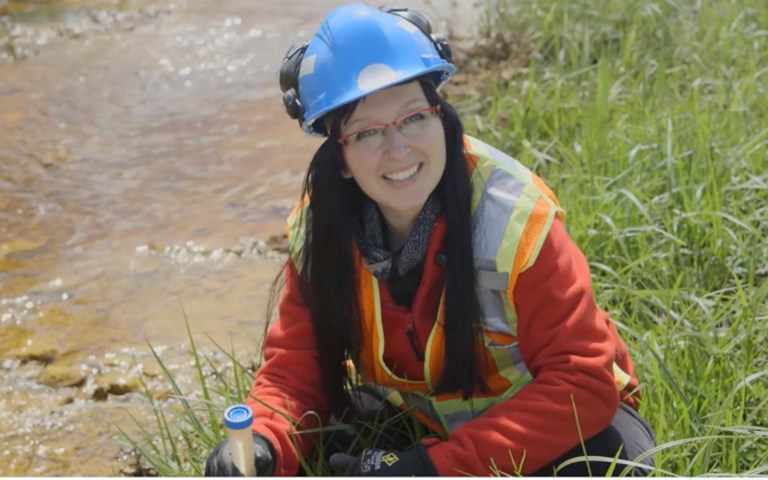 Nadia Mykytczuk, Industrial Research Chair in biomining, bioremediation and science communication at Laurentian University, spends a lot of time studying how micro-organisms like bacteria can be used to extract minerals and re-process legacy mine waste, all of which can reduce the environmental liabilities of mining. As one of the few mining microbiologists focused on cold environments like Canada, she is working to create a Centre for Mine Waste Biotechnology that will nurture the next generation of scientists, companies and microbial mining tools.

CIM: What path led you to your current work at Laurentian University?

Mykytczuk: Very early on I was focused on how microbes work in various environments. While I was an undergrad at Carleton University, I got a co-op placement at the National Research Council looking at vaccine development for various pathogens; for my PhD at Laurentian, I looked at the adaptation of acid mine drainage (AMD) bacteria to acidic and cold environments. For my post-doc at McGill University, I worked in the Canadian Arctic, and I really got a sense of just how extreme bacteria can be, in that they can survive and work in environments where nothing else survives.

CIM: At what point did you make the jump to mining?

Mykytczuk: When I completed all that work, I realized there was a niche in understanding how bacteria worked in mining contexts in cold climates like Canada, and that’s what really got me interested. So that brought me back to Sudbury, where I got my Industrial Research Chair in 2016.

CIM: As far as the applications to mining, your work looks at bioremediation and biomining. How do both of these work?

Mykytczuk: With biomining or bioleaching, we are looking to apply microbial communities either in situ, so something like a heap leach, or in a bioreactor to process mine waste. The latter could be tailings, waste rock, or even slag. The goal is to use microbes to accelerate mineral weathering to extract some of the available metals that are still present post-processing. The advantage of that process is that a lot of [historical] tailings are weathering slowly in the environment, leaching metals and toxic acidity into the environment. So if we can use bioleaching as a treatment step, it’s sort of the first step in a series of remediation steps that can clean up the site and make it less reactive. By oxidizing the iron and the sulfur, you are reducing the ability to generate AMD over the long term, and with it you are removing a lot of the metals that might be causing toxicity in downstream aquatic environments. The residue left over after the processing is less reactive and amenable to things like covers and establishing plants to clean up and close the site.

CIM: You have said it’s only now that technology has advanced to the point that we can understand microbial communities at a mine site. How has the technology evolved?

Mykytczuk: We’ve known for 40 years that bacteria are catalysts – which can catalyze the reaction and the breakdown of minerals in the same way as smelting or chemical solvent extraction. But the challenge was that studying microbes is very difficult because over 90 per cent of microbes from the environment can’t be cultured, which means we couldn’t bring them into the lab to study them. This has really only changed in the last 10 or 15 years, with the advent of genomic sequencing technology. What’s changed is that all the early studies and processes that we developed through leaching technology 30 to 40 years ago were based on a few key species we could grow in a flask in the lab. Now we can go to any mining environment, take a scoop of soil and sequence all the DNA in that material, and it gives us a library of the thousands of different bacterial species that are present. We can then get a sense of what they are capable of doing, and hone in on the key organisms we need to break down a particular mineral, say chalcopyrite, for example. Now we have an ability to open up a black box, which we assumed we understood. It’s really been this ability to look at the community in real time and start asking, “What are these processes?” And with that, the ability to control the ecosystem.

Related: The rise of microbes in the mining industry

CIM: Bioleaching is currently used in the world to extract things like copper, cobalt, nickel, and uranium – but are there still a lot of metals and minerals that we can’t use biomining for yet?

Mykytczuk: It’s exciting because for every mineral and environment out there, there’s a community of organisms that has adapted to it. The advantage now is that not only do we know there is a much greater diversity of organisms, but it allows us to start looking at very refractory materials. We can now see if there is something that can break down minerals that historically have been very difficult to process.

CIM: How can micro-organisms help miners deal with AMD?

Mykytczuk: The bioleaching processes most of the time are oxidative processes, which means they are going to accelerate the generation of AMD. But if you’re doing it in a controlled environment, then effectively you are reducing that capacity over the long term. There is a whole community of bacteria that can run the reaction in the opposite way, so rather than breaking down and oxidizing the sulfides and causing the AMD, they can reverse the process and capture those sulfides and limit the amount of AMD they produce over time. These are the sulfate-reducing bacteria, which are dominant in places like wetlands; they can capture and sequester a lot of metals, are stable and do not leach out into the environment.

CIM: Early in your career you had worked in cold environments. From what I gather, this is still an area of focus for you?

Mykytczuk: Yes, absolutely. One of the things that got me interested is that we’re behind in applying bioleaching technologies compared to the rest of the world, and we have a huge opportunity given the thousands of abandoned sites we have in Canada, and the value of metals just sitting in those deposits.

CIM: Why is Canada behind the curve using microorganisms in mining?

Mykytczuk: When you look at all the countries where bioleaching is used right now, most are tropical or pretty temperate, without the [winters] we get in Canada. My research is looking at bacteria that can break down mine waste happily at cold temperatures. I started this work as my PhD thesis characterizing some of these cold-active bacteria. Even at temperatures of 0 C and 5 C, these bacteria are still able to break down a lot of those minerals at a similar rate to warm-adapted organisms. In this area of research, there are only a handful of [researchers] in the world focused on cold-active mineral weathering, but we are starting to tease apart the role of these organisms not only in AMD production in cold climates and alpine environments, but then applying these in biotechnology so it can be suited to cold temperatures.

Related: The growing evidence that willow trees could help clean up contaminated soil

CIM: Can you tell me about your work with Laurentian University’s Living with Lakes Centre – what is your role there and what are you working on?

Mykytczuk: I was brought on as a research scientist at Laurentian University in late 2012. The Living with Lakes Centre includes a core of scientists who first came together decades ago from government and academia to better understand stressed aquatic ecosystems in places like Sudbury, where historical industrial emissions like sulfur dioxide have had a profound effect on lake ecosystems. [The Centre leadership] has more recently come around to understanding that microbial ecology is very important in understanding how systems recover and how nutrients can be reestablished in lakes that are struggling to get back to normal. As part of my broader research program, I’m working to better understand the microbial communities in these impacted environments, including peatlands, lakes and streams.

CIM: As far as commercializing microorganisms, particularly in cold climates like Canada, what kind of tools will miners be able to draw on 10 years from now?

Mykytczuk: There is an opportunity for many new companies to develop optimized applied versions of this technology for all of the different mine wastes that we have. Whether it’s going after silver, cobalt or gold, the opportunity is to have and apply these technologies as part of a tool set. So the challenge right now is to scale up these technologies, make sure they are robust and reproducible, and then apply them to different environments. Every tailings environment is different, so the technology has to be adaptable. And, making sure that that is available to companies that will start up and that they have microbiologists on their team is something I’d like to see develop in the next five to 10 years.

CIM: Can you tell us about the centre you’re working on setting up now?

Mykytczuk: I’m looking at developing a Centre for Mine Waste Biotechnology where we’d be advancing [technology] we have, bringing it up to full piloted-demonstration scale, and allowing and incubating new companies to take that technology out into the mining sector. We’re still at prefeasibility with this, which should be completed by this fall, but it’s something I’d like to see develop in the next five to 10 years. There are very few centres like this in the world.