Nearly a thousand years ago Viking explorers set up the first iron smelting operation in the New World
By Katelyn Spidle
October 05, 2015 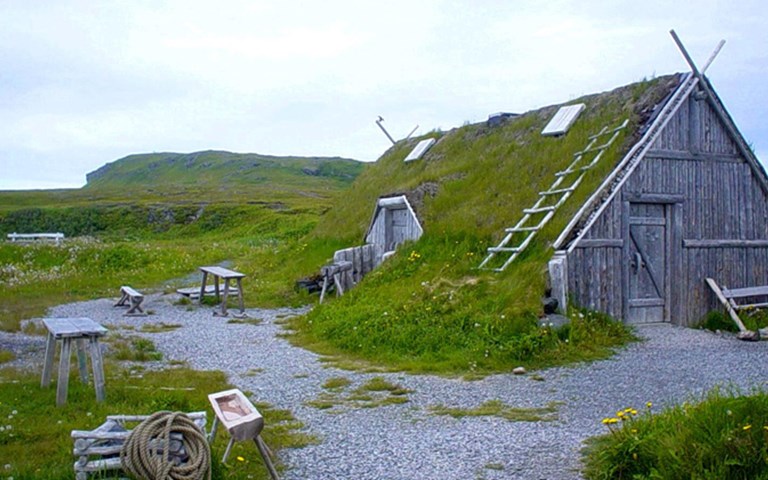 Viking explorers constructed eight buildings at present-day L'Anse Aux Meadows, Newfoundland in AD 1000, two of which were used to produce iron from nearby wetlands. Flickr/Andre Carrotflower

Emerging from his quarters one day in AD 1,000, Viking explorer Leif Eriksson finally saw what he had sailed across the North Atlantic in search of: a rocky shoreline looming in the distance. His 30-man crew furled the ship’s sail, dropped anchor and rowed to the shores of present-day Newfoundland.

Writings and oral histories passed down from the Viking Age tell that growing populations and tensions between clans caused the Norse people to expand westward from Scandinavia over a period of more than 250 years. They crossed the Scottish Isles and Faeroe Islands before colonizing Iceland.

Eventually, Erik the Red, Eriksson’s pioneering father, led a series of voyages that resulted in the colonization of Greenland. The settlements thrived, but unfortunately, the land turned out to be low in key natural resources like lumber and iron.

The purpose of Leif Eriksson’s western voyage had been to locate lumber and animal pelts. At the time, the North Atlantic was experiencing a period of warm climate, and the forest in Newfoundland was dense with tall trees and wild game. He would return to Greenland that autumn transporting plenty of materials to trade and sell. While exploring the lush fields along the coast, Eriksson came across a curious fruit that was growing wildly across the region: grapes. The discovery would inspire him to name the area Vinland.

Here, Eriksson’s party set up a summer base camp. Off in the distance, mountain springs descended into a large freshwater lake before being funnelled through a winding stream that snaked around and flooded a rich peat bog. The Vikings recognized the characteristics of the landscape and identified the presence of iron in the wetlands.

The crew erected eight buildings immediately west of the iron-rich peat bog. The largest – at 28.8 by 15.6 metres – served as the captain and crew’s sleeping quarters. Three others contained small woodworking sheds and even smaller rooms for slaves. A fifth housed a large woodworking and textiles shed; the sixth became a ship repair shop where archeologists would later locate rivets and nails.

The last two buildings housed the first production of iron in the New World. Vikings were keen metallurgists, and most explorers and settlers had at least a rudimentary knowledge of how to locate and produce bog iron. They would smelt the ore in a small, clay-lined cylindrical furnace, known as a bloomery. Once the smelting process was complete, the iron was then forged in a smithy.

Archaeological remains of the buildings were discovered almost a thousand years later and would act as proof of pre-Columbian European contact with North America. Today, the site holds UNESCO World Heritage status and is named L’Anse Aux Meadows. In seven separate digs between 1961 and 1968, archaeologists Helge Ingstad and Anne Stine Ingstad found 15 kilograms of slag, which is thought to have produced about three kilograms of usable iron. However, analysis of the slag revealed that it would have been possible to extract considerably more iron from the ore. This suggested that Eriksson’s men were not particularly skilled compared to other metallurgists from the Viking Era.

Nonetheless, Eriksson and his crew would have had a more advanced knowledge of these processing techniques than aboriginals in North America. Found in glaciated regions across the globe, bog ore was an incredibly valuable natural resource for the Norse who used it to make tools, armour and weapons. It is for this reason that Thorfinn Karlsefni – an Icelandic explorer who led a subsequent journey to Newfoundland – refused to trade the precious metal with the Beothuk First Nation he encountered. At that time, the now-extinct Beothuk peoples carved bone and wood to make tools and weaponry.

L’Anse Aux Meadows never became a permanent Viking settlement. It is impossible to determine exactly how long the camp was used, and there are several theories that the Vikings may have explored the Canadian Maritimes further and the northeast coast of the United States. To date, L’Anse Aux Meadows contains the only physical proof – consisting of 98 nail fragments and countless rivets scattered throughout the site – of a Viking presence in North America.