Scheming brokers, including a famous author's son, deceived many speculators during the Cobalt, Ontario silver rush
By Douglas Baldwin
February 07, 2017 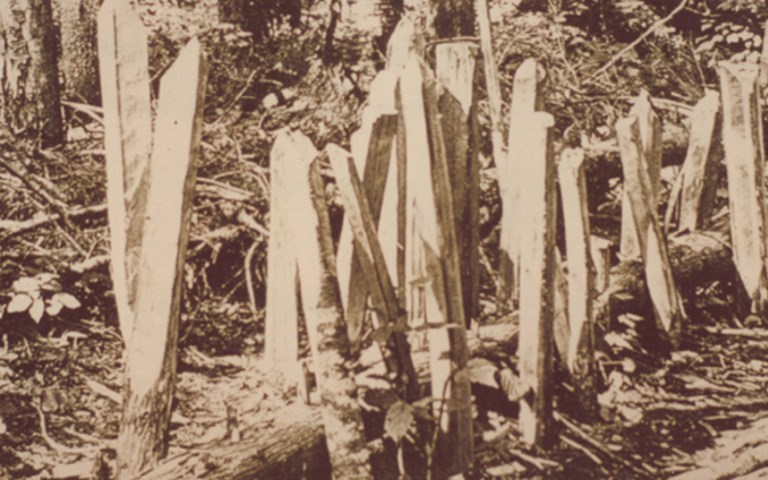 Cobalt, Ontario experienced such a boom that multiple prospectors would make claims on the same land, and whoever was first to prove mineral value could keep the claim. Courtesy of the Cobalt Mining Museum

Two years after the 1903 discovery of rich silver deposits in northern Ontario, a Toronto brokerage firm asserted that “when you take into consideration that Cobalt’s mines have produced more in value than the Klondike is producing per annum, or has ever produced, you will have some idea of the great results that will come out of this camp when fully developed.” Mining companies licensed to work in Ontario grew from 43 in 1903 to 683 four years later. For three consecutive days, mounted police in New York City cleared Broad Street of would-be investors who were obstructing traffic in their efforts to buy Cobalt shares from the curb brokers.

Stories of millions of dollars changing hands overnight were legion. The Canadian Annual Review recounted the tale of a North Bay resident who made $15,000 by merely picking up silver nuggets lying on the ground. Some stories were true, but many more were fabrications dreamed up by scheming brokers to deceive unwary speculators. Excited by exaggerated tales of sudden wealth, the public readily bought shares in every Cobalt “mine.” Water-filled holes were described in advertisements as “the greatest, the richest, the most wonderful proposition.” Although thousands of shareholders made huge profits and about a dozen owners became millionaires, they were, in fact, the exception.

In the most notorious stock fraud, Julian Hawthorne was convicted in a United States federal court of mail fraud for selling worthless shares of imaginary mines near Cobalt. Hawthorne, the son of The Scarlet Letter novelist Nathaniel Hawthorne, was a well-known American writer and journalist who wrote for Cosmopolitan and the New York Journal. In 1908, Dr. William J. Morton, son of pioneer anesthesiologist William Morton, invited Hawthorne to join him in promoting several Cobalt mining companies. Also involved in the fraud was Josiah Quincy, assistant secretary of state under President Grover Cleveland, and the notorious professional stock promoter Albert Freeman. Despite warnings published in the Canadian Mining Journal, the fraudsters sold between $3 and $4 million in empty stocks.

The United States Attorney General indicted the four men, who he termed “the most notorious gang of swindlers that had ever infested New York,” of mail fraud in 1912. The trial began in New York in November 1912 and lasted 70 days. A long list of witnesses testified that they were induced to invest by Hawthorne’s “personal letters.” These letters, the court was shown, were in fact mimeographed by the thousands and signed by women trained to forge his signature. Several witnesses informed the jury that when they visited the mines they found “nothing but a hole in the ground.” In his closing statement, the prosecutor urged maximum sentences to stop the “crime of bamboozling the gullible public by attaching well known and respected names to the literature of company promotions.”

Hawthorne and Morton were found guilty and sentenced to one year in the United States Penitentiary, Atlanta, a federal prison in Atlanta, Georgia. The jury found Quincy not guilty. Freeman was sentenced to five years’ imprisonment, but was set free on appeal. Prior to the trial, the grand jury warned the public against false prospectuses and lamented the fact that such frauds depended upon advertising in newspapers, which failed to warn the public about the possible pitfalls.

Ontario had also been lax with its laws when it came to mining stocks. The provincial government was so eager for American and British capital investments that it allowed the mines to offer shares for a discount without any personal liability on the directors’ behalf, unlike in other industries where directors were held personally responsible for the accuracy of their companies’ advertisements. However, when it became evident that companies on the Mining Exchange were flagrantly disregarding the clauses of the Ontario Companies Act requiring prospectus accuracy, the provincial government changed the law to attach more responsibility to company directors, and in 1907 required all advertisements to state the qualifications and remuneration of the directors and the interest of each director in the promotion.

Unfortunately, the public could not be dissuaded from buying Cobalt stocks sight unseen.  Their cupidity and the machinations of unethical brokers were only quelled when the high-grade silver ore petered out during the First World War.