The lost gold of Pitt LakeWhen Slumach of the Coast Salish indigenous group was hanged for murder in 1891, he took the secret location of his rich gold mine with him

When Slumach of the Coast Salish indigenous group was hanged for murder in 1891, he took the secret location of his rich gold mine with him
Jen Glanville
March 23, 2017 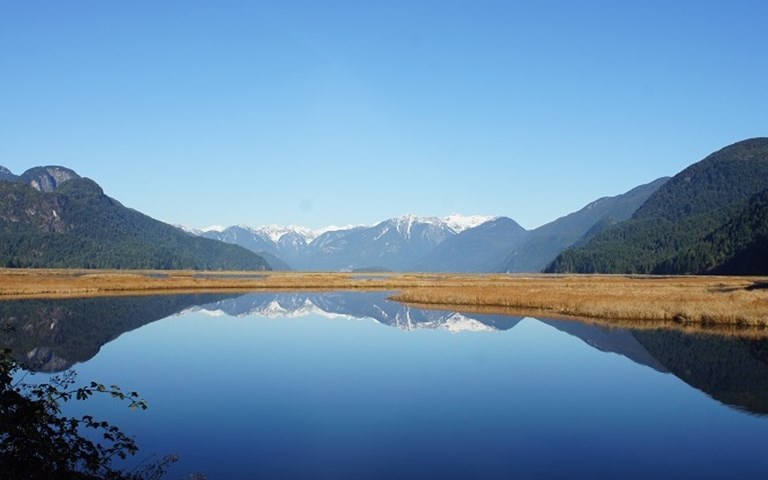 The steep and thickly forested slopes of the Pitt Lake region in British Columbia are rumoured to hide Slumach’s legendary gold mine. Tjflex2/Flickr

In the Pitt Lake Region of southern British Columbia, there is a legend so compelling that to this day, people continue to scour the area for gold despite warnings from regional search and rescue squads. They are looking for a lost mine that has tantalized adventurers and historians for over a century. At the heart of the legend is a man named Slumach of the Coast Salish indigenous group.

Little is known about his early life, but for the most part, Slumach lived alone near Widgeon Slough (now Widgeon Falls), south of Pitt Lake, in the 19th century. On Sept. 9, 1890, Slumach made headlines in The Daily Columbian for murder. Louis Bee, who was half French, half Kanaka and a bit of a bully, and had a history of tormenting Slumach. Their bad blood ended with Slumach shooting Bee on the banks of the Lillooet Slough (now the    Lillooet River) after an altercation. Bee died instantly.

When word of the crime reached authorities in New Westminster, the nearest city downriver, a manhunt ensued. Slumach turned himself in on Oct. 20 and, following a short trial, Justice Montague Drake convicted him of murder, sentencing him to death. At 8 a.m. on Jan. 16, 1891, Slumach died by hanging.

Years after Slumach’s death, rumours about his life began to surface. It was said that he would often show up in New Westminster with nuggets of raw gold. After spending freely on food, drink and women, Slumach would retreat back to Pitt Lake, oftentimes with a female companion, who would never be seen again.

New Westminster residents were intrigued by Slumach and his seemingly endless supply of raw gold, but he was evasive and tough to follow through the bush. Even his impending death did not spur him to reveal the location of the riches. Before dropping from the gallows, Slumach put a curse on the mine by saying “Nika memloose, mine memloose,” which roughly translates to: when I die, mine dies.

Word of Slumach’s tale spread through West Coast mining communities and, despite the curse, gold seekers flocked to Pitt Lake in search of the secret mine. The first notable attempt came in 1901, when miner W. Jackson travelled to New Westminster from San Francisco, intent on finding Slumach’s gold. He set off for the steep and thickly forested slopes of the Pitt Lake region in early spring and returned five months later.

When he got back to New Westminster, Jackson was in rough shape. He returned to San Francisco where he eventually died, but not before he wrote a letter to the man who had grubstaked his expedition, named Shotwell. In the letter, Jackson claims to have discovered the lost gold mine.

Jackson’s letter recounts bedrock that is “yellow with gold” and the discovery of nuggets, some as big as walnuts, and some containing quartz. Jackson noted that the nuggets could be found in the millions – far too many to be able to carry back. The miner claimed to have taken as much as he could and buried the rest under a large tent-shaped rock. The letter ended with a vague description of the gold’s location, where Jackson instructs Shotwell to go 20 miles north of the lake and look for a stream full of white water that has no obvious entrance or exit.

While there has been much debate as to whether or not Shotwell attempted to find the mine, he did sell the letter to businessmen in Seattle, and from there many copies were produced.

One copy made its way to prospector Robert “Volcanic” Brown, who had successfully located various mines in the Kootenay region of B.C. and was up to the challenge of pinpointing the legendary mine near Pitt Lake. He started the first of several expeditions to the area in the late 1920s.

Brown’s 1931 expedition was his final attempt. He did not return when expected, so a search party was sent to locate him. The party found what was thought to be Brown’s most recent camp on an icefield close to Stave Lake. All of his possessions were in place, giving the impression that he had planned to leave for only a short moment. Brown’s body was never found.

What the search party did find, however, further fuelled the curiosity of gold seekers: 11 ounces of raw gold was in a jar in Brown’s camp. Perhaps Brown discovered Slumach’s lost mine, and became a victim to the curse, or maybe the unforgiving terrain proved to be too much for the old man. Whatever the case, Brown left just enough behind to give credence to an old legend, which stubbornly refuses to die.