The search for the Lost Lemon MineThe Lemon mine holds the promise of untold riches for anyone who can locate it, but a dark fate follows most who dare

The Lemon mine holds the promise of untold riches for anyone who can locate it, but a dark fate follows most who dare
By Katelyn Spidle
March 21, 2016 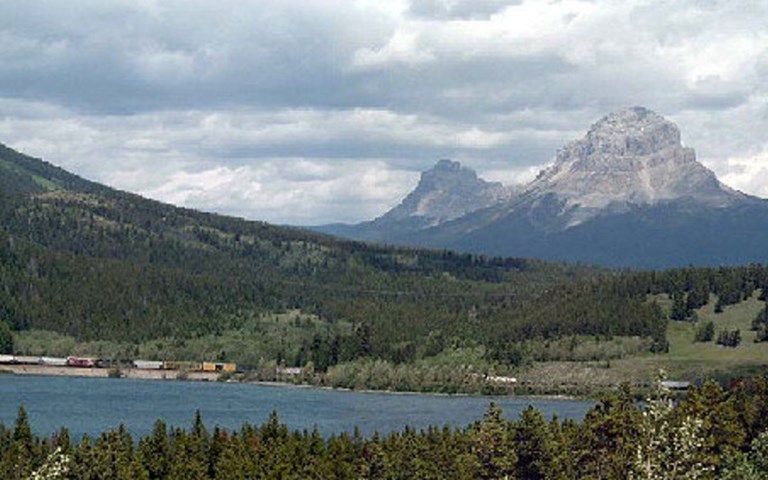 One of the few men who knew the location of the Lost Lemon Mine perished of alcohol poisoning the night before he was to meet a prospecting party at Crowsnest Lake (pictured) to guide them to it. Courtesy of Wikimedia Commons/Michael Rogers

In the late winter of 1870, a group of American prospectors ventured northeast from the Tobacco Plains in northern Montana in search of gold along the North Saskatchewan River. Finding nothing, two men – Frank Lemon and his co-explorer, known as Blackjack – decided to head off-course to test their luck on new terrain.

They headed south and followed an old Indian trail along Highwood River and up into the mountains. It is said that somewhere near Crowsnest Pass in southwest Alberta, the pair began panning in a river that connected with three mountain streams. Finding likely showings, they followed one stream’s flow as it trickled down from the headwaters. The area proved to be rich with gold diggings.

After spending some time panning in the stream, the prospectors went to fetch their horses, which were tethered nearby. Looking up, they noticed a large, towering ledge with thick streaks of solid gold. Yet rather than celebrate, Lemon and Blackjack got into a heated argument. Would they set up camp and mine it immediately, or come back later with more supplies when the weather was fair?

When Blackjack retired for the evening, Lemon let his rage get the better of him. He crawled from his tent and chopped his sleeping partner’s skull with an axe.

Lemon became unhinged when he realized what he had done. Building a raging bonfire, he grabbed his pistol and paced back and forth next to Blackjack’s lifeless body until dawn.

Meanwhile, a hunting party of Stoney Indians were heading south into the Livingstone Range. Many accounts claim that two had seen Lemon and Blackjack from afar right before the prospectors found the golden ridge and decided to track them. After witnessing Lemon murder Blackjack, the Indians reported the murder – as well as the gold – to their chief. Upon hearing of the riches contained within the ledge, the chief swore the men to secrecy.

When Lemon returned to Montana, he blamed renegade Blackfoot Indians, known at the time for killing prospectors, for Blackjack’s death. Yet when he visited the local priest, Lemon confessed to Blackjack’s murder, revealing also the rough location of his prized gold discovery. The priest kept Lemon’s secret safe and quickly sent a man named John McDougall to the site of the crime to give Blackjack a proper burial.

It is said that McDougall found the ledge, located the body and laid it to rest. Upon his return home, a wealthy prospector named Lafayette French – the man who had funded the initial expedition that led to Lemon and Blackjack’s discovery – commissioned him to lead a group of prospectors out to exploit Lemon’s golden ridge. Unfortunately, McDougall took the mine’s location to his grave as he died of alcohol poisoning the night before he was to meet with the prospecting party in Crowsnest Lake.

Some versions of the story claim that the Stoney Indian chief who had sworn his men to secrecy had also laid a curse upon the site to guarantee it would never be found again. And oddly, similarly sinister twists of fate seemed to befall anyone who tried to unearth Lemon’s elusive gold strike.

Encouraged by the priest and fellow prospectors who had heard the tale, Lemon attempted to lead a handful of expeditions to the site. Unfortunately, his mental health had deteriorated after the murder, so that he was never able to find the site again. Worse, he appeared to become increasingly deranged and aggressive the closer he would get to the mine. Thus Lemon’s golden discovery became known as the Lost Lemon Mine.

The priest, determined to claim the mine, organized another expedition more than a decade later, in 1883. But a forest fire that had blazed through the region rendered the route impassable.

Later, French joined an ongoing expedition led by an acquaintance of Lemon, which had so far proven futile, but fell gravely ill shortly thereafter, forcing him to return home. Undeterred, he spent the next 30 years of his life searching for it.

A friend received a letter from French years later, claiming that he found the spot. Shortly after mailing the letter, however, French died in a mysterious fire that burned his cabin to the ground.

In the 145 years since the legend was first told, there have been numerous tales of many lives spent searching for the Lost Lemon Mine.

The legend even spurred two false gold rushes, in 1931 and 1988, where prospectors found gold so poorly concentrated it was not worth extracting.

Some say it is along the Saskatchewan-Montana border, others swear it is hidden along the Livingstone Range, and even more believe it is trapped inside the Crowsnest Volcanics in southwest Alberta. Geologists have proposed theories based on science, journalists have written first-hand accounts and witnesses have drawn crude maps. But to this day, the Lost Lemon Mine has never been rediscovered.