Who brought the canary into the coal mine?"Mine canaries" and their unique role in 19th and 20th century mining operations

"Mine canaries" and their unique role in 19th and 20th century mining operations
By Correy Baldwin
November 01, 2014 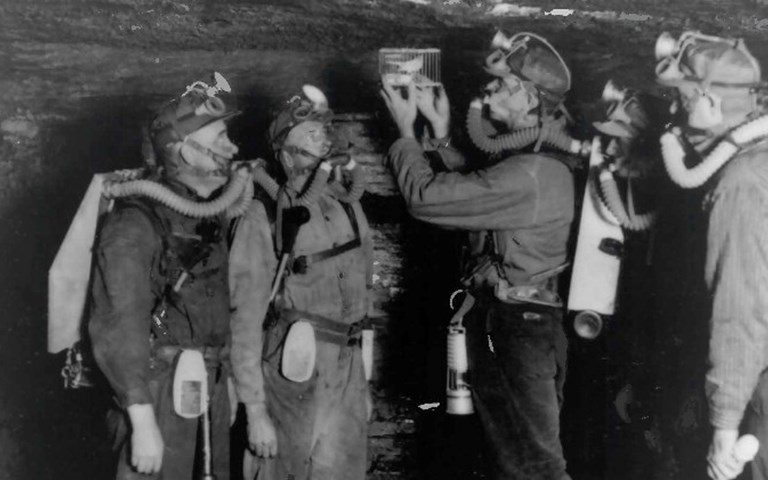 At the turn of the 20th century, mine rescue crews brought canaries underground with them in the wake of an explosion to detect noxious gases. Courtesy of the United States Mine Safety and Health Administration

The poisonous or flammable pockets of gases in a mine, known as “damps,” earned evocative names. Firedamp is flammable and usually consists of methane. Stinkdamp is the explosive and particularly pungent hydrogen sulphide. Blackdamp (or chokedamp) consists of suffocating carbon dioxide (CO2), and afterdamp is mainly carbon monoxide (CO) produced after an explosion. Afterdamp, an especially lethal enemy, being odourless, colourless and tasteless, was extremely difficult for 19th century miners to detect – unless, of course, they were carrying a yellow canary with them.

Small animals like cana­ries proved useful for detecting poisonous gases because of their rapid breath­ing rate and high metabolism, making them more sensitive to the effects of poisonous gas. When exposed to low levels of CO, a canary has difficulty breathing and becomes quite visibly agitated and unsteady. Miners knew there was poisonous gas around when the bird began to sway on its perch or ­collapse.

Regular miners rarely brought canaries with them into the mines on their shifts. The birds were, instead, primarily used by rescue crews following explosions resulting from regular detonations during mining, sparks from mining equipment, or the open flames of the miners’ carbide lamps. Combustion in the mines produced CO, which could kill miners through asphyxiation.

Canaries were brought underground in cages about the size of a lunchbox, made out of a durable, transparent material known as Perspex. The handles doubled as a small oxygen canister, and if a canary collapsed from exposure to CO, the miner could cover the ventilation holes and open the oxygen canister to revive the bird. It was not in anyone’s interest to let the birds die, and miners were known to grow fond of them and treat them like pets, whistling to them as they worked. Some even carried extra oxygen bottles with them especially for the canaries just in case they needed a refill.

A few mines raised their own canaries, but more commonly they purchased them from private breeders – often families who raised mine canaries to help make ends meet. Other mines purchased canaries from pet shops, which had difficulty selling canaries with poor colouration and female canaries (which generally do not sing as well as the males), both of which could be purchased inexpensively.

The idea of using small animals to detect poisonous gases in the mines was first suggested by the Scottish physiologist John Scott Haldane. He investigated a number of mine disasters in the late 1890s, examining the bodies of miners killed after explosions and determining they had been killed by CO exposure. From this discovery, he designed the first respirators for mine rescue crews and suggested using safety lamps that burned with a bright bluish tint when CO was present – as well as canaries or white mice – to detect the poisonous gas. However, even these lamps were not as sensitive as the yellow birds, so most rescue crews preferred to respond with a canary, or opted to use both.

Before the introduction of canaries, miners had long known to watch the behaviour of mice, which were plentiful in the mines, especially those with underground stables, where straw and feed was kept for the mine’s pit ponies. If miners saw mice scampering away from an area or found dead mice, it was a sure sign of gas. Using canaries quickly caught on and by the early 1900s they were being used in mines around the world, along with such other birds as linnets, redpolls and pigeons. In 1914, the United States Bureau of Mines tested a number of small animals to find out which reacted more quickly and most visibly when exposed to CO. Unfortunately for the yellow canary, it won out, followed closely by white mice, then chickens, dogs, pigeons, sparrows, guinea pigs and rabbits.

Canaries were finally phased out in 1987 as new detection technology was developed. England, the last country to use them, officially replaced the birds with electronic (and featherless) methane and CO monitors, by then more effective and precise than any living creature. After nearly a century of life-saving work, the “canary in the coal mine” lives on as a powerful metaphor for an early warning sign for danger.