Two years and changeGovernment and industry code changes mark two-year anniversary of Mount Polley, but public not ready to forgive 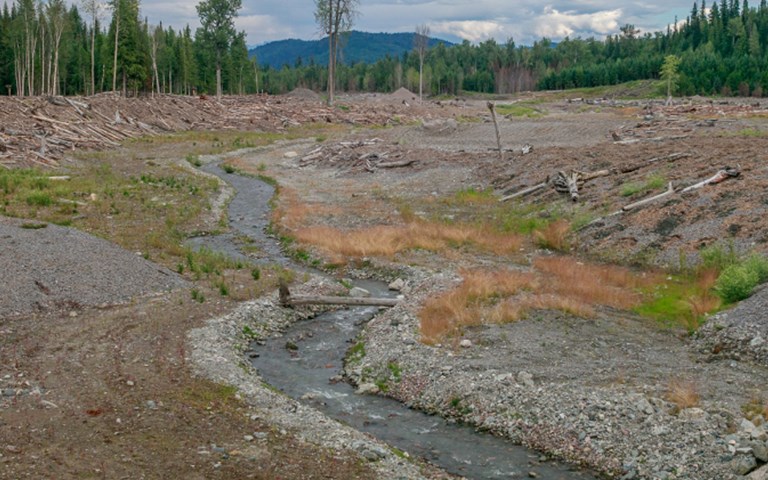 The current focus for the two First Nations most affected by Mount Polley is ensuring the restoration process of Hazeltine Creek, pictured, is carried out, and following the long-term outcomes of environmental monitoring. Courtesy of Imperial Metals

Two years after the August 2014 tailings dam failure at Imperial Metals’ Mount Polley mine, both the flawed impoundment and the rules governing such structures have undergone structural tweaks. Industry professionals say those changes go a long way toward answering calls for reform and preventing another similar incident, although many members of the public remain unsatisfied.

Production is back to normal at the Mount Polley mine site, where British Columbia’s Ministry of Energy and Mines (MEM) gave the go-ahead to resume full operation in June. Imperial Metals has brought soil erosion under control and rebuilt its tailings impoundment with the guidance of an independent tailings review board (ITRB).

“We’ve not only repaired the breach area and tied that into the existing facility, but we’ve also completed buttressing around the entire perimeter and main embankments of the tailings facility,” said Steve Robertson, Imperial Metals’ vice-president of corporate affairs. “This has given us a much higher factor of safety, and we have a great deal of confidence in our tailings facility as we move forward.”

To receive its permits and create a long-term environmental monitoring plan, the company needed to engage intensively with the local First Nations. Brian Olding, environmental consultant to the Xats’ull (Soda Creek) First Nation and Williams Lake Indian Band, said two years of studying permit changes and ecology has significantly boosted both communities’ capacity to respond to the complex situations involved in the permit changes. “[Mount Polley has] some of the best consultants anywhere working on this,” he said. “So for us to match up to them, we had to develop our own expertise and learn how to manage that.” First Nation Resource Managers, as well as both communities, have gone through a crash course in environmental assessment expertise associated with mining.

Now, said Olding, the major focus is ensuring the restoration process on Hazeltine Creek is carried out and following the long-term outcomes of environmental monitoring. Despite strong progress, he suggested, further results would be critical to easing communities’ anxiety and frustration. “There are members of both communities that are very skeptical of everything, just because of the magnitude of the event that took place,” he said.

Urgent calls for action from investigators have taken root in provincial and professional guidelines. By July a provincial code review committee had amended the Health, Safety and Reclamation Code for Mines to address 20 out of 43 recommendations made by the independent engineering review panel, the Chief Inspector of Mines, and the Auditor General of B.C.

The new requirements include a review of best available tailings technologies and a company-funded ITRB to give expert, non-binding advice. Peter Williams, senior vice-president for technical services at Seabridge Gold, said he welcomed these steps. The ITRB for Seabridge’s proposed KSM gold-copper project provided more than 90 action points in its first report in April, with recommendations like enhancing the dam’s underdrain system and calculating the balance between needed and available construction materials. “Where a lot of dams get in trouble is early on,” said Williams. “You want to build a dam so fast that you don’t have the construction materials to do it, and then the dam starts to fill too fast.”

The Fair Mining Collaborative, an educational organization that builds B.C. communities’ and First Nations’ capacity for informed engagement with the mining industry, had published its own set of policy recommendations, some of which the B.C. code revisions met or exceeded. “We have to give credit where credit’s due,” said senior researcher Glenn Grande. But unmet requests made to the review committee included a provincial ITRB (“they were interested, but felt that they couldn’t fund it”), permitting based on a miner’s past performance, whistleblower protection for mine employees and a requirement that exploration and mining work be contingent on any agreement required by affected First Nations.

Interlocking committees have been updating tailings management guidelines published by MAC, the Canadian Dam Association, and the Association of Professional Engineers and Geoscientists of BC (APEGBC). Ben Chalmers, vice-president of sustainable development at MAC, said multiple professional associations were cooperating to come up with a coherent response and maintain a single global standard.

MAC’s board approved a first batch of amendments to its Towards Sustainable Mining (TSM) tailings protocol in June. “One of the most important changes, in our view, was in moving the audit requirements,” said Chalmers. MAC members are currently required to perform internal audits to attain the second-highest practice level, AA. This change moves the internal audit requirement down to the third-highest, A. MAC will also require that all members develop plans for reaching level A and implement their plans within three years.

Despite frequent use of the term after the spill, until now the “Engineer of Record” has not actually existed in dam construction. Nor were there clear guidelines as to how a new engineer should assume responsibilities from the previous one. Mount Polley’s original design engineer was replaced in 2011, and in the aftermath of the spill there were disagreements as to each firm’s degree of responsibility in identifying and addressing problems.

The amendments – along with the new B.C. code – also give instructions for reporting hazards, said Mitchell. “There wasn’t real clarity on, ‘Okay, I have a contractual obligation with the mining company, I’ve seen this issue, what’s my responsibility to the mining company that I have a contract with, and what’s my responsibility to the regulatory authority?’”

Calvin Sandborn, legal director of the Environmental Law Centre at the University of Victoria, argued that industry-driven responses would not satisfy a public newly aware of mining hazards.

“I think the most important change is that the public has lost confidence in government’s ability to regulate the mining industry,” he said. “We recommended massive change to mining regulation back in 2011. Government’s response was, ‘We have the best regulatory system in the world, go away.’ And that whole line of argument has collapsed.”

Protests and lawsuits around the second anniversary of the spill suggest the public is not ready to forgive and forget. Two protests, just days apart, targeted the mine site and the company’s Vancouver headquarters. The Tsilhqot’in First Nation filed a civil suit in August against the government of B.C., Imperial Metals, and Mount Polley’s former engineering consultancies, Knight Piésold and Amec Foster Wheeler (both of which Imperial itself sued for negligence in July). Two Quesnel Lake tourist businesses sued the same defendants in July.

Like many critics of the current state of progress, David Chambers, president of the Center for Science in Public Participation, is particularly concerned by the lack of emphasis on ending water-capped impoundments.“From a practical [perspective], we can already see that things haven’t changed with regard to that,” he said, citing the tailings management plans at Seabridge’s KSM and Imperial’s Red Chris mine.

Seabridge commissioned Dirk van Zyl of UBC, who led the call for phasing out water storage, to review alternatives to KSM’s planned water-covered impoundment. His review in August 2016 affirmed the original design.