NDP and Greens to form minority government in B.C., toppling LiberalsTrans Mountain pipeline at the heart of cooperation agreement between B.C. NDP and Greens

Trans Mountain pipeline at the heart of cooperation agreement between B.C. NDP and Greens
By Elle Crosby
May 31, 2017 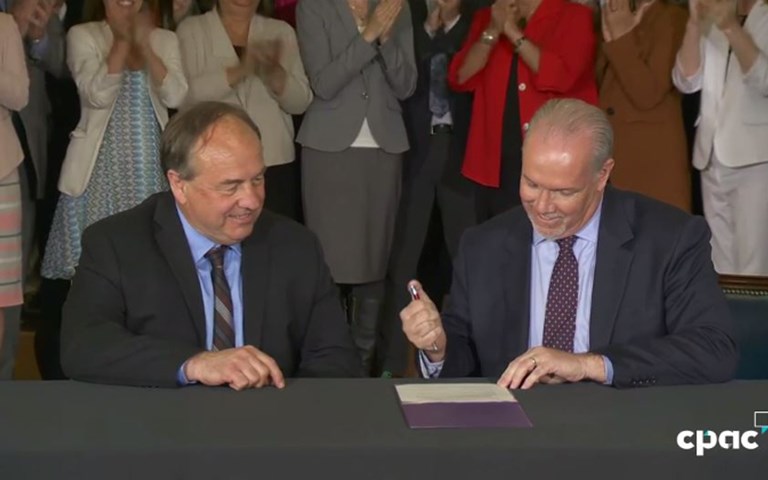 British Columbia’s Green Party will help the NDP form a minority government, party leaders Andrew Weaver and John Horgan announced at a news conference on May 29.

The May 9 election saw B.C.’s ruling Liberals reduced to a minority win with 43 seats, one shy of a majority government. The NDP took 41 and the Greens three, their best showing in provincial history, giving them the balance of power in the legislature.

At a joint press conference on May 30 where the two parties ratified their co-operation plan, Weaver explained that he supported the NDP because they were a “partner” in restoring the province’s “climate leadership” and helping to position B.C. in the “21st century economy.”

Throughout the campaign both the NDP and Green parties voiced their opposition to Kinder Morgan’s Trans Mountain expansion, which will increase the capacity of the current pipeline running from Edmonton, Alberta to Burnaby, B.C. to 890,000 barrels per day, up from 300,000 currently.

The agreement pledges to “immediately employ every tool available to the new government to stop the expansion of the Kinder Morgan pipeline.”

Prime Minister Justin Trudeau reaffirmed his support for Trans Mountain after the announcement from the NDP and Greens. "Regardless of a change in government, in British Columbia or anywhere, the facts and evidence do not change," Trudeau said at a press conference held jointly with Italian Prime Minister Paolo Gentiloni in Rome on May 30.

"The decision we took on the Trans Mountain pipeline was based on facts [and] evidence, on what is in the best interest of Canadians," Trudeau said.

Kinder Morgan Canada shares debuted on the Toronto Stock Exchange the same day, dropping as low as $15.75 but hitting $16.24 at close. They had been priced at $17 in their initial public offering, which itself was a decrease from the $19 to $21 target Houston-based Kinder Morgan had originally planned.

Christy Clark, incumbent premier and supporter of the Trans Mountain expansion, said during a press conference on May 30 that after reviewing legal precedent and consulting her caucus, she had a “duty to meet the house and to test its confidence. I intend to do that in very short order.” Clark suggested she may give a throne speech in the beginning of June, at which time the coalition of opposition members are expected to vote to not support the Liberals’ agenda.

When asked if she would step down, Clark said she was “happy to take on any jobs that the voters give me,” including the leader of the opposition “should the government fail the test of confidence, which seems likely.”

The co-operation agreement also calls for the B.C. carbon tax to increase by $5 per tonne in April of 2018, three years earlier than the NDP had promised in their campaign but in accordance with the Green Party’s timeline. The carbon tax, which is currently $23 per tonne, will increase each year to reach $50 per tonne by 2022 to meet the federal government’s carbon pricing backstop.