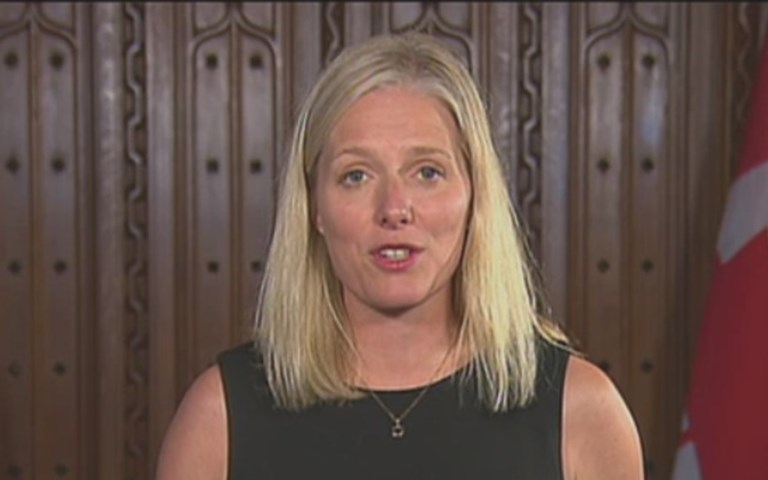 Environment and Climate Change Minister Catherine McKenna announced a carbon levy and output-based pricing system for provinces that do not create their own carbon pricing plan. Screencap courtesy of CPAC

The federal government’s “backstop” carbon pricing plan for provinces and territories that do not adopt their own will include both carbon levy and cap-and-trade elements, Environment Minister Catherine McKenna announced at a May 18 news conference in Ottawa.

“We think the provinces are best positioned to [implement carbon pricing], but we have designed a federal option that we believe is smart,” said McKenna.

The first part of the plan will be a levy on fossil fuels, which will charge the producers or distributors of the fuel, McKenna said. The second component, an “output-based pricing system,” will charge companies in industries for every tonne of carbon dioxide (CO2) they emit that exceeds the industry’s emissions-intensity standard, or have them purchase "offset credits" from the government. Companies that emit less than the limit will earn surplus credits that they can save for another year, or sell to another participant.

Mining operations that emit over 50 kilotonnes (kt) will be in the output-based system, and smaller mines can either opt in to the system or have a carbon levy passed onto them by fuel suppliers.

McKenna emphasized that the backstop plan would be revenue neutral for the federal government, meaning each provincial or territorial government will receive the revenues they produce.

The federal government’s “floor price” – the most basic plan a province or territory must implement – will start at $10 per tonne of CO2 in 2018, increasing by $10 each year to $50 per tonne in 2022. The overall approach will be reviewed in 2022 to ensure that it is effective and that Canada is on track to achieve its long-term goal of reducing carbon emissions by 30 per cent below 2005 levels by 2030.

The output-based system will not go into effect until a year after the legislation has passed, "in order to establish the emissions intensity-based standards for the sectors covered by the system," Mark Johnson, spokesman for Environment Canada, said in an email. "We cannot develop regulations until the legislation is passed and we know the jurisdictions in which the system will apply."

The plan drew flack from NDP MP and environment and climate change critic Linda Duncan, who said she was “delighted” by the discussion paper the Liberals released but pointed out in a joint news conference with party leader Tom Mulcair that a carbon tax is not enough to effect real change, especially in the early stages of the plan when the levy is lower. “The government has failed in delivering on the complementary pieces,” which, she said, “we absolutely need.” Duncan said the government needs to disclose how much carbon emissions would be cut by the measures, and cut fossil fuel subsidies to industry.

Currently 80 per cent of Canadians live in provinces or territories with some form of carbon pricing. British Columbia introduced a carbon levy in 2008, and Quebec has had its cap-and-trade system in place since 2013. Both Ontario and Alberta’s carbon pricing plans went into effect on January 1. All provinces and territories except for Saskatchewan and Manitoba signed onto the federal government’s Pan-Canadian Framework on Clean Growth and Climate Change in December.

Environment and Climate Change Canada is seeking feedback on the proposed plan until June 30.