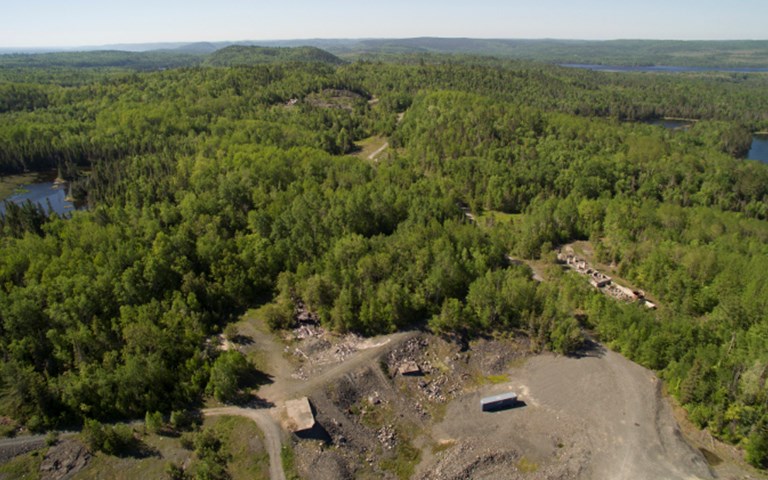 First Cobalt, which recently merged with Cobalt One and CobaltTech, is one of many exploration companies taking part in a cobalt staking rush near Cobalt, Ontario. Its Keeley-Frontier site is located 40 kilometres south of the town. Courtesy of First Cobalt.

First Cobalt finalized agreements to merge with Cobalt One and CobaltTech in late June, the latest of a flurry of mergers and acquisitions in and around the town of Cobalt in northeastern Ontario. The new company, which will be known as First Cobalt Corp., would be the dominant landowner in the historic Cobalt mining camp and the largest listed pure-play cobalt exploration company with an estimated market capitalization of $110 million.

Cobalt One shareholders would maintain a majority stake in the new company, which has numerous exploration claims in the camp, amounting to nearly 7,800 hectares. These will be absorbed into First Cobalt’s portfolio of cobalt properties in the Democratic Republic of the Congo (DRC) and 3,000 hectares of assets in Cobalt.

CobaltTech owns a 100-tonne-per-day mill in Cobalt, 11 past-producing mines in the area and properties in Quebec and one in northwestern Ontario.

The merger quelled a dispute between CobaltTech and Cobalt One over the sale of the camp’s only cobalt extraction refinery. It is the only North American refinery that does not set limits on arsenic content and would be fully owned by First Cobalt. The area’s geology is laden with arsenic.

Gino Chitaroni, president of the Northern Prospectors Association, said the merger is part of “a cobalt rush, harking back to the times of the Cobalt camp.” While named for the cobalt discovered on the shores of a local lake, the area was historically mined for silver, with a silver rush in 1903.

Chitaroni first started fielding enquiries about the area two years ago and saw a sharp spike of interest in early 2016. “There’s been a feeding frenzy,” he said. “To my knowledge, just about any major or minor cobalt occurrence located in northeastern Ontario is now gone. It’s been staked up in the last ten to 12 months.”

Cobalt is almost exclusively produced as a by-product of nickel and copper; there is only one primary-cobalt mine in the world, Bou Azzer in Morocco. In the Cobalt camp the metal occurs with silver and was historically seen by silver miners as a nuisance as it complicated smelting and refining. Cobalt has been mined sporadically in the town, in particular after World War Two, when the material garnered recognition for its heat-resistant properties and was used in airplane engines.

Demand for cobalt is booming given that it is a key component of lithium-ion batteries used in electric vehicles, laptops, tablets and mobile phones. As of July it was trading at US$28 to US$30 a pound according to CRU Group, soaring from a 15-year low of US$12.1 last year.

Edward Spencer, a senior consultant at CRU, said that the current price level “is a stable place for cobalt right now,” but added that “there’s also risk of it going a lot higher, if electric vehicle demand exceeds our initial expectations or if there’s political disruption in the DRC.”

Spencer predicted the cobalt supply will not meet the huge demand in batteries and the emerging energy storage device market and that the current boom “will grow very strongly over the next ten years.”

Ontario provides a good option for cobalt exploration and mining for several reasons. More than half of the world’s cobalt is mined in the DRC, a country plagued by political instability and child labour in its cobalt trade. It is in battery companies’ interest to turn to producers with less tarnished ethical reputations. Projects are being developed in Idaho, Ontario, British Columbia, and the Northwest Territories.

Lithium-ion consumption is currently heavily concentrated in the Asian market, and the majority of battery cathodes are produced in China, Japan, and Korea, but both are growing elsewhere. “One of the new places it could take off is North America. This could present a wave of mines [like MergeCo’s] that could offload their material very easily to domestic producers,” said Spencer.

The fact that cobalt occurs with silver in Cobalt is significant. Cobalt normally occurs with nickel and copper and, given the current slump in both those metals, miners will not undermine their core business in their quest for secondary cobalt. The silver-cobalt deposits in Ontario are an attractive alternative, as silver has been in short supply for years.

Trent Mell, president and CEO of First Cobalt, is hopeful that modern geoscience and technology will allow First Cobalt to get cobalt-silver ratios of 50:50, up from the 20:80 of silver-mining days. These include transitioning mines to open pit in order to arrive at the solid base-metal halo around the silver shoots previously mined using narrow-vein mining.

Mell said he and Jason Bontempo, Cobalt One’s executive director, were united by a shared vision when planning the merger. “If you are going to give investors real leverage to cobalt, you need scale,” he explained. Historically the camp has been a string of small claims. “By bringing the three of us together we are going to control close to half of the prospective claims.”

Chitaroni echoed Mell’s hopes for more investment in the Cobalt camp. “We’re only at the beginning. All the companies right now are junior. At some point, there is the possibility of some much bigger money and senior companies’ influence. We aren’t there yet, but if it does happen, it’s going to change the whole fabric of the camp.”

Subject to regulatory approvals, Mell is hopeful the company will be formed by early November. The company board will include investor Robert Cross and members of Cobalt One and First Cobalt.