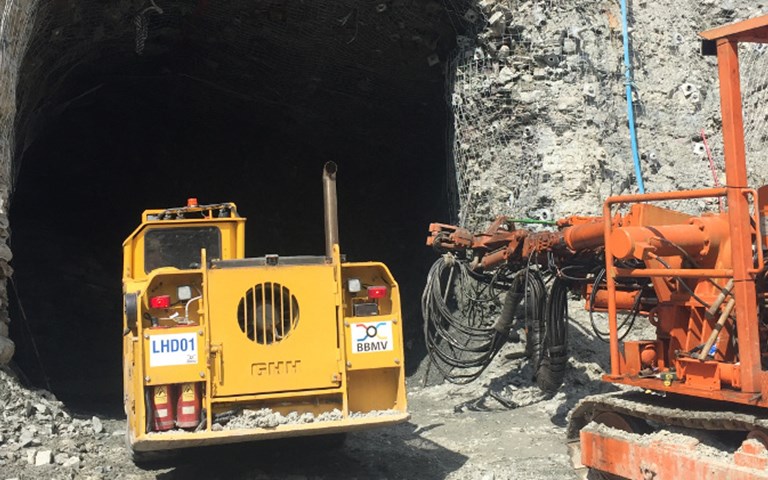 As of mid-May, and after three weeks of negotiation, Galantas Gold has “anti-terrorism cover” from the Police Service of Northern Ireland (PSNI) to blast two hours per day, three days a week at the underground expansion of its Omagh mine in County Tyrone.

The Toronto Venture Exchange listed-company had put its expansion work on hold in late April due to the PSNI’s “resource constraints,” when the service had offered just two hours per day, two days a week, which Galantas said in a release was “insufficient to sustain the development or operation” of Omagh. The company had hoped to have blasting cover for a two-hour period for five days per week.

“This is going to mean three blasts a week, which is not ideal for us but enables us to work with the PSNI and satisfy all of their security and resourcing issues,” Galantas CEO Roland Phelps told CIM Magazine. He said he expects the reduced blasting schedule will set the development back between six to eight weeks.

The rules around blasting supervision date back to the early 1970s, at the height of the Troubles’ sectarian violence. In 1972, the year with the greatest loss of life in the 30-year conflict, Northern Ireland passed an explosives order mandating the close supervision of blasting products and chemicals. Smaller explosives suppliers across the country were consolidated into one company, and quarries no longer kept blasting equipment on site.

The PSNI must provide anti-terrorism cover to all blasting work at mines and quarries in the country, which involves supervising the transport and detonation of explosives. But Northern Ireland has only two operating mines – Omagh, and a salt mine – and the blasting demands for hard-rock mining are far greater than even the most active quarries, making Galantas’s underground expansion and development on the country’s other gold project, Dalradian Resources’ Curraghinalt, more logistically complex for the police service.

“Hard-rock mining is new to us, and it’s a lot more intensive in terms of drilling and blasting,” said Roy Wallace, the vice-chairman of the Institute of Quarrying’s Northern Ireland branch. “It’s really a round-the-clock operation and certainly it’s not something police and security personnel are used to.”

Northern Ireland has around 90 hard rock quarries, Wallace said, which blast to crush stone aggregate into a size suitable for concrete and concrete products like asphalt. Busier sites blast once every ten days, and a smaller operation may blast once every two to three months. “So the frequency of blasting is much less than a mine would be.”

Decades ago, when tensions were much higher and a site needed to blast, an explosives company vehicle would be escorted in the morning by multiple armoured police vehicles and usually one helicopter, Wallace said, and, depending on the threat level in the area, army personnel would clear the route ahead of time to ensure against land mines. In particularly sensitive locations, explosives would be taken to an army base and flown to site in a helicopter. “The likelihood was that terrorists didn’t want to steal the explosives,” Wallace said. “They wanted to kill or injure security forces, blow up a truck and have a major scene.”

Today the level of security during escorts and on site has largely reduced, but is still required. “Since the Good Friday Agreement, the situation’s completely changed in Northern Ireland in terms of terrorist activity,” Phelps said. But “there are still dissidents who have to be secured against, and the PSNI is naturally and quite rightly cautious about the use of these kinds of materials.”

There are fewer personnel involved in the escort and no army involvement. Pump trucks filled with explosives are picked up at the depot in the morning and escorted to site, where between one and four policemen observe the blasting process. The PSNI has a specific group of officers who are able to supervise, Phelps said, which contributes to their resource limitations. “We have discussed [hiring an outside security service],” he said, but the PSNI “require that they follow this process, and at this stage they’re not prepared to consider contracting out.”

The supervision requirements also affect the four explosives suppliers in the country. Wallace said they impact the hours suppliers can work, and do not allow for drops at multiple sites. Suppliers must also book their blasts a minimum of two weeks in advance.

The PSNI declined a CIM Magazine request for comment.

The Omagh mine, which operated as a surface mine until 2013 and is currently being transitioned to an underground operation, will average 600 tonnes of ore per day over a current six-year mine life to produce a total of 148,000 ounces of gold. When it was initially being built, Phelps said, the open pit was mined mechanically. “Blasting wasn’t necessary for us before,” he said. “The excavators could do the work.”

Currently the company has established the portal to the underground workings at 40 metres, which required a few rounds of blasting, and is now developing the access tunnel to “open up the resource below the open pit,” he said. “That’s when we would have preferred a more extensive blasting.”

Phelps said the company is continuing to work with the PSNI to expand its blasting capabilities.